As Valentine’s Day approaches, we thought we would share one of Whistler’s lesser known love stories.

Bob Jardine first came to Whistler around 1921 with his family. He spent his childhood here, attending the first school in what was then Alta Lake. Later, at the age of 21, he joined the Air Force, where he spent the next 28 years. It was during his time with the Air Force that he met Stella Stracken. 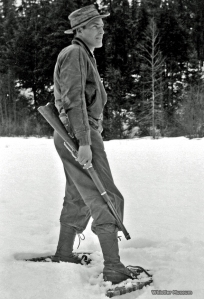 Bob worked in the fire department and Stella worked in the air man’s canteen as a steward. Although Bob knew Stella slightly, they never really spent a lot of time together.

One day, Bob received a telegram from his brother, which stated that he was going to be in Vancouver and asked if Bob would be able to go and meet him. The Jardine brothers hadn’t seen each other in five years, but the Air Force wouldn’t give Bob the time off.

During an argument with his superior over the matter, he was asked if he wanted a discharge. Bob said yes and he was given $100 for clothes and 30 days leave. So Bob went to Vancouver and had a month-long party with his brother. However, Bob became lonely and began looking for some work to fill up his time away from the Air Force. He ended up getting a job as a telephone lineman with the PGE Railway.

One day he went to work on a telephone pole near Function Junction. His boss asked him to climb the pole and make sure the lines were properly hooked up by calling the Vancouver operator and then ask to be connected to an outside number. Jardine pulled out his address book and happened across the name Stella Stracken. He couldn’t even remember who the girl was.

Bob decided to call the number anyways and her mother happened to answer the phone. He asked where Stella was and was informed that she had gone to work. He asked Stella’s mother to inform her daughter that he was coming to Vancouver that weekend and intended to take her out to dinner. That’s right — Bob Jardine scored a date with a girl he barely knew from the top of a telephone pole without even speaking to her directly.

So, Stella showed up for the date and Bob took her to a café. Not long into the date, Bob said, “This is a helluva time to mention this, but why don’t we get married?” At Stella’s justifiably shocked expression, Bob went on to say that they were never going to make a better connection with anybody else like the one they were making at that very moment, with each other.

Somehow, over the next two hours Bob convinced Stella to marry him. They were married for 58 years until Stella passed away. 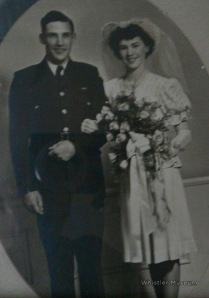 Bob and Stella on their wedding day.