This is part two of a post on the Jardine-Neiland family. For part one, please click here.

In early July 1922 the export log prices of cedar logs collapsed and so did Thomas Neiland’s business – he had to file for bankruptcy. The family pulled up stakes and went back to North Vancouver. Later that month, Lizzie gave birth to their son, Thomas Neiland Jr. at the age of 40. For three months, Thomas looked for work in Vancouver. Eventually persuaded by both a lack of employment and his wife’s desire to return to Alta Lake, he gained financing under her name.

The family returned to their Alpha Lake cabin, and in 1923 they moved into an old loggers cabin at 34 ½ mile that was being sold by the crown, and this became their home for the next 20 or more years. The house came with cases of milk, bags of dried beans, and slabs of bacon – according to Jenny, “the latter very much like a bit of leather.” Today, 34 1/2 mile is Whistler’s Function Junction.

Life for the Jardine-Neiland family was precarious. The children remember their mother saying, “It’s a case of feast or famine.” Sometimes business was booming, but at other times, particularly during the Great Depression, the family would have to survive on the damages payments paid to the children from the death of their father.

Jenny and Jack never went to school again after they left North Vancouver in 1921 – Jenny was eight and her brother was only six. They began working in the logging industry at the ages of twelve and ten. Although they did do lessons by correspondence, they rarely had the time or energy left to study. In her memoirs, Jenny recalls:

“I started to work out in the woods when I was 12, driving a horse – a big Clyde with a white face. Pa [Thomas Neiland] got a portable saw mill and set it up on the lower field…that meant log so many days and cut ties and lumber so many days. I lifted the slabs off as the circular saw slabbed them…We had correspondence school lessons to work on but somehow there was too many other things to do, so lessons were only done at night or if it rained.”

Life was somewhat easier for the younger children, Bob and Tom, as the school at Alta Lake opened in 1932, affording them a proper education. 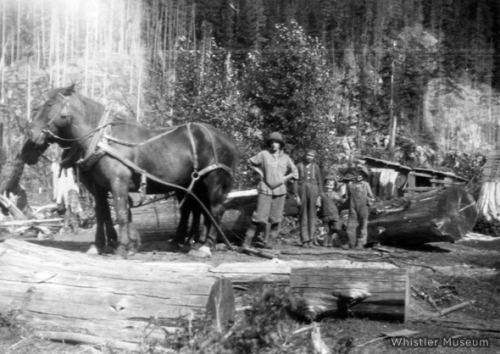 The Jardine/Neiland children hauling logs to the portable sawmill at 34 1/2 mile with the aid of horses, 1926. From left to right: Jenny, Jack, Bob and Tom Jr.

They had their mother to thank, as she instigated the building of the first school in the area. In 1931, a school assessment appeared on the tax notice even though there was no school. Lizzie had three sons and one daughter of school age. Bob recalled: “When she got the tax notice of $7.50 she got real worked up as money in those days was tight. She started a movement to look into the possibility of building a school.”

In order to keep themselves fed, the family sometimes had to resort to shooting a “government cow” – the tongue-in-cheek name for a deer poached out of season. According to an interview with Bob Jardine in 1991, they weren’t the only ones – other Whistler pioneers, including Bill Bailiff and Charlie Chandler, went after “government cow” in times of desperation. It certainly didn’t make for a tasty meal out of season. In that interview with her brother, Jenny conceded, “…to tell you the truth, when I shot a deer, it was awful tasting.”

When Jenny got married in 1937 and had children of her own, life remained challenging. Her husband, Wallace, also worked in the logging industry and the couple moved around from place to place on various contracts – many of them in Alta Lake. They spent a winter in a “…tar paper shack with two rooms” at Parkhurst, with their year-old daughter, Louise. For more on the community of Parkhurst, see these earlier posts: “Family Life at Parkhurst Mill” and “Exploring Parkhurst: Whistler’s ‘Ghost Town’.”

Tom Neiland senior lived at 34 ½ mile until his death in 1949. Lizzie stayed on in Alta Lake for a few more years until it became too much for her, and she sold the property and moved on. She lived to be 102, passing away in 1984.

Jack Jardine left the Whistler area about 1940, and logged in various places. By the late 1940s he married a woman named Irma and built a cabin across the tracks from where his mother was living on her own. When Lizzie sold her property, Jack and Irma settled in Squamish.

Bob and Tom Jr. both served in the Air Force. Tom went on to marry a British woman, and eventually retired in Calgary. As for Bob, he married a woman from the Air Force after asking for her hand in marriage on their very first date (that story is truly worth a read, and can be found here). Bob and his wife Stella retired to Kelowna.

Bob Jardine standing next to a large felled tree on Harry Horstman’s property, 1940

In spite of the many difficulties faced by the family, life was not all hardship at Alta Lake – the children have many fond memories of the valley. When Jenny permanently moved away from the area she was terribly homesick for the mountains and wildflowers, while Bob recounted many stories of being a cheeky little boy. At the age of 71, he still recalled neighbor Mrs. Wood’s horror when her daughter Helen arrived home with hair saturated with lamp black after a friendly “hand grenade” battle