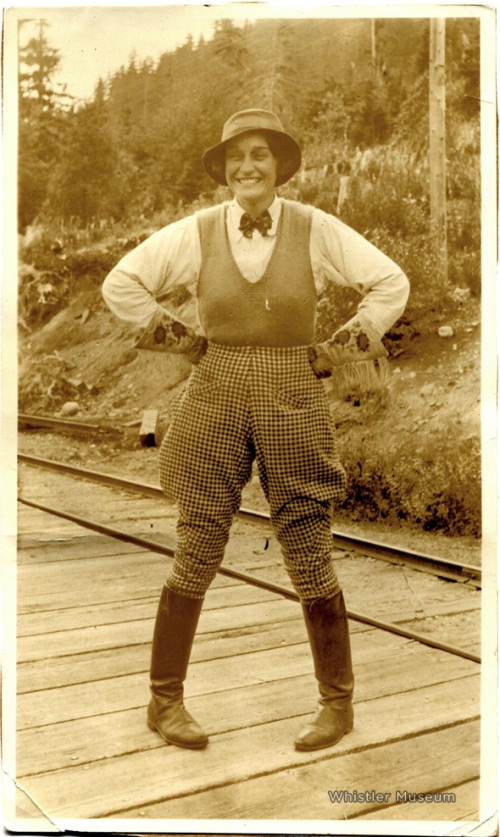 Myrtle Philip is the leviathan of Whistler’s history: her name is immortalized in the Myrtle Philip elementary school; she was the first person to be awarded the title ‘Freeman of Whistler’; there is even an official Myrtle Philip day! By all accounts she was a very special lady.  Incredibly gutsy, she could do pretty much anything – from building Rainbow Lodge by hand, to baking pies out on the trail, to guiding stranded railway men across the snow and back to civilization.  Myrtle Philip was certainly no wallflower.

The Museum is packed full of artifacts and archives relating to Myrtle and Rainbow Lodge. She was the first person to donate items to us, and it was Myrtle and another pioneer, Dick Fairhurst, who inspired Florence Petersen to start the museum. We have hundreds, if not thousands of photographs of Myrtle – I can recognize her instantly at any age from 19 to 90. We even have some silent film footage of her: fishing and with her beloved horses.  But despite this I had never heard her voice, save for a ten second clip on an old radio show.

So, imagine my delight when Kay Alsop, a retired journalist and good friend of Myrtle’s called me to let me know that she had some reel-to-reel tapes of an interview she had conducted with Myrtle in 1971 for an article for the Vancouver Province.

Kay had been sent up to Whistler to do a piece on Myrtle and the two of them hit it off immediately. Kay remembers,  “She was such a take charge kind of person – no nonsense…really a nifty lady and I could tell right off the bat that we were going to be friends.”

The museum has digitized the tapes.  All six reels come to around an hour’s worth of interviews: too much to put on a blog, but we can share some of our favourite excerpts for you here.

Firstly Myrtle discusses how she always wore breeches, despite the fact that women never wore pants at this time:

She also talks about the popular horseback riding excursions at Rainbow Lodge.

Myrtle talks of the horseback riding at Rainbow Lodge

Here she tells the story of how she met her husband, Alex Philip:

Hearing Myrtle converse in her broad Maine accent is really thrilling for us at the museum. We have been telling Myrtle’s story for 25 years – now Myrtle gets a chance to speak for herself.