Saudan Couloir Extreme was an infamous ski race that was held on Blackcomb Mountain starting in the spring of [1987]. With the race dropping 2500 vertical feet from the top of Saudan Couloir, down to the bottom of Jersey Cream Chair, it went on to gain an international reputation as a classic extreme race. 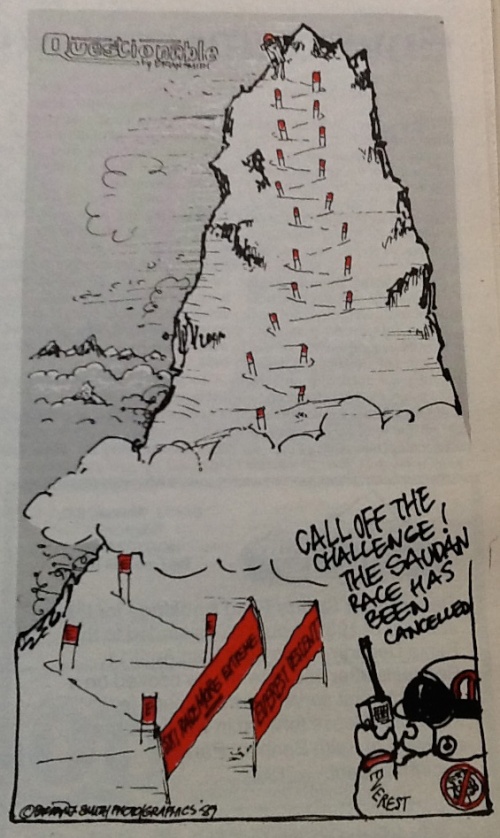 After the development of 7th Heaven, which opened up a vast area of mostly alpine and glacier skiing, Blackcomb Ski Resort began to develop an event that would profile its unique terrain. The Saudan Couloir run was chosen, as it was the only black diamond run in the area at the time.

Andrea Marchland. Fastest woman at the Saudan Couloir Race in 1992

The first 2 years the event was held, major snowstorms covered the run days before the race, and because grooming equipment couldn’t get down the 42 degree slope of the couloir there were major ruts on the course.

Chris Kent, a former member of the Canadian Alpine Ski Team, became the inaugural champion of the event, and held the title until Graham Swann ended his four year reign as king of the Saudan Couloir in 1991.

One of the amazing Saudan Couloir Ski Race Extreme posters designed by Brent Lynch. These retro classics can be found in hardcore homes throughout the valley

The Saudan Couloir became such a popular event during this period that TSN (The Sports Network), a popular Canadian sports channel, began filming the event to be broadcast as a 30-minute special.

Blackcomb Ski Resort produced TV Spots and highlight reels to help promote the event. The video below contains footage from the Saudan Couloir Ski Race Extreme held in 1988. With Mono Skis, on the fly tune ups, full spandex onesies, and a few yard sales, this was a race event that was not to be missed.