One of the most difficult, but fascinating aspects of history is trying to look back on past events without your view being completely skewed by hindsight. An obvious example, “Of course Whistler developed into an internationally renowned mega resort, look how amazing the [insert mountains/snow/forests/your preferred factor here] are!”

Nothing builds itself (except cranes, of course). So discerning those characters who foresaw the future and then helped make it happen is always rewarding. One such discovery was made while digging through our Cliff Fenner files. 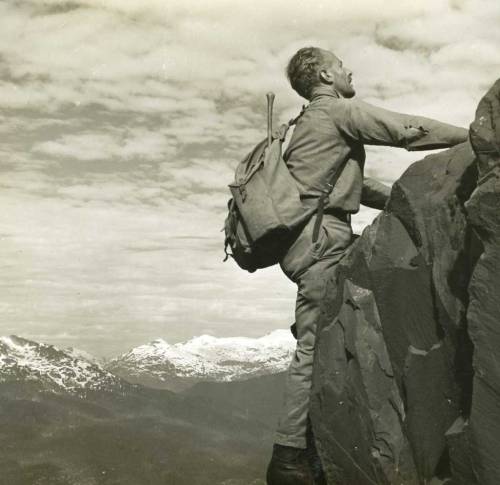 In March of 1960, Fenner, along with interested “press, radio and board of trade representatives” participated in a helicopter survey of Garibaldi Park in search of potential Olympic venues. Based out of Diamond Head Chalet (near today’s Elfin Lakes Hut), they even had skiers sampling specific runs to test their suitability.

Although the ski terrain was fantastic, it was during these reconnaissance flights that Sidney Dawes, Canadian representative with the International Olympic Committee, decided that it was not suitable as an Olympic venue because access was complex and the terrain even moreso.  A valley bottom development was preferred. Famously, Dawes selected London Mountain as the site for Olympic and ski area development.

Dawes rightfully deserves credit for the decision to develop Whistler rather than Diamond Head, but it is clear from Fenner’s reports that he shared Dawes sentiments. As the person on these flights with the most first-hand knowledge of Garibaldi Park’s extensive terrain, it is not unlikely that he helped inform Dawes’ decision.

A few weeks after the initial helicopter flights Fenner embarked on more ground- level observations of the Cheakamus Lake and London Mountain area. His snow measurements indicated similar depths to the Diamond Head region—more than two meters deep at 4800 feet (1460 meters) on March 19, a poor snow year according to Fenner—but with a more favourable climate that was slightly colder and drier than areas closer to the coast.

Fenner taking a rest from one of his many mountain explorations.

Moreover, he suggested that just west of Cheakamus Lake (that is, the Cheakamus Crossing and Function Junction area) would make an ideal base area development that provided great access to both the mountain and any potential highway linking Alta Lake to Vancouver. With the expected ski lifts Fenner described “immediate access to high level ski touring and summer hiking areas of tremendous potential, [especially] London Mountain to Singing Pass.” Clearly, there was some profound foresight at work here, no doubt the product of Cliff’s keen analytic mind and intimate knowledge of the south Coast Mountains environment.

One response to “Olympic (pre)Vision”