The story of Tapley’s Farm (yes, it involves farming).

With the sun coming out and vanquishing the snow from the valley, and next week’s Green Talk all about growing your own food in Whistler, now is as good a time as ever to look into the history of agriculture in Whistler. Last fall we featured a post providing a bit of an overview of the topic, so this week we’ll take a more focused look at Whistler’s most well-known farm, Tapley’s Farm.

Yes, that Tapley’s Farm: the quiet residential neighbourhood which also holds the distinction of being the Whistler Valley’s first attempt at employee-designated housing. Although the area didn’t get it’s nickname “Mothers, Dogs, and Children” (a play on the acronym for Mountain Development Corporation, which developed the subdivision in the 1970s), there was a family with far more animals than just dogs living off the land along the northeast shore of Alta Lake.

While Alex and Myrtle Philip are widely recognized as the founders of the the community of Alta Lake (even though they were not the first settlers), fewer people are aware that Myrtle’s family, the Tapley’s were here from the beginning as well. 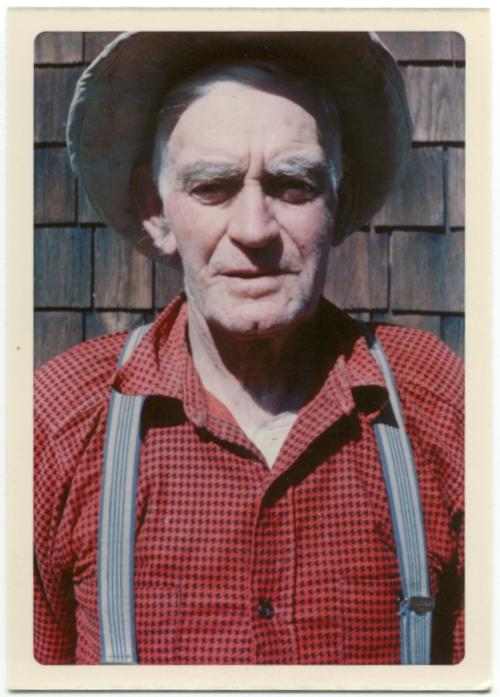 Myrtle’s brother Phil Tapley, looking every bit the farmer that he was, July 1967.

When construction began on the Philip’s Rainbow Lodge in 1913, they were assisted by Myrtle father Sewall, and her sisters Jean and Margaret, and her brother’s Frank and Phil. Once Rainbow Lodge was completed, Sewall moved in with Alex & Myrtle, Phil returned to his home in Squamish (he had first moved there from Maine in 1912), and Jean and Margaret moved further afield, though they returned often for visits.

In 1925 Sewall purchased a large parcel of level land running along the north shore of Alta Lake, including the marshes surrounding the River of Golden Dreams, from a trapper named George Mitchell. That same year Phil Tapley married Dorothy Disney of Squamish and together they moved north to clear and settle Sewall’s land (first, Myrtle had to convince her father that he was getting too long in the tooth to try clearing his own farm).

In ensuing years Phil, Dorothy, and eventually their daughter Doreen (born in 1926) cleared, developed and managed a productive farm with various grain and veggie crops, an orchard, plenty of cows, chickens, horses, and plenty of hay. In addition to producing the majority of their own families needs, they were able to provide plenty of milk, veggies, and eggs for other settlers and lodge guests throughout the valley, as well as hay for their livestock. 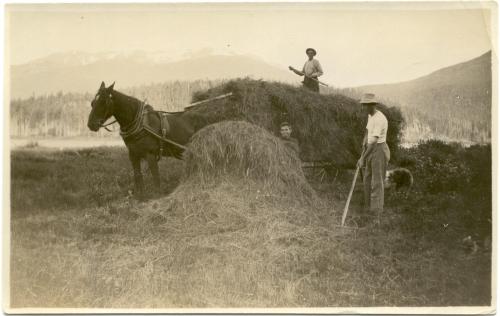 What appears to be Phil Tapley (on the wagon), Alex Philip (at right) and an unidentified helper haying along the shores of Alta Lake. Note the Blackcomb Mountain backdrop, with Couloir Extreme and Chainsaw Ridge plainly visible near the righthand skyline, and a far more extensive Horstman Glacier at middle.  Circa 1920s.

In every sense the Tapley’s were a model, self-sufficient pioneer family. In winter Phil also operated traplines in the surrounding mountains, and he was a keen adventurer. Dorothy was the only resident of the Whistler Valley to receive a Canadian Centennial Pioneer’s Medal in 1967.

Together they continued eking out a living through traditional means, pumping water from a well, and deriving heat and light from fire well into the 1960s, when the rest of the Valley was turning to modern conveniences such as electricity and plumbing. Dorothy passed away in 1968 at the age of 81, and Phil stayed on the farm for 3 more years until his death in 1971 at the age of 83.

Myrtle, Dorothy, and Phil in front of the Tapley farmhouse, circa 1960s.

The Tapley’s exemplify perhaps better than any other Whistler Valley residents the potential to draw sustenance from the Earth, even in harsh climates such as our own. They should serve as inspiration to any Whistlerite frustrated by their inability to grow a ripe tomato, or a crisp head of lettuce.

While waiting out changes to local agriculture by-laws (don’t hold your breath), you can beef up on your cultivation knowledge this Wednesday evening at the Whistler Museum, as AWARE hosts a series of short presentations all about overcoming the many present-day challenges of growing your own food in Whistler: from soils and sunlight, to selecting seeds, maximizing your growing space, and bear-proofing your crops. Hope to see you there!