The arrival of summer (especially the summer-like weather we are currently enjoying) is universally admired, but with it comes the increased risk of wildfires. Despite our relatively wet climate, fire season is a reality in Whistler. A great deal of our valley has burned within the last century alone.

Throughout this summer we will share a series of stories about the history of wildfires in our region, making use of the remarkable amount of information that has been assembled through the Whistler Forest History Project. Through these stories we hope to provide a better understanding of the active role that wildfires have played in shaping our valley.

All of the wildfires in the Whistler Forest History database. You may notice the absence of the recent high-profile fires on Blackcomb Mountain. Those have not yet been added to the Forest History Database, but we’ll discuss those fires in detail in a future post.

First off, we’ll start with two photos taken by Myrtle Philip that are now in our archives. Looking northward from Rainbow Lodge, the images portray massive columns of smoke billowing up from the lower east flank of Rainbow Mountain,  approximately where Alpine Meadows is today. 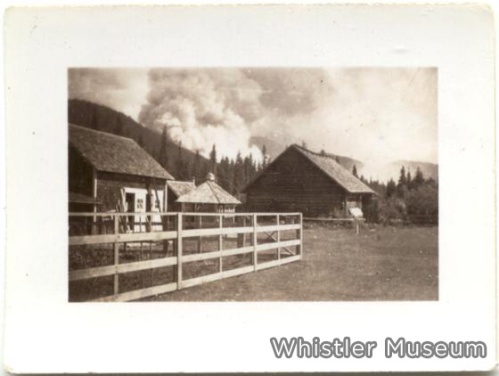 Quite the raging fire. As is the case with many of our archival photos, especially our older ones, we have limited information about the image. By the time the Whistler Museum formally acquired the few thousand photographs in the Philip collection in the 1980s, memories were already fading, and only sparse details could be recorded for most acquisitions. We knew this photo was taken from Rainbow Lodge, likely mid-1920s to to 1940s, but that’s about it.

Now that the Forest History Project has compiled a comprehensive database of virtually every large forest disturbance (logging, wildfires, urbanization and other development, etc), using a combination of historical aerial survey photographs, Forest Service records, and other archival research, we have the opportunity to get a bit more of the story behind the photos.

The database isn’t 100% complete, but it’s virtually certain that a wildfire as large as appears in the above photos was not missed. Plotting only the wildfires in the database into Google Earth, then zooming in on the Alpine Meadows region, we get this:

Wildfire history of the Alpine Meadows area since 1914.

Judging by the Rainbow Lodge buildings in the photo, as well as the location of the smoke, it’s probably not the 1920 fire (burning roughly on the flats where Mons and Nicklaus North lie today). That leaves 1940 or 1943 as possible dates for the photos.

So we’ve managed to add a bit more background info for some archival images, but more interestingly, those are pretty massive fires, right where Whistler’s largest residential neighbourhood sits today! The 1940 fire in particular covers more than 3 square kilometres of terrain, encompassing the entirety of Alpine Meadows and Rainbow.

It is easy to take for granted the protection we are afforded by a modern wildfire management service, but these images demonstrate just how common large fires such as these would be in this valley without human intervention.

In future wildfire-related blog posts we’ll look at the effects of lightning strikes in triggering fires, and recount the massive 1919 Cheakamus Canyon fire (the massive brown splotch near the bottom of the first image) that took out several PGE railway bridges, leaving Rainbow Lodge isolated for several months before they were re-built.

FYI: As of Friday afternoon our wildfire hazard rating is 3 out of 5, or “moderate.” A moderate rating is characterized as “forest fuels are drying and there is an increased risk of surface fires starting. Carry out any forest activities with caution.”

Practically speaking, this means that there no major changes to restrictions on outdoor fires (these come at level 4, “high”), but the risk of human-caused wildfires spreading out of control is certainly present. Our current wildfire danger rating can be found on the BC Wildfire Management Branch’s website (on this comprehensive list for the coastal fire section, Whistler’s rating is listed under “Blackcomb Base”).

One response to “Whistler’s Wildfire Past: Alpine Meadows is Burning”