Whistler’s Wildfire Past, part 2: Burned into the Landscape’s Memory

The Coast Mountain landscape is full of stories. You just need to know how to read them. The grandest of these tales recount violent clashes between volcanic lava and glacial ice, expressed through landforms such as the Table, the Barrier, and Black Tusk in Garibaldi Park. If you know what to look for, however, there are plenty of signs of past wildlife activity to be identified from our surroundings as well.

Our mountain environment is highly varied so it is difficult to characterize our region’s wildfire activity too specifically. Generally speaking, however, the average wildfire interval for coastal forests is 750 years. This means that any given point in a coastal landscape is prone to burn, on average, every 750 years. 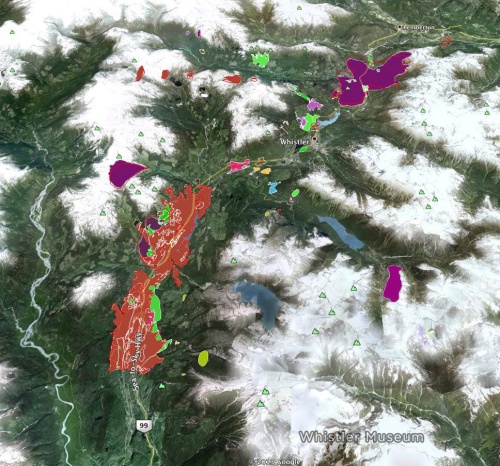 Major wildfires in the Whistler region from the last 100 years. The large purple blotch at the top right represents the 1926 Soo/Green fire.

In the Whistler Valley, like most other populated valleys, the incidence of wildfires actually increased during the 20th century due to the large number of human-caused fires, especially those caused by railway activity. (Check out this blog post for some cool insights into railway fire suppression in the 1940s, not to mention Rainbow Lodge booze runs and the dangers of playing chicken with a freight train).

The point being, at any point in time, large swaths of our our forests are in the process of recovering after a wildfire disturbance. Fire is an essential aspect of the life cycle of the Douglas Fir, the dominant tree species in our Coast Mountain valleys. They thrive under direct sunlight and grow fast and straight, allowing them to grow quickly after wildfires and clearcuts. They also have extra thick bark that acts like an armour against flame. This last point is crucial.

Even if only a handful of Douglas Firs survive a wildfire, these “resids” (short for residuals) are well-situated to re-seed the disturbed area and kickstart the forest’s regeneration. A few decades after a large wildfire, you will often find a few scattered, mature douglas firs surrounded by a  uniform forest of younger growth.

Heading north from Whistler on Highway 99, just before the Soo Valley turnoff, you can clearly see some trees that stand well above the rest of the forest. They are a few of the survivors of a massive wildfire from the mid-1920s that destroyed much of the surrounding forest. 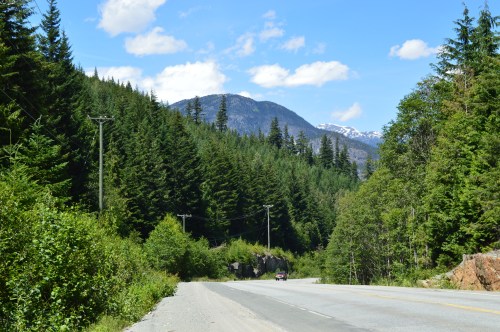 A handful of “resids” stand head and shoulders above the regenerating forest that they helped re-seed.

Checking back in with our wildfire data from the Whistler Forest History Project, there was a massive wildfire around the junction of the Soo River with the Green River in 1926. To fully appreciate a fire of this scale, you need a bird’s-eye view. Luckily enough, there is a lookout  up the Soo Valley Forest Service Road that was designed with just this purpose in mind. 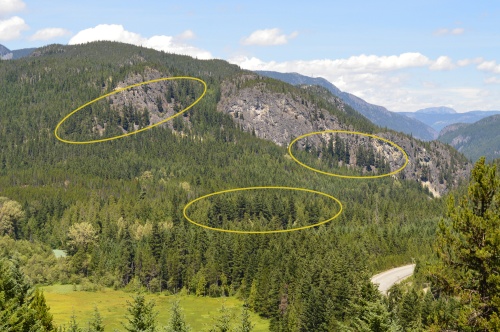 The view from the lookout. 3 clusters of Douglas Firs that survived the 1926 wildfire are are easily identified. They are substantially taller and darker than the surrounding forest. The upper two clusters are located beside rock clearings on the periphery of the fire, while the lower cluster is on the banks of the Soo River, which is hidden from view. Highway 99 is visible at lower right.

From this higher perspective you can see a few more groupings of residual douglas firs. You can also get a sense of just how uniform the regenerated forest is, as the entire swath of burned forest was recolonised by seeds from a small number of trees over a short period of time.

Finally, looking across the highway at Mount Currie you can find the upper limits of this massive, historical fire. If the boundary lines were a bit straighter you might mistake them as the edges of old cutblocks. 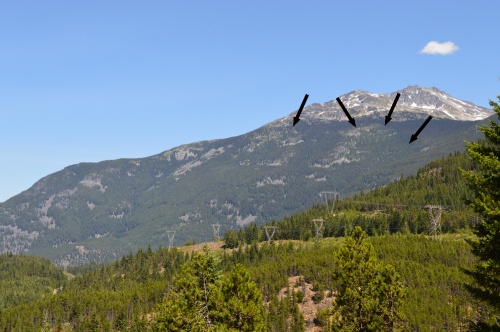 Nearly 90 years later, the upper limits of the wildfire are still plainly visible along the upper west flanks of Mount Currie. 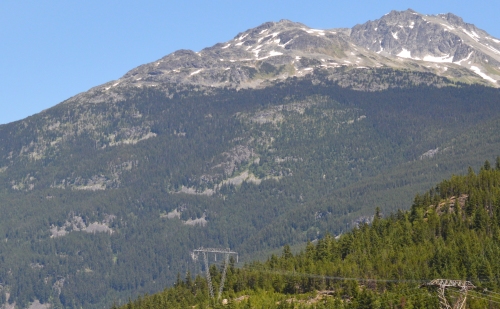 A close-up of the previous image.

This is far from the only identifiable wildfire landscape in the area. Other prime spots are Cheakamus Canyon and Pemberton Meadows (Tenquille and the Camel Humps, specifically). Anywhere else?

Much thanks to Rod Allen of the Pemberton Fire Base, and John Hammons of the Whistler Forest History Project for their help with this series of posts about wildfire history. Check out part 1 here, with more instalments to come throughout the summer.

One response to “Whistler’s Wildfire Past, part 2: Burned into the Landscape’s Memory”