As we celebrate Bear Month here at the Museum, we thought we would tell the story of Whistler’s most famous bear, Teddy. Whistler has a long history of living with bears, but very few instances take the “living with” part quite as literally!

In the spring of 1926, Myrtle Philip and some guests from her Rainbow Lodge were out berry picking in the forest when they heard what sounded  like a crying baby. They went to investigate and found a bear cub. They could not find the bear’s mother, and since such a young orphaned cub had very little chance of surviving they decided to take him back to Rainbow Lodge. 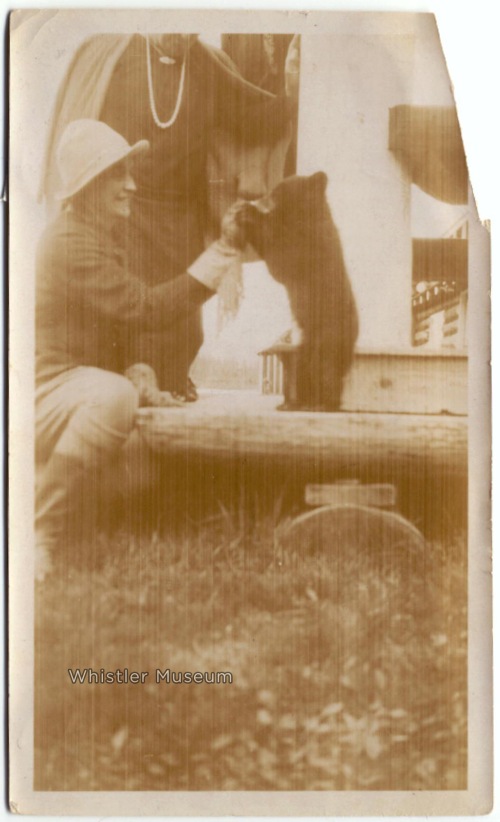 He was named Teddy the Bear, and he soon became very popular with all the guests and staff at Rainbow Lodge. Teddy was the lodge’s unofficial mascot for the summer. He seemed to especially enjoy climbing, eating treats, and cuddling.

Over the summer Teddy grew, as bears tend to do! Myrtle knew that Teddy could not stay at Rainbow Lodge, but was probably too domesticated to survive in the wild, so she contacted a friend at the Stanley Park Zoo in Vancouver to see if they would be willing to take Teddy. The zoo officials wrote Myrtle back right away saying they would be happy to take him.

Myrtle made the trip down to Vancouver with Teddy a few weeks later. Myrtle was sad to leave behind Teddy, she had become very attached to him, but she knew that she could not keep him. After that, whenever Myrtle was in Vancouver she would try to go and see Teddy at the Zoo.

For many years Teddy would recognize the sound of Myrtle’s voice and would go running over to her when she called his name. Myrtle would spend hours talking to Teddy, even having conversations with him that consisted of them grunting back and forth to each other.

Although the other zoo visitors surely thought she was some crazy wilderness lady, talking to a bear, Myrtle did not care. She loved Teddy, and was just happy to spend some time with her old friend.

As part of Bear Month, we are holding 3 consecutive “Family Bear Days” on Saturday August 17th, 24th, and 31st. Each Bear Day will feature a unique presentation by local bear researcher Michael Allen, followed by a fun bear-themed craft activity. The activities run from 2-4pm at the Whistler Museum, and are included with a regular museum admission. See you there!