This year marks the 30th anniversary of the Peak to Valley race, taking place January 31st and February 1st 2014.

The Peak to Valley race is a very unique race that has a definite place in Whistler’s history. The brainchild of legendary ski-racer, Dave Murray, the race starts at the (almost) top of Whistler Mountain at the Saddle and finishes at Creekside.

Judging by interviews with the racers a lot of the Peak to Valley is about overcoming pain. Whistler resident Sarah Lynch described the experience in 2010 “I was just trying to remember to breathe and then your legs are just burning.”

Alongside the pain however comes a lot of fun and camaraderie. The Peak to Valley is not just for professional racers; anyone can join in – if they dare! The fastest time on record is 4.52.03 – the longest – 29.03.50. Despite these discrepancies both record holders had an awesome time taking part.

The race is a team effort with four people per team. Teams must have at least one woman and all must be 19 or over. Two team members race on the first day and two more race on the second. Their times are combined and the winning team is crowned.

There have been some questionable conditions facing the racers over the years, but to date, no race has ever been cancelled. In 1991 the weather was so stormy that the entire mountain was closed, but the race still went ahead. Racers could upload on the Olive chair and then get a snowcat the rest of the way up, as the conditions were too dangerous for a lift to be run. One racer, Simon Wiruntene from the New Zealand National Ski Team even hiked up, as he knew he was one of the last to start, and actually managed to get the fastest time of the day! 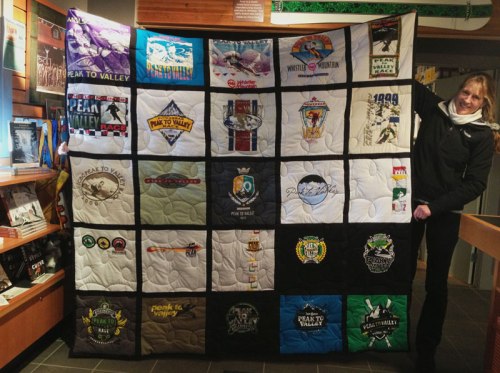 Quilt up for auction: Made out of the race T-shirts spanning the entire history of the Peak to Valley Race

Quilt up for auction: Made out of the race T-shirts spanning the entire history of the Peak to Valley Race