A Bear, a Cougar and a Boisterous Myrtle Philip

Every now and then a long term and frequent visitor of Whistler will grace us with their stories of this valley’s past. Gordon Cameron is one such character. As a young man, Gordon (also known as G.D.) would spend summers at Alta Lake with his family. A few years ago, Gordon wrote two letters to the museum outlining some fascinating stories from his childhood here in Whistler. One story he recalls involves a cougar, a bear, and a boisterous Myrtle Philip.

Firstly, to paint a better picture of Gordon and Myrtle’s relationship, Gordon explains Myrtle’s unorthodox method of teaching a young G.D. how to ride a horse. Basically, Myrtle tied Gordon’s feet together underneath the horse’s belly and let boy and animal be! The horse reluctantly traipsed around Alta Lake with the boy strapped firmly astride for most of the day, until it finally managed to shake loose the ties and buck the young Gordon into the River of Golden Dreams. 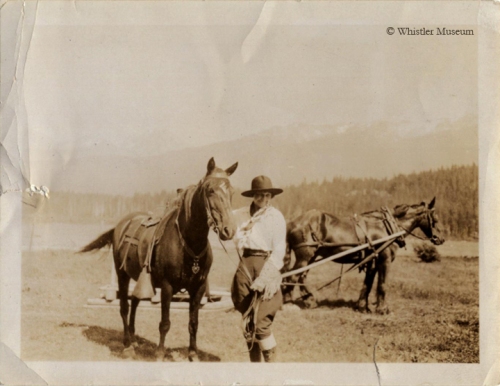 In 1934, a few years after Gordon’s unconventional horseback riding lesson, Gordon and some other boys in the area were recruited by Myrtle to fix a trail that often flooded in high run-off years. The crew got to work slashing the bushes to make the trail wider, while one of the boys held the horses. All of a sudden, one horse bolted; everyone stopped to see what was happening only to observe that just down the trail was a mean looking black bear sniffing the wind. The crew turned to their escape route and had the unpleasant sight of a large tawny cougar stalking towards them. Whilst the boys were scrambling their thoughts into some sort of action, a “whoop and a holler” was heard coming up the trail “in a slightly off-key feminine voice that would have curdled the milk.” Faced with such a vision, the bear took off straight up the mountain and the cougar took one look at the apparition coming charging down the trail and disappeared. Myrtle was so mad, she let off steam in a language that was certainly not “ladies chit-chat.”

As if we didn’t have reason enough to adore Myrtle and her courageous ways!