Grizzlies in the Valley

As most of us are well aware, wildlife is constantly in flux. Species come and go; they migrate; they evolve; they become extinct. These transitions are especially evident living in Whistler, as wildlife surrounds us, so much so that one of the first things I learned when I got here concerned our ever-changing mammal population. I quickly learned that although grizzly bears once roamed our valley, they have since moved on from this social, tourist town.

Recently, the museum acquired the book Mammals of the Alta Lake Region of South-western British Columbia by Kenneth Racey and Ian McTaggart Cowan, published in 1935. This fantastic account eloquently outlines the various mammals that were known to exist in the Whistler (then Alta Lake) region. The account of grizzlies is slight, with only a few documented sightings before 1935; however, we know that an abundance of brown bears made their homes here in Whistler for many years before humans moved in.

Grizzly bears were common to the alpine meadows and adjacent timber of the Whistler region. On June 26th, 1924, grizzlies were seen in Avalanche Pass, between Mount Overlord and London Mountain (now known as Whistler Mountain). Could you imagine seeing a grizzly around Whistler Mountain today? Of course, there is far too much excitement around the mountain for a grizzly nowadays, as brown bears require a great deal of personal space.

The book states that the latest grizzly bear tracks were sighted on December 5th, 1932, by John Bailiff; however, there have been grizzly sightings in Whistler since the book’s publishing. The most recent occurrence was in Function Junction in 1989. Sadly, the bear was shot by an RCMP officer after it displayed aggressive behaviour toward local dogs.  There are also reports that claim that the RCMP officers did not have the necessary expertise or equipment to safely tranquilize and relocate the animal.

By now it is common knowledge that grizzly bears are rarely spotted in and around Whistler, but we have also seen a great decrease in brown bears across the Sea to Sky Corridor in general over the last century. This steady decline of the grizzly population began with a vengeance during the twentieth century, and was unsurprisingly largely man-made.

Aside from Racey and Cowan’s book, the museum holds a few other accounts of brown bears in Whistler, including photographs of hunted bears, as well as a newspaper article by John Bailiff about his attempt to hunt a mother grizzly in the 1930s. Bailiff’s article is a rather upsetting read, as he takes us through his excitement at the thought of killing the maternal bear, with seemingly no compassion for the cubs alongside her. Thankfully, times have changed and continue to progress toward attitudes and laws that protect these ursine beauties that roam British Columbia. 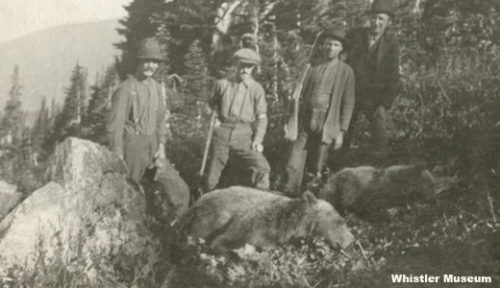 For more information on bears in Whistler, and how you can be bear smart, visit the Bear Smart Society.