For those of us at the Museum who have not worked, or lived, in Whistler for long, it is always great when people who had lived around Alta Lake in the early days drop in and say hello. It is wonderful to get firsthand experiences of Whistler’s history and to take our eyes out of the archives. This is what happened last week when a couple came in to see if the Museum had a book they were looking for. Through our discussion they told me about a suitcase race that was held on Blackcomb Mountain in the 1980s. This peaked my interest, as anyone traveling down a ski hill in a suitcase sounds amazing. I went to the Whistler Library to dig through old copies of The Whistler Question to see what I could find. There was surprisingly little information to be found about what I assumed would be a hilarious event to bring athletics and non-athletics together. 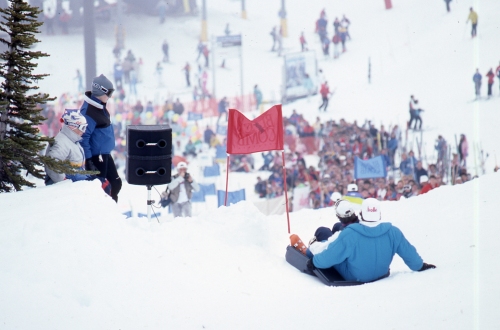 It seems that the first one took place on March 10th, 1984 and was called the Samsonite Media Celebrity Race. The event description in the Whistler Question went as following:

To be held on Blackcomb Mountain, possibly the downhill of the decade ­– a definite “photo opportunity.” Celebrities and press alike compete on a treacherous two-part course. The course is a downhill designed for racers piloting the latest in Samsonite’s Nagahide bobsled. Only Samsonite could take this beating. Definitely a spectator’s event. Free admission, refreshments available.

My favorite part of this is that there are very little clues as to what is going to take place but that “Only Samsonite could take this beating.” On March 15th, 1984 there is a small mention of how the event went in The Whistler Question’s Notes from All Over section. Stating that the MC of the event, Greg Lee, did a great job announcing the race in both French and English and that Dennis Waddingham’s racing helmet was a good idea.

A year later, on March 14th, 1985, an article was published in The Whistler Question about the event now called the Chillers Suitcase Slalom.

Sliding down a mountain on pieces of metal and fiberglass is one thing. But how about doing that in a suitcase? For a slightly different downhill experience, the Chillers Suitcase Slalom on Blackcomb is the prefect solution. Organizers are calling it a soapbox derby on snow. The jury’s still out on what the competitors will call it. The suitcase slalom will take place on a specially prepared 100 m course on Chair 2 Sunday March 31 at 2 p.m. Teams of two with each participant sitting in one half of an open suitcase race head-to-head against another team. Blackcomb provides the suitcases. The race is designed for anyone working for a Whistler business…“It will be the best laugh of the spring,” say organizers.

In the April 4th 1986 The Sports Column by Mike Youds, Youds pokes fun at the National Ski team stating that the team “ought to bypass summer training camps and enlist team members in hotel and restaurant jobs to get them in shape.” He goes on to report that the teams in the hospitality trades performed much better than any profession or trade in the race. “Even the airline industry, with two of the Murray brothers on the team (no on could boast as much air time as these guys have) couldn’t catch up with the likes of the Creek House Canines and the Highland Highballs.”

This event was then co-opted by the Pepsi Celebrity Ski Invitational in 1987, which I will discuss in Part two of the Suitcase Race Blog next week.

One response to “Suitcase Race (Part One)”