A Prime Minister in love

Throughout the decades, the grandeur and excitement of Whistler has inspired a lot of couples to spend their honeymoons at our beautiful valley hideaway. Roots of Whistler’s honeymoon history date back to the 1920s when Rainbow Lodge was one of the main destination accommodations for newlyweds on the west coast. Alex Philip, proprietor of Whistler’s first lodge, would paddle honeymooners down the River of Golden Dreams in a large canoe, often by moonlight, where they could snuggle up and soak in the valley’s natural beauty.

After an afternoon of skiing, the Prime Minister and his bride attended the Sunday Catholic service in the Whistler Skiers’ Chapel. March 1971, Whistler Mountain collection.

The most famous honeymooners in Whistler are undoubtedly former Prime Minister Pierre Trudeau and his bride, Margaret. Pierre Trudeau was a 48-year-old bachelor when he became the Prime Minister of Canada in 1968. In March 1971, the hearts of many Canadian women were broken upon the announcement that Trudeau had married 22-year-old ‘flower child’ Margaret Sinclair. They surprised the media with their secret wedding in Vancouver, and afterwards drove directly to Whistler for a three day stay. Here, the newlyweds took a skiing honeymoon, media in tow, with everyone excited about the refreshing hipness of Canada’s First Couple.

The couple stayed at the Sinclair family condo in the Alpine Village complex near the base of the lifts. “This was the second ski holiday at Whistler for Mr. Trudeau” proudly reported the Garibaldi’s Whistler News later in their 1971 spring issue, including three pages of colorful, side-filling photos of the couple. The news also commented on the couple’s ski skills: “Mrs. Trudeau is a good and stylish skier who is able to keep up with her husband. At one point during their stay at Whistler, Trudeau announced that his wife was a better skier than he is. ‘It’s not true, it’s not true’ she laughed.”

Mrs. Trudeau, the former Margaret Sinclair of West Vancouver, had a season’s pass at Whistler and skied the mountain many times before her marriage. This photo shows her skiing with Jack Bright, General Manager of Whistler Mountain. March 1971, Whistler Mountain collection

Victor Irving, a RCMP officer in charge of the Prime Minister’s security at that time, shares a sweet anecdote of the Whistler honeymoon in the book Pierre: Colleagues and Friends Talk about the Trudeau They Knew. He remembers to drive the Trudeau’s to the Sinclair condo in Whistler after the secret wedding which was by then no secret anymore. “The next morning I received a request from them for ice cream and all the Vancouver papers. I delivered these, leaving the happy couple kneeling on the living-room floor reading the papers. (Pierre still owes me $5.75.) “ 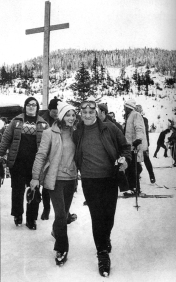 Margaret included this photo of her honeymoon in her memoirs Changing My Mind and noted: “Both athletes, we chose to spend our first day of marriage skiing at Whistler.” Source: Changing My Mind by M. Trudeau, Harper Collins Publishers

Also, Margaret remembers that first honeymoon morning in Whistler in her memoirs Changing My Mind: “We were woken next morning at 6:30 a.m. by the telephone. The queen was calling to congratulate Pierre; she had got the time difference wrong. Later came a telegram from the president of the United States, Richard Nixon. Scary, but also the stuff of fairy tales.”

Looks like, when it comes to fairy tales, our enchanted Whistler is the right place to be.