Alpine caretakers recall their stories from above the tree line.

It’s a stormy January evening in 1987. At the top of the Red Chair (also known as Tower 18), an empty chair swings around the bull wheel, its weight rocking it back and forth before propelling it back down the mountain. It disappears quickly into the blinding snowstorm. 23-year-old Janet Love Morrison picks up the phone, and calls the mid-station: “Last chair arrived, number 62, we’re clear.” She hits the red button and steps out of the shack. It’s 5:30 p.m., pitch dark. Now that the last person has downloaded, she zips up her coat a little higher, steps off the ramp and heads for the Roundhouse. She locks the front doors up for the night, questioning the necessity. By day the restaurants are filled with thousands of skiers; by night the high plateau belongs to the packer drivers, her, Gordy Rox Harder and a few ravens. 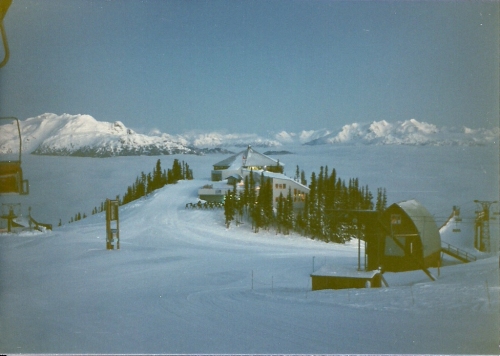 There is nothing as stunning and peaceful as living in the mountains: The view from Janet’s and Gordy’s kitchen in the Alpine Service Building was unrivalled. Photo courtesy: Janet Love Morrison, Gordy Rox Harder

In the late 1980s, Janet and Gordy lived as alpine caretakers on top of Whistler Mountain for almost two years. Clearing the Red Chair lift was one part of their unique and – as one can imagine – very coveted job. Gordy earned his salary as a carpenter and Janet got paid eight dollars an hour, free rent, hydro, and ski passes. Priceless, of course, are the moments when they were the only souls in their mountain kingdom, enjoying V.I.P. seats in front of the afterglow scenery while the whole valley was in the shadow yet. They also had the best opportunities to ski fresh powder. Janet remembers that she sometimes would ski to the valley as soon as it was light: “The valley gondola opened at 7 a.m. to upload staff and I would get in a couple of alpine to valley runs in complete aloneness.”

Janet and Gordy remember that getting groceries was always an interesting affair. In between them and the grocery store in the village, there was a 45-minute trip up the four lifts from the village to the top of the mountain. “We never wasted a trip, every time we were in the valley we’d bring something up” they recall. If they had been done a big shop in Squamish everything was loaded onto the Creekside Gondola, and then offloaded at mid-station and reloaded onto the Red Chair. “One of us would go ahead on the Red Chair, while the other loaded numerous milk crates full of our groceries. Who ever got off at the top would unload the crates. Then we would ski them over to our apartment.”

The position of alpine caretaker first began in 1978 with the completion of the Alpine Service Building close to the top of the Red Chair. In 1987/88, there were actually three teams sharing the positions: Gordy and Janet lived in the alpine (2,100m); their neighbours Laird Brown and Colleen Warner lived at mid-station (1,350m); and Sandy and Molly Boyd lived in the valley (650m). In the summer of 1988, the Express Lift was installed from the village to the alpine, and the position was terminated. The mid-station position remained for another winter, and the valley caretaker position until 1992.