A few Whistler locals have taken it upon themselves over the years to display their own mini collections of items that show off Whistler’s history. One of these collections covers the walls in “Mountain Paint” located in Function Junction. There are pieces all over the store when you walk in but it is hard to miss the multitude of posters and other paraphernalia that cover the walls at the back of the store. 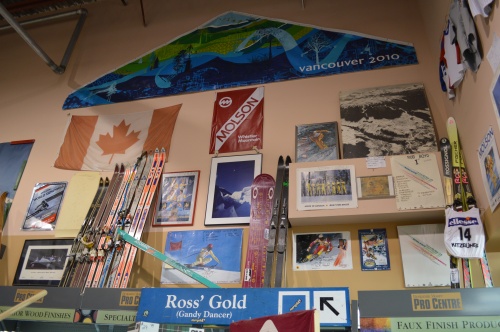 Just some of the collection amassed inside Mountain Paint

Dave and Laura Kinney took over Mountain Paint 20 years ago and almost immediately their collection found its home on the walls of their store. When asked, Dave recalled that his daughter, who is an interior designer, did not want her parents’ home looking like a ski bums home, so she had Dave and his wife move the collection into the basement which is where Dave took them from to decorate the shop. 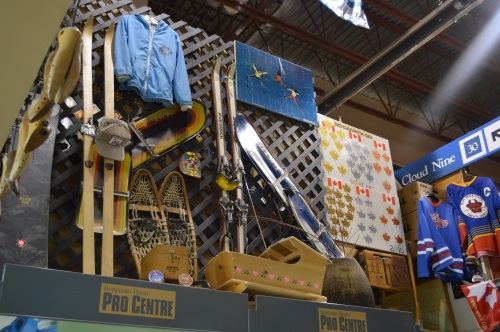 Since then many more pieces have joined the others on the walls including many things donated by Rob Boyd and Gord Harder. The Whistler Museum and Archives has a few of Gord’s items on display including his old fridge and mountain bike.

Dave and Laura both worked for Whistler Mountain for 10 years between 1979 and 1989, and even lived at the top of the mountain for some time. This was how they became friends with the Boyd family who lived at the base of the mountain. When they started working for the Mountain though, it was still run by the Garibaldi Lift Co. and so the couple saw it through its transition into Whistler. Dave tells of when he used to work in maintenance for the company and when it came time to change the signage on the outside of the buildings, Dave took home one of the old Garibaldi signs rather than throw it away. Coincidentally, he and his wife now live on Garibaldi Way, so Dave has turned it into their address sign. The pair also has a red chair from the old chairlifts hanging from their front deck.

Most of the couples collection is built upon old newspaper clippings from the Whistler Question and Answer as well as posters collected throughout the years as Whistler Mountain grew into what it is today. Yet, Dave’s favourite piece they have on display is two pages of an old Maclean’s magazine article from 1961 entitled “Skier’s Dream.” The article is all about the plans for the Whistler area and how great it was going to be long before the Mountain was actually opened in 1966. 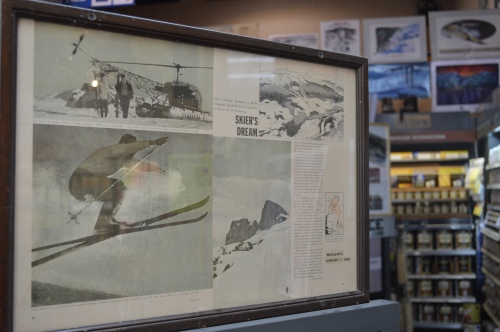 Dave fondly refers to his collection of items as a “community collection” because not only have prominent members of the community donated to it, but it is largely viewed and appreciated by the community as well. It allows people who see it to look back on the growth of Whistler and see how far it has come.