This summer, as we made our way through digitizing the Whistler Question Photo Collection, I may have come across the Whistler’s first ever Off-Road Bike Race. The first race took place on June 20, 1982. 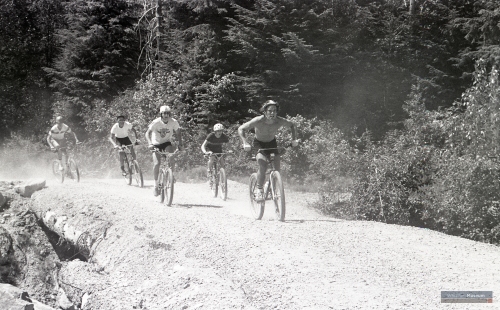 “The racers then headed out to Lost Lake and to the power line road which runs along the east side of Green Lake. From the Wedge Creek turnoff they headed back via Mons and the Lost Lake trail again.”

Jacob Heilbron said “The Whistler Race may have been called the Canadian Championships but there was no governing body for mountain bike racing at the time. As far as I know it was the first mountain bike race held in Canada.” 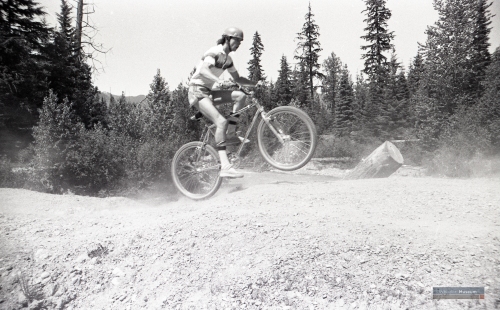 It wouldn’t be until 1984 and the formation of CORBA (Canadian Off-Road Bicycle Association) that the first official Canadian Championships would take place on Vedder Mountain.

Heilbron said, “There were no rules, so I switched to a road bike and picked up around 3 places on the section of highway heading back to town. Then I switched back to a mountain bike as we crossed back into local trails and tried to find the lightly marked trail on the way back to the finish.”

The first prize was $1000 as recalled by both Chaz Romalis and Jacob Heilbron. The organizer of the race was Jon Kirk. Chaz mentioned “he was responsible for the Deep Cove Daze, which brought thousands of spectators to watch a crit race in the late 70s and early 80s.”

Heilbron also recalls “There was definitely some confusion about who had completed the entire race and what place they had finished.” 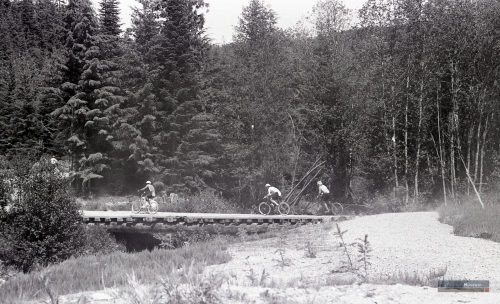 Chaz Romalis, owner of the Deep Cove Bike Shop in North Vancouver, recalls “ I was in second place and I was descending the hill from the Microwave Tower when I crashed out of the race.”

Mark “Straight-Ahead- Fred” Rowan unfortunately didn’t finish the race. He said, “I rode a cyclocross bike and my front tire caved in and I injured my face.”

The original article, appearing in the June 24, 1982 issue of the Whistler Question, mentions the winner of the race, “Tony Starck, 22, from Victoria had purchased his bike only 3 weeks prior.” Starck was the first Canadian Champion of Off-Road Bicycle Racing.