The Peak to Peak Gondola between Whistler and Blackcomb was built in 2007 and 2008. The idea for the gondola was conceived so that skiers and snowboarders could ski both mountains without having to go through the village or take multiple lifts to get to the other mountain. The original idea was to have lifts that went down the sides of the mountains and over Fitzsimmons creek but the land on the slopes in between them is unsuitable for skiing, not to mention it is protected land. In order to build a gondola that would not go all the way to the ground they needed to take in to account the enormous costs. Intrawest, who owned both mountains at the time was able to receive the funding and the project was set in motion.

Whistler-Blackcomb broke ground in late May of 2007 after having to delay the project by a year. Most of the components of the system including the Gondola cabins themselves were made in Switzerland and then shipped over to Canada once completed. The Peak to Peak includes 4 towers, 2 of which were completed in the first summer of construction and the second 2 were added after the winter.In June of 2008 the 5 cables arrived in Whistler from Switzerland and had to be winched down Blackcomb Mountain to the valley floor then up Whistler Mountain. 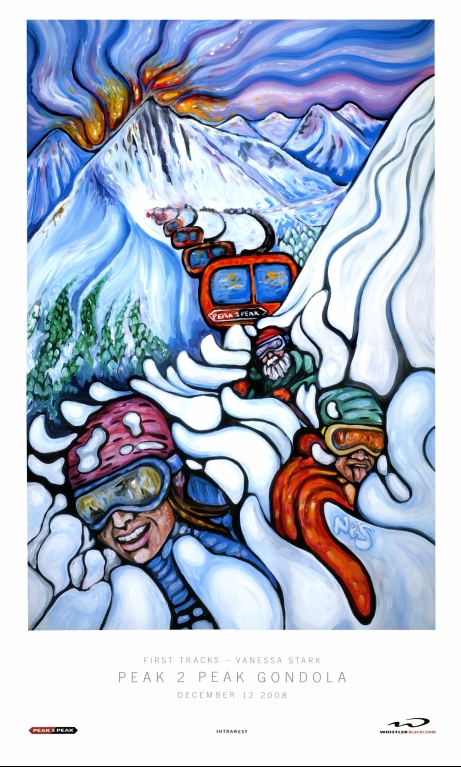 A total of 28 cabins were constructed and the first 12 crossed the span for the first time on September 19 of 2008. After successfully making it across the span the rest of the cabins were added and the whole system was tested rigorously till the grand opening that December.

The whole system was built by the Doppelmayr Garaventa Group and is the first tri-cable lift by Doppelmayr in North America. The only other gondolas like it in the world are ones in Switzerland, Austria, France and Germany but none of them can match the scale of the Peak to Peak.

The Peak to Peak holds 2 world records, one for longest free span between the towers, which is just over 3 kilometres (3.3 to be exact), and one for highest point above the ground, 436 metres.  It can hold over 4000 people in an hour and only takes 11 minutes to cross between the mountains. The total cost of building the gondola came to $51 million Canadian.

To celebrate the unveiling of the Peak to Peak, Red Bull Air Force Members base jumped from the middle of the gondola. Since then, in 2014 1 man carried out an illegal base jump from the tallest point of the Peak to Peak and cause some $10,000 worth of damage to the gondola car from prying open the doors. His accomplice was arrested shortly after and the act was condemned by many.

The Peak to Peak is a great attraction all year round to let athletes enjoy both mountains but also to allow sightseers to experience the beauty of the Valley and the hikes and views both mountains have to offer.