The past week has been a busy one here at the museum as we made our way through five consecutive days of events celebrating, what else, mountain biking in Whistler, during our second annual Whistler Mountain Bike Heritage Week.

The week started on Tuesday with “Transition: The History & Influence of Crankworx & Gravity Logic Inc.”  This Speaker Series event featured Tom “Pro” Prochazka of Gravity Logic and Nicole Freeman, project manager for Crankworx, talking about the origins of the two institutions in the Whistler Bike Park and how they both came to have international reputations and a global reach. 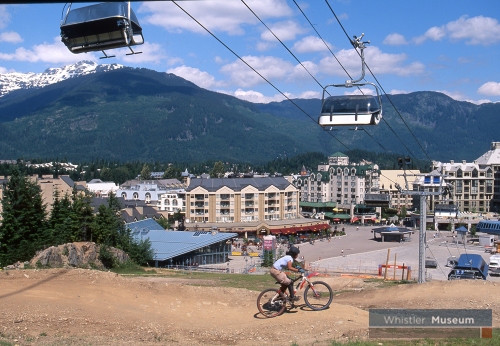 The Whistler Bike Park, shown here in 2000, has changed a lot in the almost two decades for which it’s been open.

Nicole Freeman, project manager for Crankworx, speaks to a crowd at the Whistler Museum.

The museum teamed up with Clint Trahan on Wednesday to offer a free photography class focused on capturing your own mountain biking photos and, so we’ve heard, Clint continued the discussion over drinks after class. 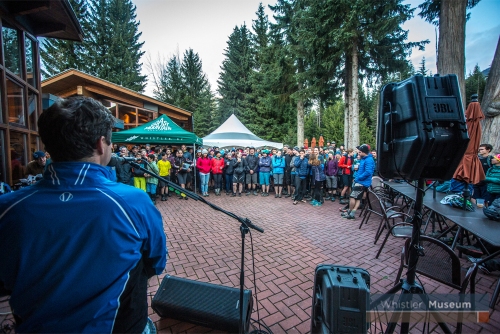 The bright pink was an easy choice for best retro gear outfit.

Thursday’s Retro Toonie Ride was a great time with over 250 riders.  Hosted with the Whistler Golf Club, Summit Sport, Whistler.com and the Whistler Bike Park, it didn’t feature quite as many vintage bikes as last year’s (not surprising given the course involved biking up and then down part of the bike park) but those riders that brought out their retro bikes and gear were all the more impressive for their commitment to the theme.

A classic Whistler jersey promoting The Cheakamus Challenge, a 70 km race between Squamish and Whistler, that first ran in 1989. 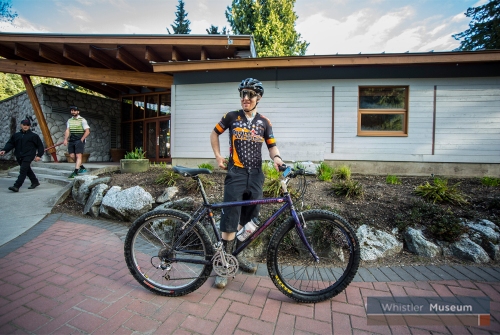 It’s not that often you see bikes like this one in the bike park these days.

Our winner for Best Overall retro ride & outfit.  It might have been the first time a bike with a milk crate has gone down Karate Monkey in the Whistler Bike Park.

On Friday the museum and the amazing team at Forlisë held a screening of The Collective, the 2004 film that continues to influence the ways mountain bike films are made today.  Jamie Houssian was on hand to discuss how and why The Collective was different than other films coming out at the time, as well as the challenges of using actual film (changing the film magazine every 2.5 minutes).

The screening of The Collective at Forlisë included a discussion of the film with filmmaker Jamie Houssian.

The Whistler Public Library, Bike Co. and the museum offered a free bike maintenance class on Saturday afternoon (which luckily was bright, sunny and dry) which quickly filled up early in the week.  Part of anything you do is taking care of and maintaining your own equipment and mountain biking is no different.

As part of Mountain Bike Heritage week we also installed some temporary exhibits in Whistler Village.

Thanks to everyone who supported the week, by partnering, sponsoring, speaking or attending!  We’re already looking forward to our third Whistler Mountain Bike Heritage Week next year.