Just as today many of Whistler’s hotels and lodges are centrally located in the Village, the lodges built in the 1920s through 1950s tended to be located on or close to the shores of Alta Lake.  One outlier was Jordan’s Lodge on the shores of Nita Lake. 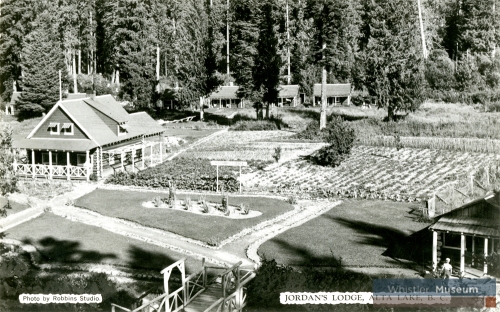 Russ Jordan first came to Alta Lake with his wife Laura and their two sons, Eugene and Stanley, in 1915 when he began working at a a logging mill at the south end of Green Lake.  The family then bought the Alta Lake Hotel on the southwest shore of Alta Lake.  After this purchase, the family’s story takes an unusual turn for its time: Laura divorced her husband and took their two sons to live with her in Vancouver.  Russ continued to operate the Alta Lake Hotel until it was destroyed in a fire in 1933.  He then went to sea as a barber on the ‘Empress of Japan’, an ocean-liner. 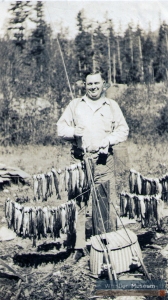 In 1936 Russ returned to Alta Lake and bought a quarter section of land (about 160 acres) from Harry Horstman.  For $2000, Russ’ property stretched from the south end of Nita Lake to the current location of the highway.  He hired Bill Bailiff to help construct his lodge on the lake.  Named Jordan’s Lodge, the property included the main lodge building, cabins, a barn for storing equipment, and a plot of land for Russ’ gardens, including a large vegetable crop and flower gardens.  Russ’ granddaughter Wilma Cates remembered “each cabin had its own rowboat so guests could go out on the lake… It was all water by pump and kerosene or gas lamps.”

For many years Russ’ sons spent the school year in Vancouver with their mother and their summers at Alta Lake with their father and his second wife Beatrice.  As a barber, Russ would give both boys their summer haircut when they first arrived in the spring.  According to Wilma, “he used to shave their heads and that did them for the summer.” 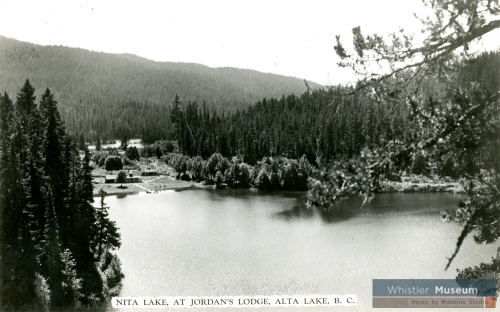 Although Stanley would later live mostly in Vancouver where he had a taxi business, Eugene spent some time living at Alta Lake.  When Eugene was about 19 he built himself a log cabin, reportedly where the Rimrock Cafe stands today, and made a living trapping furs in the Black Tusk meadows.  He later returned to live at Nita Lake with his wife Lorraine and their family for summers while working in forestry, following the train on a speeder and checking for fires.  As Lorraine recalled, “There were quite a few fires, you know, people would throw a cigarette out.  And the trains used to themselves, the brakes would give off sparks and start fires.”  Lorraine also remembered walking to Rainbow Lodge to pick up the mail and gathering with neighbours for dances, cards and socializing. 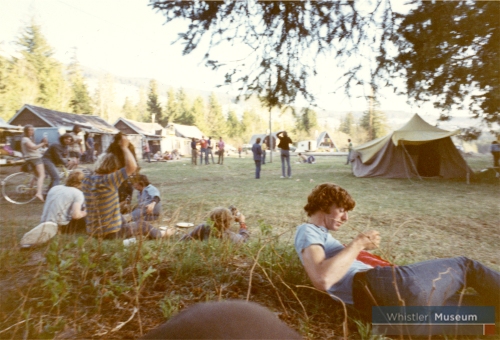 After the land was sold the cabins remained standing and were used for varying purposes. Photo: Benjamin Collection

With the beginning of the war Eugene and his family moved first to Vancouver, where he worked in the shipyards, and later to Squamish, where he opened some businesses of his own.  Russ Jordan and his third wife Maxine stayed at Nita Lake and eventually the land was sold to John Taylor in 1967.  Much of the Creekside we know today was built on Russ’ property.  The cabins of Jordan’s Lodge continued to stand on the shores of Nita Lake, though in increasingly dilapidated condition, until 2003 when they were torn down before the construction of Nita Lake Lodge.