This past September we were lucky enough to welcome Paul Burrows, founder of the Whistler Question in 1976, to the museum to talk about the early days of the paper.

The stories he told of The Question then are amazing, but while looking through our collection of oral histories we came across an interview Paul did with Whistler Cable nearly 20 years ago in which he described his early days in Whistler, back when it was still known as Alta Lake.

Paul first arrived in Canada in 1960 on a flight that hopped from London to Scotland to Iceland to Greenland to Newfoundland to Toronto.  He came west because “that was the place to be” and he and his friends started skiing.  It was thanks to some bumps and twists on the mountains that he first met and became friends with members of ski patrol in Vancouver.  They soon heard about a new ski area in Alta Lake and in 1965 Paul came up by train to take a look.

The second time he came up he was with a group in a Volkswagen and they brought their skis.  It was August.  As Paul recalled, “we put our skis on our back and walked up through the trees and we walked right up the west ridge of Whistler and we peered over the edge of Whistler Bowl and then we got to see them building the chairlifts on the Red Chair and cutting the ski runs.  So then we skied down and we got mixed up and ended up on a cliff and we got stuck there for a while.”  The group did eventually make it down the mountain. 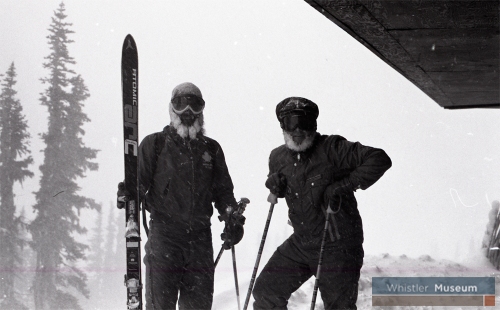 Bill Southcott and Paul Burrows sport snow beards after a few run on Whistler in the 1970s. Whistler Question Collection.

In 1966 Paul returned as a member of the brown-jacketed ski patrol for the season before leaving to work for the ski patrol in Aspen for a year.  When he returned he got a job working on the pro patrol alongside Murray Coates and Hugh Smythe.  In his words, “It was pretty hairy.  We got buried a lot.  The safety procedures we used to knock avalanches down and everything else would not be tolerated today.  We didn’t even talk about the WCB.”

During this time Paul, like quite a few other “residents” at the time, was squatting.  He rented a 15-foot trailer from a place in Richmond for the season for $550 and parked in a lot at the bottom of the mountain.  The trailer was put up on bricks, insulation was installed beneath it and plywood was put around it and the trailer became home to six or seven people.

Parking lot and gondola at Creekside base, ca. 1980, a decade after the trailer took up residence.. Whistler Mountain Collection.

With no electricity or water the wash facilities in the day lodge came in very useful, as did a trusty oil lamp.  According to Paul, “I would shut all the doors and windows and you’re in there but the trouble is you keep running out of air.  So when you had a party in there in the winter and there were guys in there you kept running out of air.  So if you had this little oil lamp cranked up, it was a bit like the miner’s lamp, when the light started to flicker and go out you knew you had to open the door and let some more air in.”  Condensation was also an issue in the trailer.  Condensation build up could freeze the doors and windows shut and the lamp would then be used to melt one’s way out of the trailer in the morning.

After that season Paul again left Whistler, this time for Grouse and then work in the printing business.

The Burrows’ A-frame on Matterhorn, where the first editions of the Whistler Question were created.

In 1971 Paul married Jane and when she was offered a job teaching in Pemberton the pair moved back to Whistler, staying in their Alpine A-frame until 2000.

One response to “Paul Burrows’ Early Years in Whistler”