The Early Days of Creekside

The community of Alta Lake, which attracted visitors and families with cabins in the summer for hiking, hunting and fishing along the lakefront, was forever changed in 1960.

That year, the Garibaldi Olympic Development Agency, led by Franz Wilhelmsen, chose the valley as the site to bring the 1968 Winter Olympics to Canada and British Columbia.  The failure of this first Olympic bid, while discouraging, did not dissuade the group from deciding to build a world-class ski resort.

The Garibladi Lift Company installed the first gondola-accessed ski area in North America and opened the ski resort in January 1966.

With the lack of an official community plan or recognized local government, development went unchecked.  Ski cabins were scattered around the base along with a gas station/grocery store and a telephone exchange.  The Garibaldi Lift Company built an interdenominational skier’s chapel, complete with bells and a memorial stain glass window.

The Cheakamus Inn, the Highland Lodge, Rainbow Lodge and other Alta Lake lodges housed visitors in what had normally been the off-season for the Alta Lake community.  A large development was planned near the shores of Nita and Alpha Lakes.  The development would have included residential and commercial properties as well as more recreational areas such as a curling/skating rink, swimming pool and tennis courts.  A condominium development called Alpine Village sat above the gondola area on the slopes of Whistler Mountain.  The UBC Varsity Outdoor Club began constructing their new club cabin near the gondola base.

Alpine 68 newly constructed in 1968. Condos such as these sprung up around Creekside and Nordic.  Photo: Whistler Mountain Collection

The parking lots at the base of the gondola were consistently full.  Highway 99 was finally blacktopped between Squamish and Whistler, but the drive was still full of hairpin turns and single lane bridges.  This didn’t stop skiers from driving up from the city. 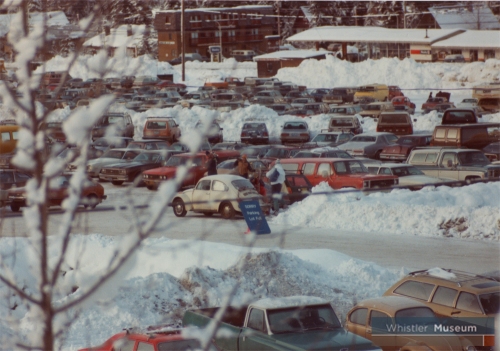 The popularity of the ski resort also attracted another group of people to the valley: “hippies” and those involved in the counterculture movement.  Those unable to afford to purchase land or build their own ski cabin would squat on Crown land.

With the RMOW established on September 6, 1975 the chaotic nature of development in Whistler’s early years was over the focus on bringing about the well-planned Whistler Village began.

5 responses to “The Early Days of Creekside”