If you’ve been at Family Après in Olympic Plaza over the past couple months, you might have recognized a tent from the Discover Nature summer program at Lost Lake.  In July and August the Discover Nature team shared its knowledge of Whistler’s natural history through touch tables, activities and nature walks around Lost Lake.

Discover Nature at Family Après focuses on some of the animals that are active in Whistler during the winter.  The challenge is to identify eight mammals in Whistler that neither migrate nor hibernate using replicas of their skulls, tracks and claws.  This may not sound like a whole lot to go on but the teeth can give you clues about what an animal eats and the shape of the skull can indicate traits such as a keen sense of smell or better than average night vision.  Hints and help are also on hand if you get stuck.

The touch table at Discover Nature in the summer. Some of the same skulls, pelts and tracks are on display this Monday in Olympic Plaza.

While hiking, biking and even skiing around Whistler I have encountered over half of the animals featured at the Discover Nature tent, but one that I have never seen is the wolverine.  After learning about an encounter John Millar once had with a wolverine, I’m not so sure I want to.

Wolverines are the largest members of the weasel family, which also includes martens, mink and river otters.  Sometimes described as a mixture of a dog, a bear and a skunk, wolverines have short legs, long hair and distinctive markings, including a dark mask around their eyes and a light stripe on each side running from their shoulders to the base of their tails.  Although wolverines are typically about the size of a medium-sized dog they are effective predators and can even smell prey hibernating beneath six metres of snow.  Their diet can range from berries, rodents and ground squirrels to mountain goats and moose. 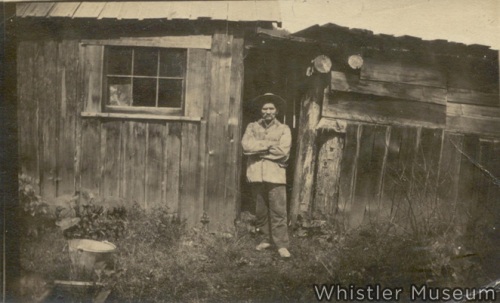 John Millar outside his cabin (today the area of Function Junction). Millar Creek was named for this early settler. Photo: Philip Collection.

Millar is perhaps best known as the trapper who introduced Myrtle and Alex Philip to Alta Lake.  A Polish immigrant, Millar arrived in the valley sometime before 1906 by way of Texas, where he worked as a cook at a cow-camp.  He purchased some land along the Pemberton Trail near the junction of Millar Creek and the Cheakamus River (today the area of Function Junction) and built a roadhouse for travellers, supplementing his income from trapping by charging 50 cents for a bed (meal not included).

From the account of Dick Fairhurst, Millar may not have always been the most successful trapper.  He regularly caught marten, rabbit, mink, muskrat (the basis for a memorable stew), and beaver.  Once, however, while out on his trap line Millar caught a wolverine.  Thinking it was dead he added it to his pack and walked on.  Unfortunately for him, the wolverine was still very much alive and came to while still on his back.  It ate a hole through Millar’s pack and “grabbed John by the seat of the pants.”  While Millar managed to extricate himself from the angry wolverine it was awhile before he could sit comfortably again.

Discover Nature will be back at Family Après in Olympic Plaza this Monday, March 5.  If you think you can tell a wolverine from a bobcat, come by and say hello.