For most of the year floatplanes overhead are a common sight (and sound) above Whistler.  Today, these planes land and take off from Green Lake – an everyday occurrence.  But in the 1920s floatplanes were an adventurous way to arrive at Alta Lake.

The first record of a floatplane landing on Alta Lake was on August 31, 1922.  While floatplanes were not a common mode of transport, a fair number did arrive and take off from the lake. 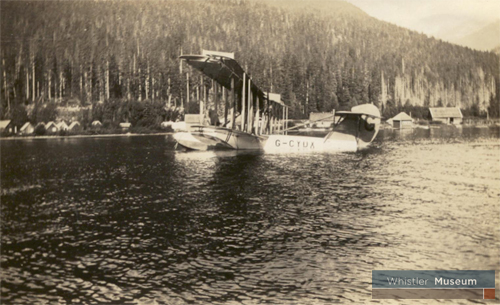 The first plane to land on Alta Lake, flown by Earl Leslie MacLeod.

In 2011, Betty Jane (BJ) Warner (nee Matheson) shared her memory of a floatplane landing on Alta Lake in the late 1920s.  She was only four or five years old at the time.

The Matheson children and their mother spent the summers of 1927 to 1934 at a cabin on the south end of Alta Lake.  Betty Jane’s father Robert Matheson stayed in Vancouver to work but sent up letters and supplies, most notably marshmallows.  The cabin was rented from William “Mac” MacDermott and Mac became a close friend to the family.  In the summers he chopped their firewood, checked the oil in the lamps, did general repairs when needed and went hiking with the Matheson siblings Jack, Claudia and Betty Jane; in winter he would spend Christmas Day with the Matheson family in Vancouver.

One day, Mac had taken Jack hiking, Claudia was reading in the shade and Betty Jane was paddling by the shore of Alta Lake with the young maid who came to keep an eye on her.  What happened next is best said in Betty Jane’s own words.

Suddenly, a loud thunderous sound and something deafening roared across the sky.  It reached the far end of the lake, seemed suspended, turned, then menacingly approached us, skimming the water like a giant torpedo.  It came lower and lower and as it became closer caused all about us to vibrate and rumble.

I was terrified and along with Evelyn (the maid) and the dog we fled into the cabin, followed by my mother, who, fearful of an overhead crash, ordered us to protect ourselves under a huge canvas that covered our woodpile.

It was my father, of course, and his pilot friend who chose that day to surprise his young family on what was, proudly for him, his first flight… What a let-down it must have been for him to be met by the dismal sigh of his terrified children huddled under a tarp and an upset wife, tearful and near fainting, scolding him for traveling in such a dangerous contraption.  My brother missed it all.

This was the first time Betty Jane had ever seen an airplane, a memory that remained with her for over eight decades.  As she recalled, “The Space Age was upon us, but to this young person the marvel of it all was the gigantic tin of Moonlight Marshmallows that came with it.”