This Week In Photos: June 7

Myrtle Philip, the valley’s long-time resident, met Dana Parker-McLain, one of the valley’s newest, at the Community Club’s Potluck dinner.

Logging truck and cargo lies strewn along the highway after sliding over 150 yards around a corner only 1/2 mile south of the Gondola area. 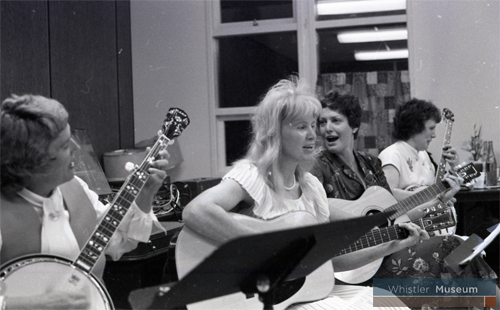 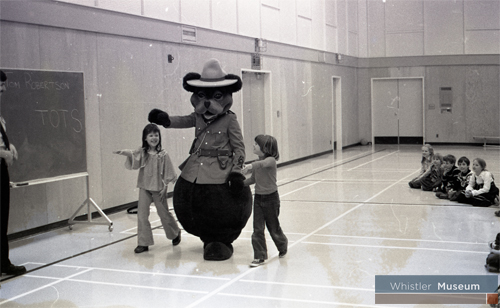 Heather Muir and Morag Marshall with ‘Safety Bear’ Hansen at the school.

Hello! Macauley Nicolls Maitland manager Debbie Teigen smiles as she finally gets her office phone after 5 months of waiting. 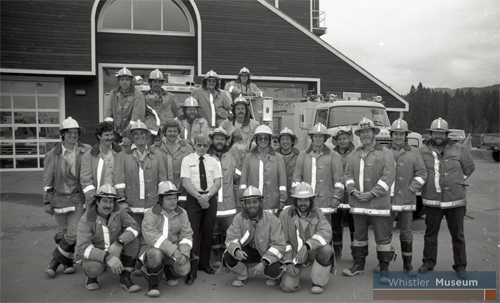 New Fire Chief Wayne Schepull stands with the Whistler Volunteer Fire Department at their first meeting together on June 4.

Looking down on the Village Square and some of the 70 motorcycles that were parked there on Sunday. 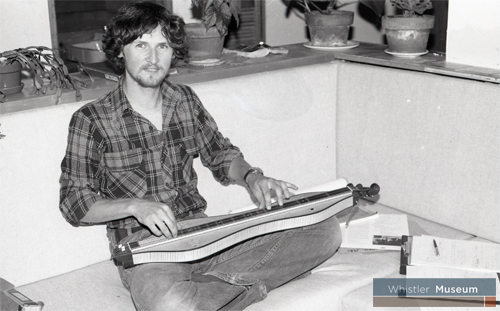 Craig Tomlinson playing one of his hand-crafted dulcimers.

This is the first motorist to miss the approach curve to the Culliton Creek Bailey bridge. The accident occurred on June 6.

A semi-permanent abode graces the shores of Green Lake in a makeshift campground on private property. Bottles, remnants of campfires and dirty pans litter the ground in this otherwise beautiful setting. 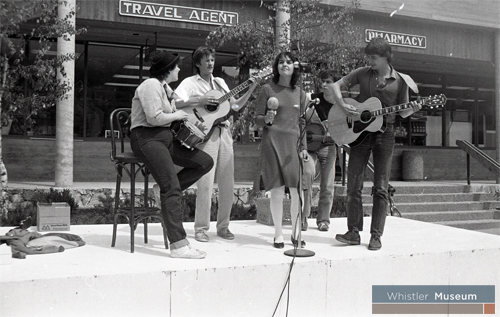 Pause awhile in Whistler Village the next sunny day and you’ll hear this group of young musicians perform a wide variety of selections. (L-R) Jennifer Porter, Cal McConnell, Connie Carver, Dan Cushing, and Frank Mallany are a part of a federal government student employment program run by the WRA. In addition to displaying their musical talents these young people will be offering village tours, working at the new information booth and helping at special events.

Ray Lyman, band director of Seaton Secondary School from Vernon, was pleased to present Whistler’s Molly Boyd with a band booster award for the services she rendered in bringing the group to Whistler. Band members and audiences alike braved cold winds to share a top-rated concert of big band sounds. 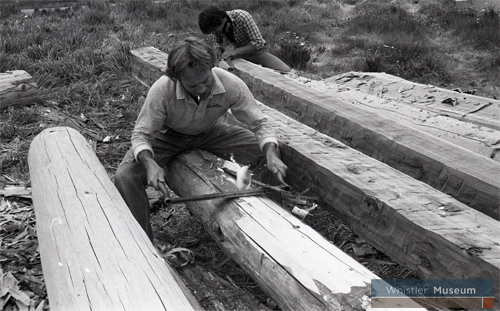 Chips fly where they may as Jud Forster (left) and Stan Hammond prepare red cedar logs for a carport in Whistler Cay Heights being built by Hammond and Davies Log Builders. 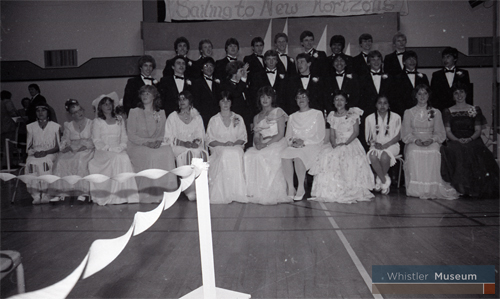 Thirty-one students graduated from Pemberton Secondary Friday night, including Scott Logue of Whistler who received the Governor General’s Bronze Medal for academics from school Superintendent Trevor Harris. More than 500 people attended the commencement ceremonies at the Pemberton school, making it the second largest annual event in the town next to the Christmas concert at Signal Hill Elementary. Logue, also class valedictorian, was among three local students who received awards. Rob O’Keefe was awarded the Whistler Mountain Ski Corporation bursary, and the Alta Lake Community Club picked Rob Boyd as this year’s recipient of its bursary.

Whistler’s branch of the North Shore Community Credit Union opened on Friday, just two months after it was approved. By 11 am Friday a line-up was formed, and on Saturday the credit union had 150 new members. Credit union President Susan Burdak (left) spoke to the crowd at Saturday’s official opening.

Cecile Valleau is Whistler’s newest postmistress. She was promoted to the position May 22, taking over from Debbie Cliffe, who was transferred to the Agassiz post office. Valleau has worked at the Whistler post office since 1979 and is a 15-year valley resident.

Skiing may be over for the year, but work on Whistler Mountain still continues. At the end of each season all the chairs, including those on Olive Chair, are taken off the cables, checked and then moved to a different spot to prevent metal stress. As well, the metal clamps holding the chair to the cable periodically undergo magnetic tests for cracks.

The venerable Myrtle Philip drew the winning ticket Thursday in a draw for a Molson World Downhill poster signed by the Canadian downhill team. Assisted by Glen Rustad (right), Whistler’s grandmother chose Bill Carson’s ticket. Proceeds from the draw went to the Whistler Singers, which performed Thursday at the elementary school accompanied by the students. The show, which ended in a standing ovation for orchestrator Molly Boyd, featured musical performances by kids on recorder, guitar and ukulele.

One response to “This Week In Photos: June 7”