This Week In Photos: August 9

The ski jump emerges from the forest onto Lost Lake.

Okanagan Helicopters help with the construction of the Little Red Chair on Whistler Mountain.

The parade travels through Squamish during the Squamish Days Loggers Sports Festival. 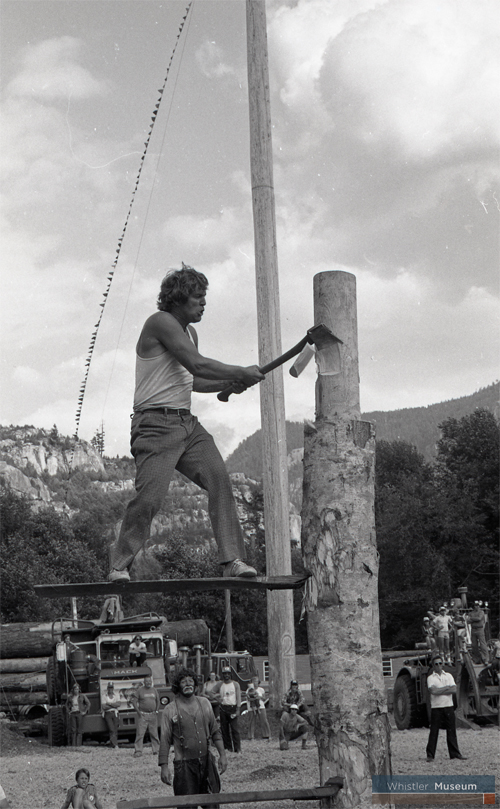 Ian Moratti gets stuck into the log in the open chop.

Mike Carney (left) and his father Owen on the birling log.

The cabin built on the shores of Daisy Lake for the movie set of Strange Companions.

The 13-unit, concrete finish condominium block to be built by MacArthur for Riverina Developments at #8 Bayshores.

The Bow Helicopter Aloutte Machine after the crash.

Pemberton Information Booth, in front of the Pemberton District Library. 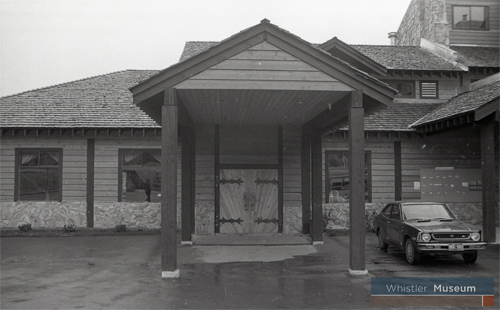 The doors of the former Filling Station Restaurant will open again – under a new name and management. No one is saying just what the new restaurant will be like at its location next to the Whistler Creek Lodge.

Summer skiers hike up to ski down the Horstman Glacier. 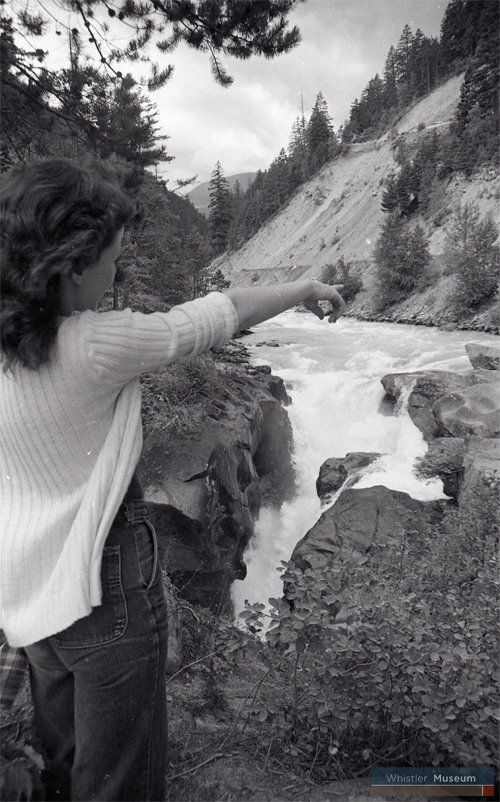 A visitor to the Whistler/Pemberton area points out a feature of Nairn Falls, a scenic attraction only minutes from either town that many visitors miss.

Lost Lake south shore from two angles (see photo below) showing where a beach and picnic ground will be.

Swimming lessons are much more fun when you’re with a friend – and a competent instructor like this one. Lessons are on now at the Whistler Creek Lodge.

Some of the lakes on the golf course. Tees are constructed and greens are being worked on now.

Mr. Sandman, bring me a dream… sunbathers enjoy some of the upgrading at the old Rotary Wharf access to Alta Lake. The Municipality has brought in tons of sand and moved the Rotary wharves to the beach at Lakeside Way.

Excitement abounds at the ‘boat races’ at L’Apres Beach Party on August 6. 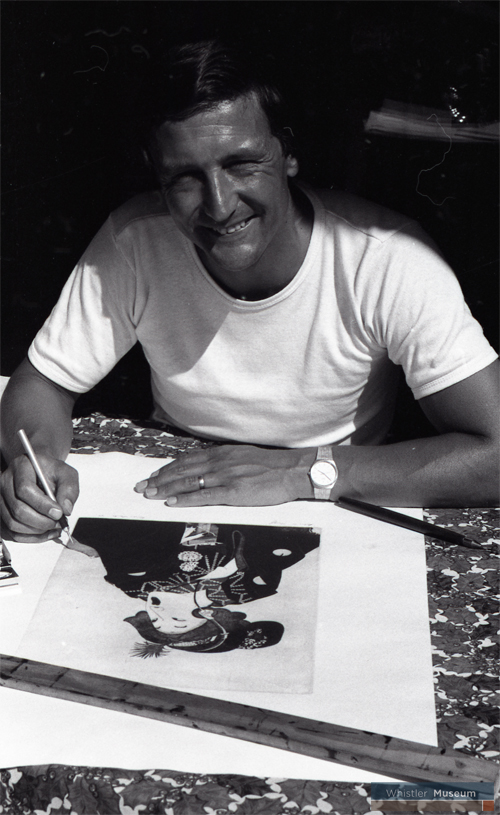 Geisha with a Sony – one of Roger Hale’s satirical comments on new tech society. 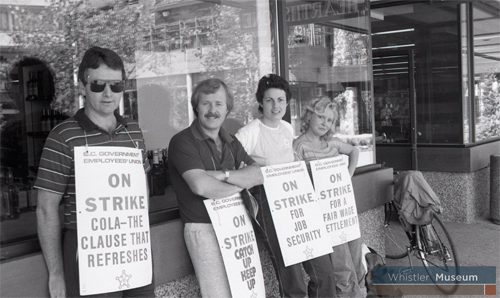 Although it only lasted three days, the BCGEU strike at the local liquor store was viewed by some imbibers as near-fatal. But liquor store staff (l to r) Rod Harris, Ian Frew, Diane De Gusserne and Allyson Edwards still maintained they had a clause that refreshes.

Steel tower pipes for Blackcomb Mountain’s new lift No. 6 lie waiting for attention in Parking Lot C. Construction is right on schedule for the $1.6 million project to be completed by November.

Swimmers set off on a mile-long swim during the Molson’s Fun Swim, which started from Wayside Park on Sunday.

Paul Clarke and Karen Edwards assemble the first of the emerald green and white signs in the municipality’s new signage program. 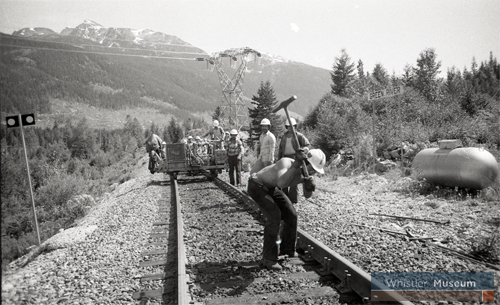 Not quite the last spike but David Lane of Vancouver gives it all he’s got as BCR crews work on gauging the tracks at the Green River crossing 10km north of Whistler.

One of the competitors vies for position in the triangular race. 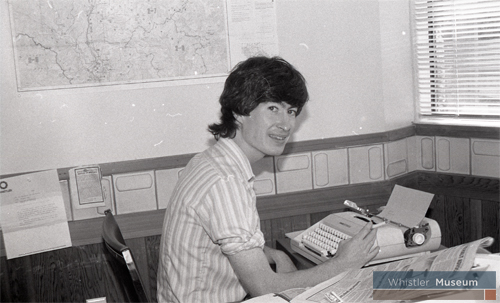 Kevin C. Griffin, newest staff member at The Question, limbers up his fingers for the flurry of reporting that awaits him. Griffin, a native of Vancouver, is a recent graduate of Langara’s accelerated journalism program and has a B.A. in political science from UBC.

Reporters attending Monday’s press conference announcing $138 million to improve Highway 99 seized upon the opportunity to poll the reaction of Mayor Mark Angus. Whistler’s mayor later commented that although he doesn’t like to bite the hand that feeds him, he does feel that highways dept. has taken too long with past construction projects, interfering with tourist traffic to the area. 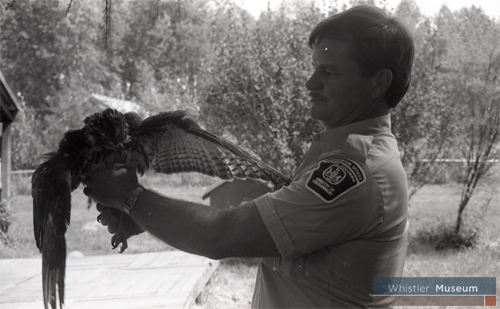 Bob Lawrence, Pemberton conservation officer, holds an injured young goshawk he recently rescued. The goshawk is considered uncommon to rare in North America, and is also found in Africa, Madagascar and parts of the southwest Pacific. Adults reach a size of up to 63 cm in length.

Two separate water main projects last Wednesday caused the water to most of the village, Alta Vista and Brio to shut off from 9 am to 3 pm. Workmen from Coastal Mountain Excavations installed a water main connector to service the soon-to-be-built waterslide while a crew from Kal Sprinklers laid a water main extension to the new Municipal Hall and Village North Lands. According to engineer Doug Wylie, the lack of water resulted from a combination of the two projects and Kal Sprinklers failing to open a valve. Usually, says Wylie, there are enough loops in the water system so that if one section of the water main is turned off, water can loop through other pipes to the affected areas.

Schultz Brandt, a familiar figure around town, held his seventh annual tea party Sunday. It’s not just an ordinary tea party, though Schultz’s tea collection contains 200 varieties including 82 black teas from all over the world. In addition to his marvellous collection of teas, Schultz has a smaller but equally comprehensive assortment of teapots.

Members of the Whistler Mountain Ski Club took a swing into Lost Lake during the balmy weather last Saturday. Although it seemed we had a lot of sun last month, CBC radio weatherman John Paschal says it’s quite normal for this time of year.