This Week In Photos: November 15

This week of 1984 includes some photos from Beer League Slo-pitch Banquet.  For more photos of the trophies mentioned, take a look here – some of them are quite interestingly crafted.

The copper pillars of the pub in Package 6 reflect the afternoon sun at Whistler Village.

Three views of the Ski Swap… The crowds of cars outside..

… the crowds of people looking for bargains inside…

… and the RCMP engraving skis as part of their “Ski Watch” program. 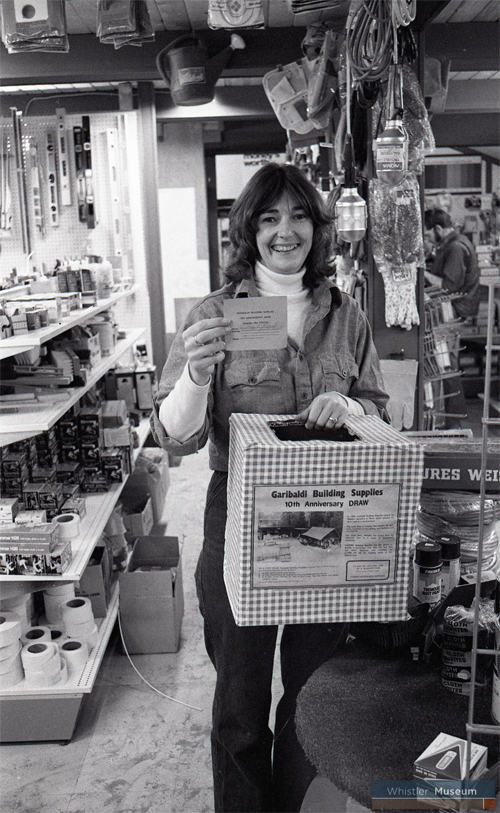 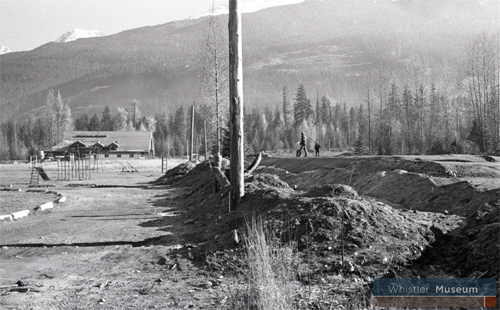 The new town access road that runs past the school property. The new road is about 1.5 metres above the level of the school grounds.

View of the Rotary Auction as seen from the front of the room. Nandor Pal has just made a bid! 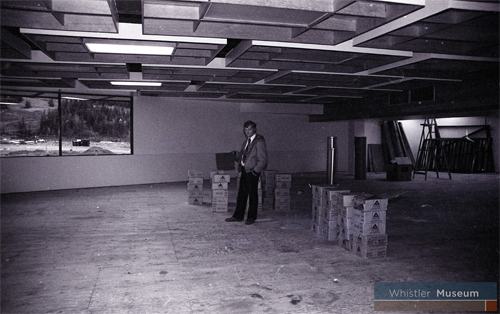 Gourmet’s Ted Nebbeling heads out with a tray of goodies for the Blackcomb Sports store opening. 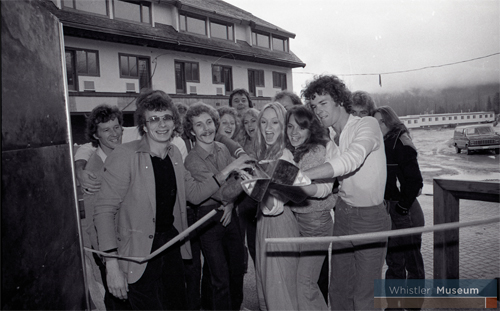 A happy Blackcombe Sports staff cuts through the ribbon with a pair of skis as scissors at the store opening ceremonies. 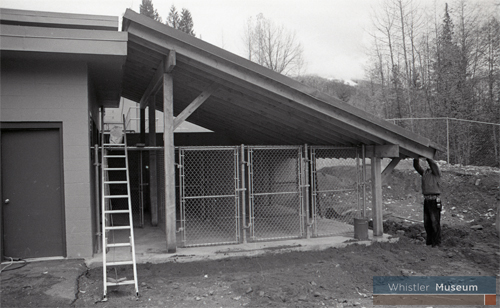 Oh happy days – frosted slopes and free season’s passes from each mountain. Roland Kentel (left), president of Whistler Athletic Society, was pleased to present Rod MacLeod with a pass to Whistler and Cheryl Devine with one to Blackcomb for their top efforts in raising money for the Terry Fox Marathon of Hope; Rod raised $1,260 and Cheryl raised $1,134. 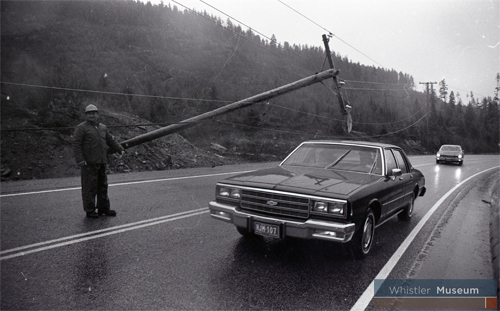 Oops – didn’t think that telephone pole looked like that last night. This one took a nose-dive in the early morning hours of Saturday, November 14, knocking out power in the southern part of the municipality for several hours. BC Hydro said that the rain-soaked earth was at the root of the problem.

Al Raine displays his broadjumping skills for sons Charlie and Willie, an unidentified family friend and the family dog. 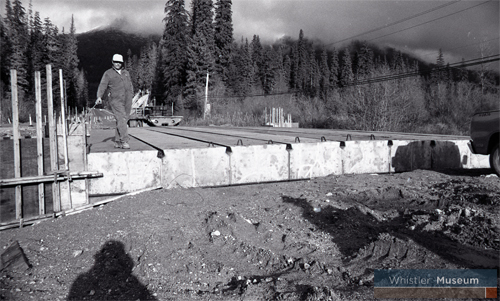 Department of Highways worker stands on one of the 44,000 lb. concrete beams that will make up the base of the Bridge at River of Golden Dreams.

Treasurer Gary Raymond plays at the keyboard of the municipality’s new $60,000 Basic MAI system 210 computer. The system is capable of printing 150 lines per minute and storing up to 14 million characters. Tax accountant Kathy Hicks and MAI system analyst Gene Wong look on.

A quiet moment in memory of the war dead is observed Thursday, November 11 by members of Whistler RCMP and Whistler Ambulance. (L – R) Denver Snider, Gord Simms, Andrea Lloyd and Jim Scribner observe two minutes of silence after laying a wreath. Any war vets who would be interested in holding an Armistice Day service next year are asked to contact Jim Scribner.

Margate Kogler ‘hams it up’ with a submarine sandwich in the kitchen at the Community Club Fall Fair November 13.

Eugene Rickli displays a selection of his hand-carved cedar faces at the Community Club Fall Fair.

First snowman of the season was being created on November 15 with only the help of a small shovel and a metal spoon. Sculptors are (clockwise from the bottom left): Sam Davies, Pam Pocius, Tim Sereda, Anthony Garm and Nina Lewis.

Ian Boyd, an employee of Whistler Mountain Ski Corp., demonstrates the ins and outs of this SMI snow-making machine Thursday. The machine, which may be put to use on Whistler Mountain this winter, is able to produce enough snow to cover one acre one-half inch deep in one hour.

Smith Brothers Wilson employees poured part of the concrete slab for the Conference Centre’s second floor Friday. Construction crews are racing against the clock to get the second floor and roof completed before the end of the month. The 2,100 person capacity Conference Centre is scheduled to open June 1.

About 75 people attended a brief Remembrance Day ceremony in front of the Tri-Services Building Sunday morning. At precisely 11 am a minute of silence was observed to commemorate those Canadian men and women who died in battle and to give thanks for the peace they fought and died for.

About 1,300 people passed through Myrtle Philip School gym and lunchroom Saturday for the 8th annual Fall Fair organized by Heather Gamache and Catherine Wiens from the Alta Lake Community Club. Although final figures haven’t yet been tabulated, Gamache estimates the club raised close to $1,800 from the fair that featured clothing, jewellery, photography and art and other hand-made crafts.

Sonya McCarthy with a selection of South American clothing she was selling at Saturday’s Fall Fair. 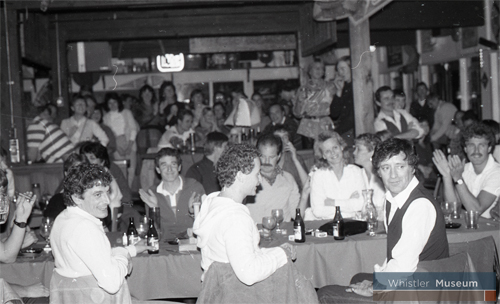 150 people showed up for the last week’s beer league’s slo-pitch banquet, despite weather conditions that were definitely not for baseball. Each team in the league made a trophy for presentation to one of the other teams. Trophies included a No Name brand trophy, a softball/sailboat, and a Muppet-like doll with one rather unMuppet-like feature. 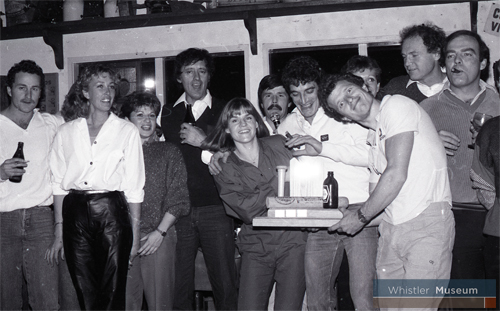 Stoney’s accepts its team trophy. The team won the league championship this year.