Summers Gone By: The Dave Murray Ski Camps on Film

In my last post, I shared the story of Marine World/Africa U.S.A., a California zoo and theme park with an unexpected connection to the museum.  This week, I’ll be talking about a topic that is much more quintessentially “Whistler”: the Dave Murray Summer Ski Camp.

Those who attended the camps on Whistler Mountain in the 1980s may have fond memories of summer skiing under the leadership of former Crazy Canuck Dave Murray.  Though the first summer ski camp on Whistler Mountain ran in 1966, the roots of this action-packed camp date back to 1967, when it was helmed by Austrian ski legend Toni Sailer.  Murray attended as a teenager and took over as head instructor in 1984.  The camp’s new name endured past Murray’s tragic death from skin cancer in 1990, before being simplified to The Camp in 2013.

Over the past several months, I have been working with a large collection of materials related to the Toni Sailer and Dave Murray Summer Ski Camps.  These included a veritable treasure trove of 43 videocassettes and DVDs containing footage from these bygone summers.  Most of these tapes were annual highlight videos set to catchy tunes of the ’80s and ’90s.  Predictably, skiing took centre stage, showcasing everything from the wedge turns of beginners to the graceful freestyle of coaches like Stephanie Sloan.  One oft-repeated stunt saw campers zoom down a hill and through a large slush puddle waiting at the bottom.  Needless to say, this resulted in many painful-looking wipeouts.

The Summer Ski Camps aren’t the only ones to ski through slush – the spring Slush Cup is still going today. Greg Griffith Collection.

The videos also featured many outdoor activities that put the “summer” in Summer Ski Camp.  Once off the ski hill, campers enjoyed biking, swimming, windsurfing, watersliding, canoeing, roller-skating, and more.  Volleyball, tennis and golf seemed to be the most popular sports.  More unusual pastimes also made appearances – including a flying trapeze, an Aerotrim machine and a large, suspended basket carrying passengers over a river.

As per the carefree spirit of Whistler, cheeky and even rude humour abounded in these tapes.  Peppered throughout the videos were scenes of campers making faces, telling jokes and generally clowning around.  The ski camp staff performed and filmed skits such as “Dave Murray Land,” “Timmy’s Dream,” and “The Lighter Side of Coaching.”  They were even kind enough to include blooper reels.  More than one person mooned the camera. 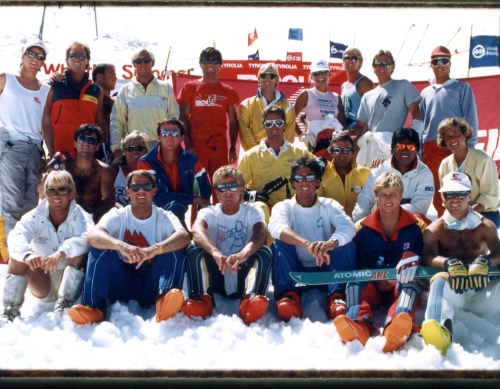 A group shot of all the coaches at the Dave Murray Summer Ski Camp, circa late 1980s. The crew was a veritable “who’s who” of Canadian ski racing.

On the other hand, there were also several professionally-edited televised advertisements for the camp, such as a BCTV promo from 1984 and a Pontiac World of Skiing special aired in 1995.

As I watched hour after hour of footage, I was struck with a sense of double nostalgia.  Firstly, for the fun-loving campers whose childhood memories I was vicariously experiencing – and who must now be at least in their 30s.  Secondly, for myself.  Here I was, handling VHS for the first time in a decade and reminiscing about the summer camps outside my own hometown of Edmonton (although I must admit that the skiing scene on the Alberta prairies can’t compare to that offered at the Dave Murray Summer Ski Camps!).

Holly Peterson is the archival assistant at the Whistler Museum and Archives.  She is here on a Young Canada Works contract after completing the Museum Management and Curatorship program at Fleming College (Peterborough, Ontario).

One response to “Summers Gone By: The Dave Murray Ski Camps on Film”