Discovering More About the Chefs of Rainbow Lodge

As the museum’s collection grows, so too does our understanding of the people who made Whistler’s early resort days possible.  Some names, such as Myrtle and Alex Philip, are already well known while others are far more obscure.  In this article, I’m going to shine a light on two lesser-known but very important figures from Alta Lake: Rainbow Lodge’s two cooks Lam Shu and Wing Sam. 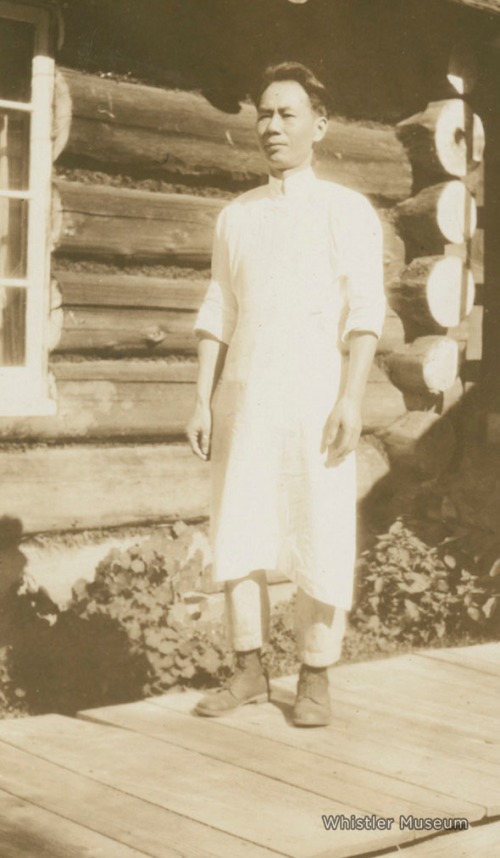 Lam Shu was born in China around 1896 and immigrated to Canada in 1908 aged about 12.  It is unknown whom, if anyone, he was travelling with.  While living in Vancouver, he was hired by Alex Philip to work at the Horseshoe Grill.  Alex was running this restaurant to raise money for the newly established Rainbow Lodge, which Myrtle was operating on Alta Lake.  By 1916, Rainbow Lodge had become so successful that Alex sold the grill and moved up to Alta Lake full-time.  Lam Shu, now a young man of about 20, accompanied him to become the lodge’s chef.

Although little is known about Lam Shu himself, historical accounts give us a glimpse of a hardworking, talented and well-liked man.  His cooking skills were among the many draws of Rainbow Lodge, giving guests from across the country yet another reason to look forward to their visits. 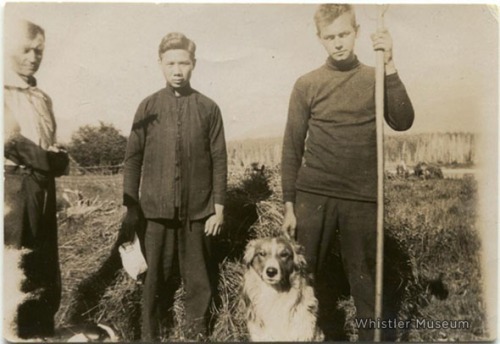 Rainbow Lodge staff with Skookum the dog, approximately 1919. The man in the middle of the photograph is presumed to be Lam Shu. Philip Collection.

One of his signature dishes was divinity pie, filled with fresh peaches and topped with custard meringue.  In fact, the recipe was so sought-after that Lam Shu offered to teach it to Myrtle if she was interested.  He would also pack the ingredients for popular trail breakfasts, taken by guests on horse rides and prepared out in the bush.

Lam Shu wasn’t the only member of the Rainbow Lodge culinary team – the 1921 census reveals a fellow cook, Wing Sam, living with him as a “lodger.”  According to oral histories given by Whistler pioneers Vern Lundstrum and Vera Barnfield, he may have been Lam Shu’s brother, although this has not been confirmed.  Wing Sam was born in China around 1900 and moved to Canada in 1911.

The census gives some tidbits of info on the men’s personal lives – both were Confucian and could read and write.

At some point before 1932, Lam Shu visited his family in China.  Upon his return to Canada he unfortunately caught a chronic case of influenza.  For the sake of his health and to spend more time with his loved ones, he decided to return permanently to his birth country.  The museum has recently been given a letter, dated December 15, 1932, from Lam Shu to fellow Rainbow Lodge staff members George and Pearl Thompson.

In it, he states: “I am very sorry to say that I leave for China owing to my sickness.  I miss the Rainbow Lodge very much.  Hoping you are well and Kathleen (the Thompsons’ daughter) too.  Wishing everybody to have Merry Christmas and Happy New Year, so good bye to you all.  Sincerely, your friend, Lam Shu.”

After Lam Shu’s departure, Wing Sam took over as Rainbow Lodge’s head chef.  He remained in this position until the lodge was sold in 1948. 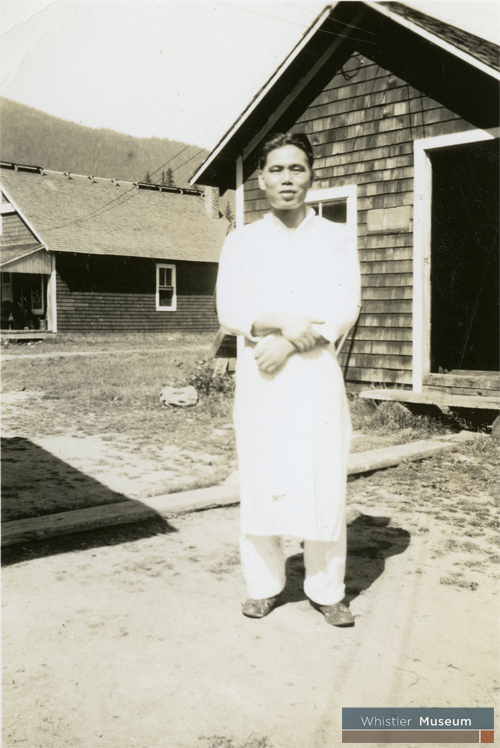 Wing Sam remained the chef at Rainbow Lodge until it was sold by the Philips in 1948. Philip Collection.

After this, Lam Shu and Wing Sam seem to have disappeared into history.  It is unfortunate that more is not known about these two men and their contributions to Whistler’s not-too-distant past.  If you know of any information on Rainbow Lodge’s chefs, the museum would be more than happy to hear from you!

Holly Peterson worked as the archival assistant at the Whistler Museum and Archives.  She was here on a Young Canada Works contract after completing the Museum Management and Curatorship program at Fleming College (Peterborough, Ont.).  She is now moving on to a new contract at another museum and we wish her all the best!