Trick or Treating at Tapley’s

Thank you to everyone who participated in the Legends of Whistler… tell the stories last week!

Quite a few of the stories took us back to a time when Whistler was much smaller, and had us thinking about how Whistler has grown over the last few decades.  This growth can be seen in almost every aspect of the community, including the celebration of Halloween.

Jane Burrows and her class show off their Halloween costumes. Whistler Question Collection, 1980.

Tapley’s Farm has been a popular place to spend Halloween since the 1980s.  What had begun as an idea in a real estate office in 1979 had (with a lot of hard work) become a neighbourhood by the mid-1980s.

According to Francois Lepine, this neighbourhood was different from other subdivisions in Whistler in that, “It was the only subdivision that looked exactly the same on a Saturday night or a Wednesday night.”

Tapley’s was lived in by full-time residents, while other subdivisions had a mix of residents and second-home owners.  This made Tapley’s Farm an ideal area for trick or treating.

Like most traditions in Whistler, Halloween in Tapley’s began as an unofficial neighbourhood event.  In 1985, the decision was made to close the streets to cars during the evening so that kids could trick or treat without worry.  This was so successful that the neighbours continued putting up roadblocks and families from other subdivisions came and joined in the fun.

Houses received more than 100 trick or treaters in 1986, and Lee Bennett, a Tapley’s resident who organized the event in 1987, expected about 125 as the populations of the valley grew.  By this time, donations of candy were sought from those bringing their kids to the neighbourhood to lessen the cost for residents of Tapley’s.

Donated candy is sorted and then distributed throughout Tapley’s Farm. Whistler Question Collection, 1994.

Bennett attributed the popularity of Tapley’s to both the proportion of occupied houses and the layout of the houses.  As she told The Whistler Question, “They also don’t have to climb 100 stairs like in some other subdivisions.  It’s easy for the children to get around.”

By the mid-1990s, more than 600 kids were trick or treating in Tapley’s Farm annually and it had become known as Whistler’s “designated haunted neighbourhood.” 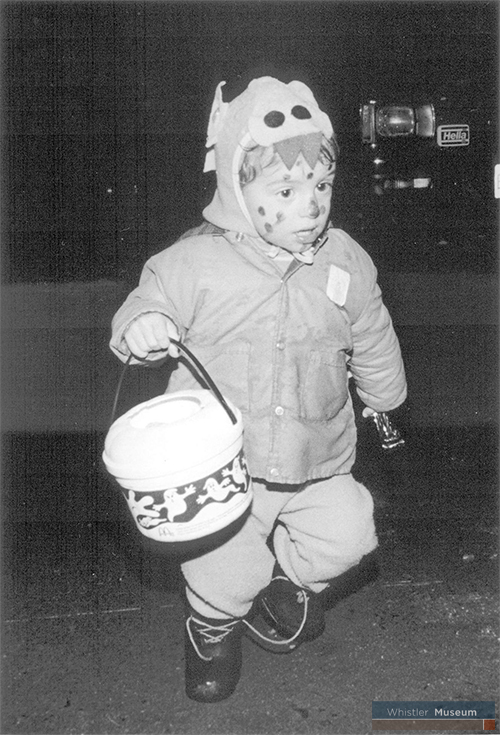 Residents took an active part, decorating their houses and handing out treats in costume.  A competition had even been introduced for the best decorated house.  Donations of candy for the event could be dropped off at Myrtle Philip School, the Whistler Children’s Centre, or at the house of one of the organizers.

A fireworks display in the lower field, presented by Whistler firefighters and Nesters Market, was the grand finale of the evening.  According to Keith Mellor, one of the firefighters who volunteered for the show, more than 1,000 people were expected to attend the fireworks in 1998, as Halloween fell on a Saturday and Tapley’s was expected to attract Vancouver visitors as well as Whistler residents.

As the full-time population of Whistler has grown over the last 30 years, other neighbourhoods have started hosting their own Halloween trick or treating, including Millar’s Pond and Cheakamus Crossing.  New traditions have developed, such as the annual Cheakamus Zombie Walk.

As of last week, however, Halloween at Tapley’s Farm is still going strong.

One response to “Trick or Treating at Tapley’s”