One of the most-talked about topics in Whistler each November is opening day: when it will be, what the conditions will be like, and how the rest of the snow season looks.  Often this causes us to look back at previous opening days, but this week we thought we’d look further back, and see what the community of Alta lake was talking about 60 years ago, years before lifts started operating on Whistler Mountain.

Alex Philip stands on the snow he’s been clearing from the door. A fascination with snow and weather was just as popular in the early days of Whistler. Philip Collection.

According to the Alta Lake Echo, the (more or less) weekly newsletter of the Alta Lake Community Club (ALCC), those living at Alta Lake in 1959 found the topic of November weather just about as fascinating as we find it today.  The newsletter of November 3 reported clear skies, a brisk north wind, and snow within a couple hundred metres of the lake, with a chance of flurries int he afternoon.  Don Gow was even reported to have said, “This is the year of the big snow.”

The next few weeks didn’t seem quite as promising.  A lack of snow, however, didn’t seem to be as unwelcome as the thawing ice on Alta Lake.  By the beginning of December, there was reportedly “beautiful” ice forming on the lake, but rain and warmer temperatures washed it away with the snow.  This, it would seem, was particularly frustrating for some “would-be skaters who got their Christmas presents early.” 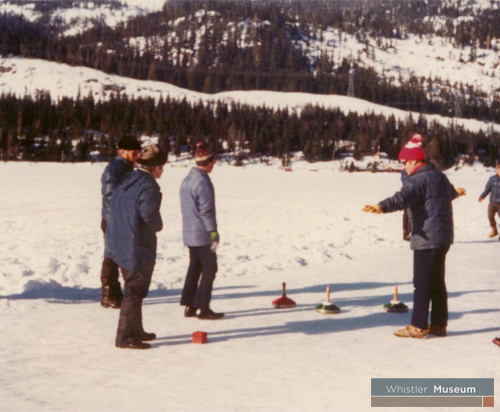 Though ice stock sliding came later in the 1970s, Alta Lake residents spent many winter days out on the frozen lake. Petersen Collection.

Unlike today, when many people arrive for the season in November and businesses are busily preparing for a bustling winter, Alta Lake residents were looking ahead to a slower pace after a full summer.  Rainbow Lodge officially closed for the season soon after the Armistice Day Holiday, and the fishing season would appear to have been finished.  Bill and Phyllis House, who visited Alta Lake each November to fish, determinedly went out in the snow but reportedly caught nothing, a first in 20 years.

Some Alta Lake residents took the slow winter season as a chance to take a holiday, visit friends and family, or even return home after seasonal work, such as Ivor Gunderson who returned to Norway once Valleau Logging ceased operations for the winter.  Alex and Audrey Greenwood, the owners of Rainbow Lodge, left for two weeks to San Francisco, and Russ and Maxine Jordan, the proprietors of Jordan’s Lodge, left to wait out the cold season in warmer climes.

Many of the cottages and lodges on Alta Lake were built for the summer, and were not always winterized to keep occupants warm through the winter. Photo: Mitchell

There were few evening entertainments at Alta Lake once the summer guests left and the days grew shorter.  The ALCC began organizing poker sessions in November.  Participants took turns hosting, and some games were played at the Alta Lake School building.  Though scores and winnings were not printed, the Alta Lake Echo did give a fair impression of how the games went, reporting on December 8 that, “Last week saw a good turnout at Cruickshank’s Casino.  This week, Kelly & Dick [Fairhurst] are going to win their shirts back.  They’ll use their own cars.  Come one, come all…”  Interestingly, these reports were printed in the newsletter’s “Wildlife” section.

We, and many others, are looking forward to a busy winter, but it was not so long ago that winters meant something very different in the Whistler valley.

2 responses to “Before Opening Day”