In February 1968, The Garibaldi’s Whistler News (GWN) published an article entitled “Were 107 Skiers Really Lost on Whistler Mt.?”  The article was meant as a (somewhat belated) response to articles published in Lower Mainland newspapers on December 4, 1967 about an incident that occurred at the Blue Chair on Whistler Mountain.

In 1966, the Blue Chair had become the second chairlift to be installed onWhistler Mountain.  In was located in the same general area that the Harmony Express run today, loading in the same area and carrying skiers up to where today’s Emerald Chair offloads.  According to Lynn Mathews, the Blue Chair was part of a popular circular route.  After riding the gondola and Red Chair, skiers could go up the T-bar, hike over to the back bowl, and ski down to the base of the Blue Chair, which they could take back up to start the circle again.

On Sunday, December 3, 1967 the Blue Chair was shut down for part of the day, and skiers who had expected to take the lift back up were led out from the bottom of the chair via the beginner tail, just over 3 km.

The view from the lineup at the Blue Chair, today the location of the Harmony Chair.  Whistler Question Collection.

According to The Vancouver Sun, the Blue Chair broke down, “stranding scores of skiers,” but the versions of events presented by those who were “stranded” differed greatly from the lift company.  Those who talked to the paper claimed that 117 skiers were led by four ski patrol volunteers on “a gruelling 6 1/2-hour hike through shoulder deep snow,” with skiers needing rescue after falling off of the single-file trail trampled by the patrollers, finishing long after dark (in December, sometime after 4 pm).

The Sun wrote that the lift company’s response to these claims was to “sneer”.  Jack Bright, then the area manager for Whistler Mountain, reported that it took less than four hours for the group to hike out, using a ski run “which happened to have a bit more fresh snow on it.”  The company handed out free passes to those who had been stranded, but claimed that the number of passes handed out did not necessarily reflect the number stranded, as “Everybody claimed to be stranded so they could get a free ticket.” 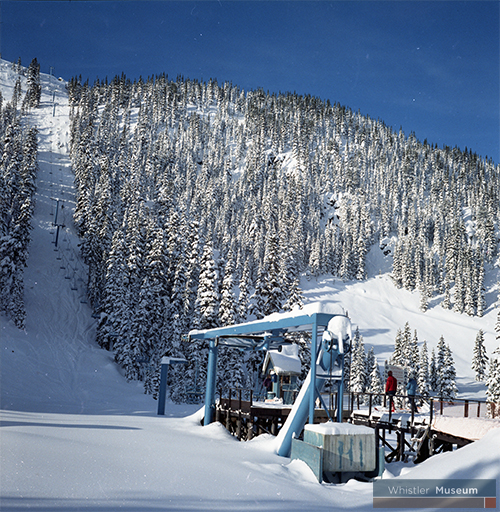 Thanks to the colour coded nature of the early Whistler Mountain chairlifts, it’s easy to identify chairs in colour photographs! George Benjamin Collection.

Two months after the incident, the lift company used their publication to clear up lingering questions.

According to Jack Bright in the GWN, high winds and extremely heavy snow caused mechanical difficulties for the Blue Chair, causing the engine to overheat and automatically stop the lift.  The operator announced that it would take from an hour to an hour and a half for the engine to cool off before they could restart.  The auxiliary engine was used to evacuate the chair.  The decision was made to send those waiting in line, accompanied by five experienced patrollers and employees, out along the beginner trail.

Due to the snow, it took longer than expected for the group to make it out.  The trail was marked and, according to Bright, “however irritable people were, there was a general gay harmony throughout the safari.”  This agrees with the memory of Lynn Mathews, who remembered her husband Dave, Whistler Mountain’s operations manager, coming home late and announcing that there were over 100 people lost on the mountain, although she said he told her, “They’re not lost, they’re having too much fun at the moment.”  According to Lynn, Dave claimed the skiers in the group were making snow angels, throwing snowballs, and generally having a good time.

No matter what truly happened on the mountain that day, this experience is unlikely to be repeated today as over the past five decades both chairlifts and grooming (as well as on-mountain communications) have advanced.