It is well established that Whistler residents have a strong history of volunteering, both for major events and more regularly within the community.

Perhaps the largest event put on in Whistler with the help of volunteers was the 2010 Olympic Winter Games, which required hundreds of volunteers each day.  One specific volunteer program that was in place during the 2010 Games was Ask Me! I’m a Local.

The Ask Me! program was conceived by Whistler resident Janis McKenzie and her visiting friend Dan Perdue over a cup of coffee in January 2009.

The idea was simple: connect friendly, button-wearing locals to visitors who might need some help.  Local residents would sign up to wear an Ask Me! button while in the Whistler Village, and the button would identify them as someone visitors could approach to ask directions of, make recommendations, or even take a photo (though selfies were becoming increasingly popular, front-facing cameras on phones were not as common as they are today). 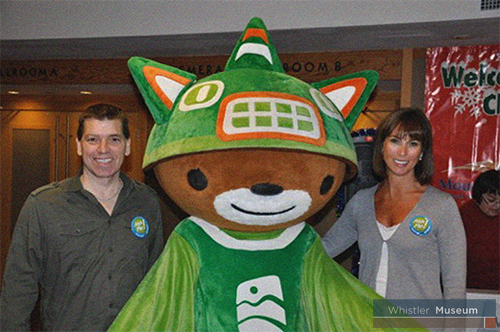 McKenzie approached the RMOW, which agreed to fund the program, and got to work developing it so it would be in place by 2010.  According to the Ask Me! strategic plan, “[Whistler is] a community that prides itself on being friendly and reaching out to help our visitors in their native tongue.  We do this because we genuinely care and know that the experience our guests have will define our future.”  Unlike official Olympic volunteers with the Vancouver Organizing Committee for the Olympic and Paralympic Games (VANOC), this program did not require a set number of shifts often lasting eight to ten hours.  This meant that residents could volunteer and act as ambassadors for Whistler simply by walking through town wearing their button.

To recruit volunteers and raise awareness of the program, a launch party was planned for October 1, 2009.  While McKenzie said they hoped to have 80 to 100 people attend and sign up, over 200 people lined up to attend the party at the GLC.  Those who signed up for a button at the party were entered into a draw prize and were eligible to win a season pass donated by Whistler Blackcomb, who also covered all of the costs for the party.

According to McKenzie, over 600 people had registered for buttons by the time of the Games.  The buttons were available in five languages (English, French, German, Spanish, and Japanese), and businesses could also take part by displaying a decal in their window. 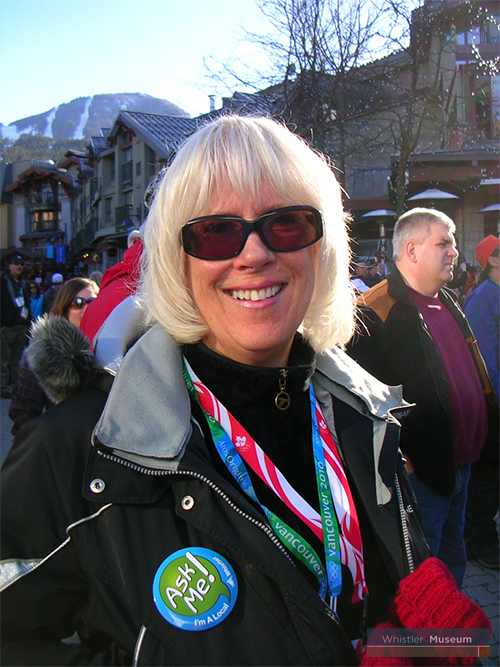 Joan Richoz poses proudly with her Ask Me! I’m a Local button during the 2010 Games. Photo courtesy of Claire Johnson.

Though organizers originally thought that few participants would want extra training, over 80 per cent of participants registered for in-person training and over 90 per cent registered to receive a monthly newsletter in order to learn more about Whistler.

The success of the simple grassroots program was recognized in the media and the idea spread, with Vancouver introducing its own version of the program for the Games, and Russian representatives asking about it ahead of their own Games.

Though the Ask Me! buttons can no longer be seen, many of its duties are now carried out by the Village Host program.  McKenzie described the program as “an incredible journey” that exceeded all expectations.  Throughout the Games locals could be found in Whistler proudly wearing their buttons, answering questions, and giving directions to the thousands of visitors and participants of the 2010 Olympic Winter Games.  The main idea behind the program remains relevant in Whistler today: “It’s the smallest things we do that will make the biggest difference for our guests’ experience.”