A Dairy at Alta Lake

When Alfred Barnfield first came to the Sea to Sky area he likely wasn’t planning to one day be delivering milk and cream by canoe.  After arriving in Canada, Alfred spent a few years working various jobs before settling in Squamish in 1891.  Around that time, the provincial government paid him $1,000 to inspect the condition of the Pemberton Trail, which had not been widely used since its construction in the 1870s.  The result of his inspection allowed the Pemberton Trail to reopen to packhorse traffic and would have provided Alfred with his first views of Alta Lake.

Alfred Barnfield atop Wedge Mountain, with what appears to be a rock pick, while working as a prospector.  Barnfield Collection.

In 1903 Alfred formed a group with a few other Englishmen, imaginatively named The London Group, and prospected around the Garibaldi and Black Tusk area but never made any substantial finds.  Two years later he returned to the Alta Lake area to preempt and clear land on the northeast end of the lake.

That same year, Daisy Hotchkiss came to Brackendale with her sister and brother-in-law at the age of fifteen.  Alfred and Daisy were married five years later and the pair continued clearing the land at Alta Lake. 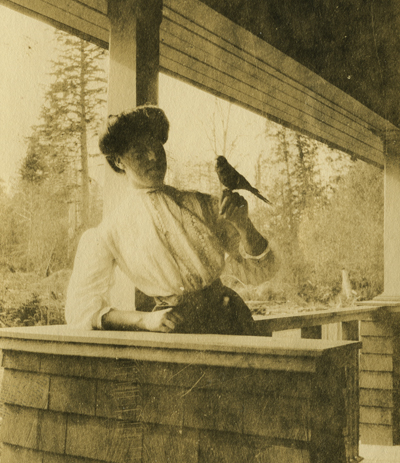 Daisy Hotchkiss was 23 years younger than Alfred Barnfield, but by all accounts the pair had a very successful marriage.  Barnfield Collection.

As Alta Lake gained a reputation as a fishing destination and summer resort, Alfred and Daisy and their four children (Fred, William, Vera and Charles) established a dairy farm on their land to supply the lodges and cottage around the lake with fresh milk, cream, eggs, and butter.  While grocery orders could be delivered from Vancouver by train, fresh dairy products would have been hard to come by on a daily basis.  At one point the Barnfields kept fourteen cows, as well as chickens and a few pigs. 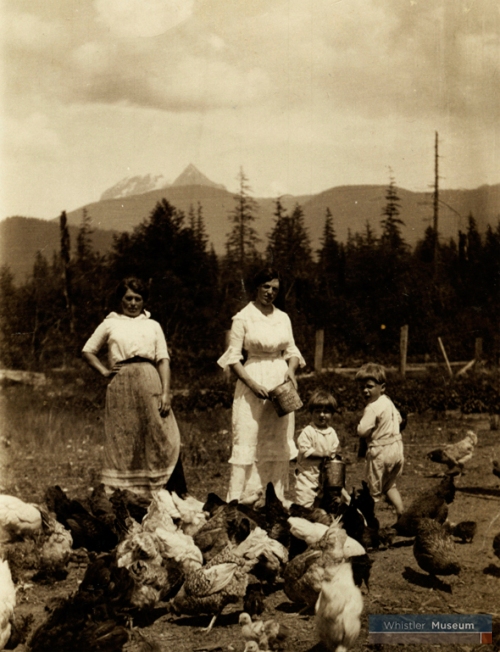 Daisy Barnfield feeds the chickens with some help from the children, seemingly at the Brackendale property.  Barnfield Collection.

In an interview with the museum in 1993, Vera Merchant remembered her father loading his canoe with boxes of milk and delivering it around the lake.  According to Vera, he made his deliveries every morning, even when the weather was questionable.  She recalled, “He never missed a morning and sometimes it would be so stormy he just couldn’t hardly make that canoe go.”  Luckily for Alfred, he was able to end his deliveries with a visit in the kitchen at Rainbow Lodge, where he would be brought up to date on all the local news and gossip.

The Barnfields moved their dairy farm to Brackendale in 1926 but the family continued to spend their summers at Alta Lake, delivering milk and cream by canoe.  Vera remembered that every summer they would rent a cattle car and load up the cows, crates of chickens, and pigs for the rail journey to Alta Lake.

For the Barnfield children, summers weren’t all about work.  Their father taught them to swim and apparently they took to the water like fish.  The Barnfields kept a horse for working on the land and as a small child Vera would take him for rides, going so far as Green Lake where she would visit her friend at the Lineham Mink Ranch.  She recalled that she never worried about the bears and cougars known to be in the area, feeling safe atop the large horse.

Vera Barnfield returned to Alta Lake in the 1930s and worked a couple of summers at Rainbow Lodge.  Philip Collection.

Even after the Barnfields topped bringing their dairy up to Alta Lake for the season they kept ownership of the land at the northeast end of the lake until after Alfred’s death in 1960.  In the 1970s Daisy sold most of the property to Robert Bishop and Bernard Brown and it was developed as Adventures West and the Whistler Cay neighbourhood.  She gave each of her three surviving children (Charles had been killed in the Second World War) about an acre of lakefront property.

Though there are no traces of a dairy left, in 1988 the last of Alfred’s property was sold and the family can be seen in the addresses of those who live there: Barnfield Place and Daisy Lane.

One response to “A Dairy at Alta Lake”