Turning 40 in the Whistler Village

The past few months have seen various businesses reach 40 years, including Whistler Magazine, Blackcomb Mountain, and even The Grocery Store just last week.  This is not surprising, as at the beginning of the 1980s Whistler was undergoing huge changes and growth.  The first buildings of the Whistler Village were being completed and, in turn, the first Whistler Village businesses were beginning to open to the public.

While many of the original Village businesses have changed over the past four decades, some have been constant fixtures, like Tapley’s Pub.

The Windwhistle Building was one of the first lots to be completed in the Whistler Village, along with the Hearthstone Lodge, the Rainbow Building, and Blackcomb Lodge.  The plans for the building included a somewhat semi-circular shaped space just off Village Square that would house the Village’s first bar.  During construction, one of the more notable features of the building was the copper pillars that, on a clear day, reflected the sun.

An artistic view of Tapley’s under construction. George Benjamin Collection.

Tapley’s original opening date of January 23, 1981, was delayed when a section of Highway 99 at Culliton Creek was washed out on January 21.  The road reopened on January 26 and, on January 29, Tapley’s Pub opened for business.

The Tapley’s crowd enjoy a few brews in the sun on Sunday, March 1. Photo by Greg D’Amico.  Whistler Question Collection.

Opening day was presided over by John (J.R.) Reynolds, Tapley’s first proprietor, who reportedly looked “relieved that it had all finally come into place.”  All staff were on hand to welcome both local residents and visitors.  According to the Whistler Question, staff included Roland Kentel, Geoff Fisher, Ross Morben, Al Mattson, Rod MacLeod, Steve McGowan, Sheryl, Nancy, Kim, Heather, and Janet (we are not sure why reports of the opening did not include last names for female staff, but would appreciate anyone who could help us fill them in).  The day got off to a quiet start at 11 am but steadily filled as people came for beer, snacks, and darts, leading to a packed house by closing time.

Tapley’s was one of many businesses to open in the Whistler Village in 1981.  Just a couple of weeks later, Stoney’s opened on February 14, occupying the space now home to La Bocca.  Co-owned by Dick Gibbons, Jack Cram, and Lance Fletcher, Stoney’s was the first business of Gibbons’ to open in the Village.  The Longhorn Saloon, his second, would open by the end of the year.  Like Tapley’s the Longhorn is still operating in the Village today, though it looks a little different.  The two businesses are now connected, as Tapley’s Pub was taken over by Gibbons Hospitality in 2004. 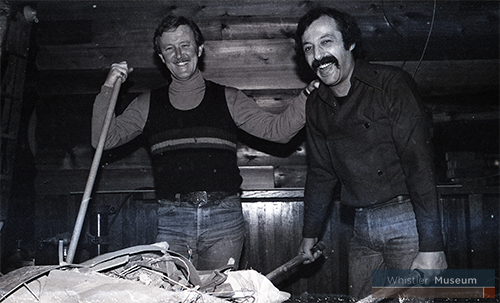 Owner Dick Gibbons (left) and designer Gilbert Konqui lend a hand getting the Longhorn ready for action. Located in Carleton Lodge in the Village, the 250-seat restaurant is ready to serve you a drink and a quick, hot meal.  Whistler Question Collection, 1981.

The last forty years have certainly seen some changes at Tapley’s.  Looking at early photos from 1981, the many windows provided views straight to Sproatt and Whistler Mountain, views that have since been blocked by further construction of the Village and the Whistler Conference Centre.  While the copper pillars are still there, other parts of the decor and furniture have changed along with the view and a smoking lounge built in 2000 has evolved into a large patio area.  Keep an eye out over the next few months and years as more and more of Whistler’s businesses and organizations, founded during a decade of incredible changes, reach new milestones.

One response to “Turning 40 in the Whistler Village”