Thanks to the recent donation of some UBC Varsity Outdoor Club (VOC) Journals to our research collection, we’ve been enjoying learning more about how the VOC Cabin came to be.  Last week we took a look at the long search for a site, which culminated in 1965 with a piece of land in today’s Nordic Estates that was to be reserved for club cabins (find it here).

Once the process of finding a site was complete (and even before provincial government surveyors arrived to do their own survey of the area) construction began on the VOC Cabin at Whistler.  Most of the planning and construction work was done by VOC members, including many hours contributed by grads such as Byron Olson.  An architect, Olson postponed his planned trip to Europe to design the structure.  His plans called for a main structure with a lounge to accommodate parties and events of 150 people, a large kitchen, washrooms, a boot-drying room, storage, and separate dormitory structures designed to sleep 90.

The plan was to construct the VOC Cabin in stages, beginning with the main structure.  The first stage included putting up walls and getting the roof on by Christmas 1965.  Construction began in August with “enthusiastic work parties of VOC’ers.”  While members volunteered to work on the cabin, the VOC did hire a CAT driver to help clear and level the site.  In the first couple of months, a road to the site was cleared, trails were cut and a waterline was installed.  Building was not, however, always straightforward. 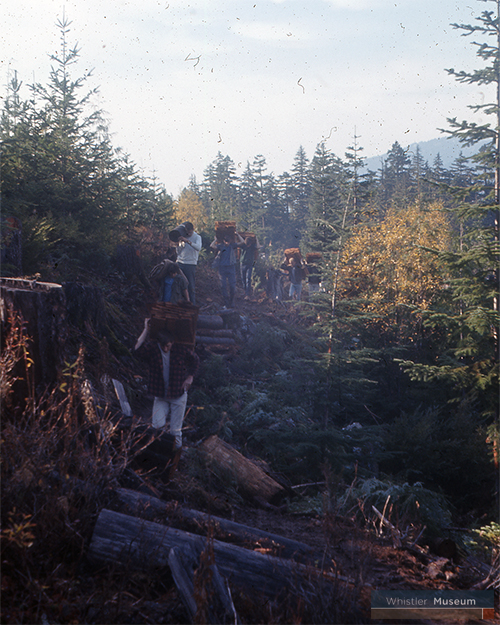 Karl Ricker, who was heavily involved in the project, recalls that there was an old logging road that went to the site, which was used by the CAT driver and to get gravel for concrete delivered.  However, the logging road became unusable after the first rain.  Instead, equipment and supplies would be brought up the back road that came within half a kilometre of the site and then carried for the rest of the journey.  Most of the supplies came from Vancouver and, as the highway to Whistler had not yet been completed, had already been on quite a trip.

In the VOC Journal of 1965, Judy MacKay wrote that “autumn brought wind, rain, and a deluge of prospective new members to the site.”  Ricker recalls that each weekend between fifteen and 100 volunteers would arrive to work “like beavers” on the VOC Cabin.  The VOC members were not the only ones making their way to the site – according to Ricker a few Alta Lake residents would also appear each weekend to observe the students’ work. 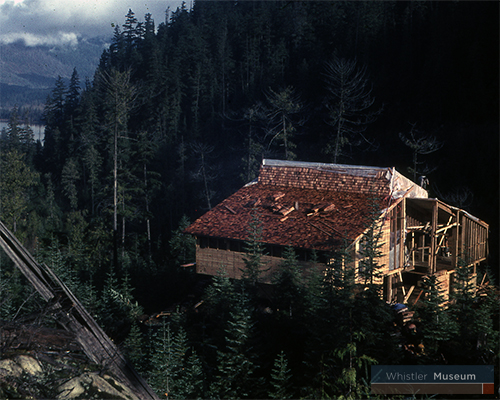 The VOC Cabin begins to take on a familiar shape. Karl Ricker Collection.

By mid-October the VOC was getting close to finishing the first stage of construction.  By the end of the month, construction was at a point that the VOC Halloween party could be held at Whistler and MacKay reported that, “The cabin sagged and swayed in rhythm to every polka beat.”

Later in the season, however, mid-terms unsurprisingly meant that student labour was harder to come by and members of the Alpine Club helped with the roof and putting on shakes.  Ricker remembered carrying the windows for the cabin from the highway with snow on the ground about two weeks before the beginning of UBC’s December break.

Though there was still a lot of work to be done, the VOC did finish the first stage of construction by Christmas and the cabin was ready for some students who chose to spend their break at Whistler.  The lifts on Whistler Mountain, however, were not quite to ready and did not open in December as planned, leaving the VOC members to spend their holidays ski touring through the area.

One response to “Constructing a Cabin”