Why Is That Named Horstman?

Over the past few months we have received quite a few donations of artefacts and archival records at the Whistler Museum, including scale models, archival films, and photographs in various forms. One recent donation included a copy of a land title of an early 20th century Alta Lake resident whose name is well known throughout the valley: Harry Horstman.

Harry Horstman moved west from Kansas at some point prior to 1912. He staked a mining claim on Mount Sproatt, where he spent much of his time searching for copper and iron (and possibly dreaming of gold). He also preempted two parcels of land, one between Nita and Alpha Lakes and another at the other end of Alpha Lake. Preemption was a method of acquiring Crown Land from the government for agriculture or settlement; preemption did not take into account indigenous claims to land, and the land that Horstman preempted is part of the unceded territory of the Squamish Nation and the Lil’wat Nation. According to this recent donation, Horstman’s property at the south end of Alpha Lake was known as Lot 3361 and was made up of 150 acres, more or less.

Horstman kept a small farm on his property near Nita Lake where, according to Jenney Jardine, he had fifty to sixty chickens, “all sorts of potatoes and rhubarb and gorgeous cauliflowers.” He sold eggs and fresh produce to Rainbow Lode and other Alta Lake residents to supplement his income from prospecting. Part of his property on Alpha Lake was acquired by Thomas Neiland, who moved to Alta Lake with the Jardine family in 1921 to set up a forestry business. It is not, however, clear how much of the 150 acres were used by Neiland or whether Horstman made use of the rest of the land.

While some Alta Lake residents, such as Jenny Jardine’s brother Jack and railway section foreman Fred Woods, got to know Horstman relatively well, others described him as an “odd man” and may have seen him mostly from a distance. According to Pip Brock, Horstman “didn’t enjoy people that much,” though he was part of the Alta Lake Community Club in the 1920s and was even put in charge of the coffee at their first picnic.

In 1936, Horstman sold his Nita Lake property to Russ Jordan, who reportedly bought the approximately 160 acres for $2000. When Horstman began to find the physical labour of prospecting too much, he retired to his cabin on Alpha Lake, presumably on his property on the south end of the lake. He remained there until about 1945, when his neighbours on today’s Pine Point, Dr. and Grace Naismith, arranged for Horstman to move to a nursing home in Kamloops.

Harry Horstman died in 1946 and was buried in Kamloops, though his name can still be found throughout Whistler, most notably the Horstman Glacier on Blackcomb Mountain. In an interview in the 1980s, however, Jack Jardine expressed his confusion as to why Horstman’s name was given to a glacier on a mountain Horstman was never known to climb. 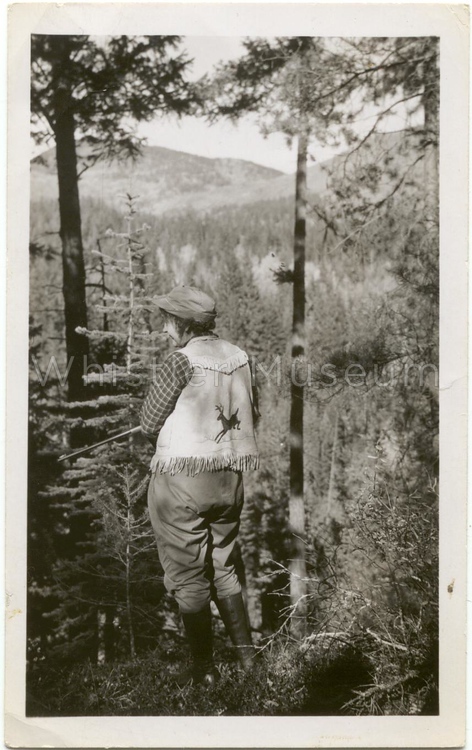 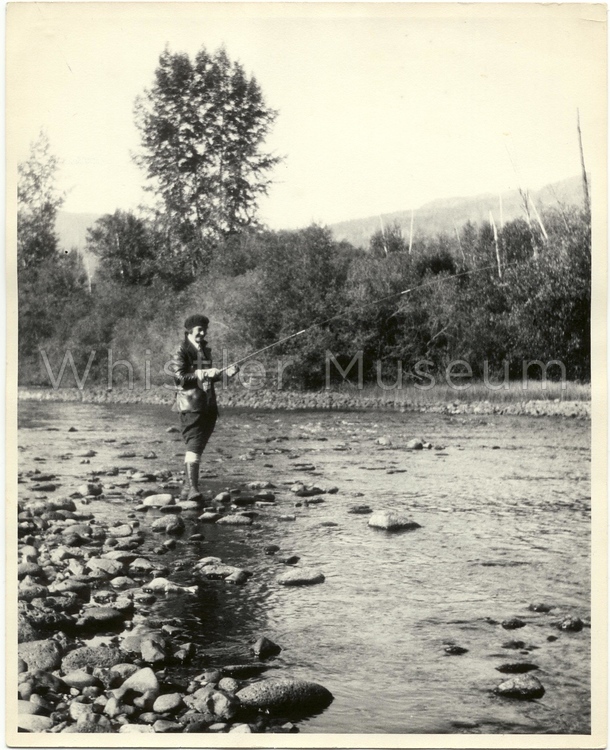 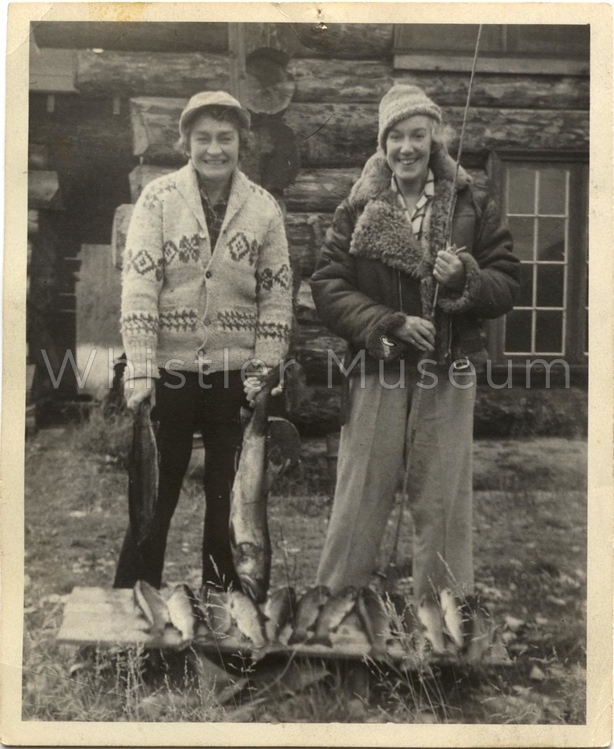 File this under “people we wish we knew more about.”

We can’t even find Dr. Baldwin’s birth or death years, and he is referred to as both “A.G. Naismith” and “Baldwin Naismith.” Records indicate that his wife Grace Hilda passed away in Victoria at the age of 83 on August 9 1977, but we don’t know her maiden name or place of birth. Yet we have over a dozen photos of them, they owned a cabin in the valley, and they appear to have been close friends to Myrtle and Alex Philip for close to 50 years.

These tantalizingly incomplete stories can be amongst the most fascinating, and frustrating, subjects for historical researchers. Let’s review what we know…

Our earliest record comes indirectly through another Alta Lake pioneer Tom Neiland, who claimed to purchase land from Dr. Naismith on Alta Lake in 1921 in order to set up his own logging business. Then in 1927 Myrtle Philip sent a postcard to her sister Jean Tapley in Seattle, which included the line “Dr. & Mrs. Naismith are here – look fine – send love to you” so by this point they were well-known to the Philip/Tapley clan, but it is not known whether they had a cabin in the valley or were just regular visitors to Rainbow Lodge.

Grace Naismith at Rainbow Lodge holding a wood carrier inscribed “To Myrtle / Many Happy Returns / from Grace” with a rendering of Rainbow Lodge (presumably, a birthday present). A smiling Myrtle looks on from the Rainbow Lodge porch, circa 1940s.

From several sources we do know that Dr. Naismith worked as a pathologist near Kamloops, some recollecting that he was a lung specialist at the now-defunct Tranquille tuberculosis sanatorium on the north side of Kamloops Lake. Jenny Jardine, Tom Neiland’s step-daughter, stated that the doctor “was an Ontario returned soldier and she was a war bride. They had a Chinese foster son.” When local pioneer Harry Horstman, who lived near to the Naismith’s cabin on Alpha Lake, became too infirm to carry on his bachelor lifestyle they arranged a new home for him at a care facility in Kamloops, where he passed away in 1946.

The Naismith’s cabin on Alpha Lake, on what is known today as Pine Point, circa 1930.

By 1930, if not earlier, the Naismith’s owned a cabin on the shores of Alpha Lake, where Pine Point Park is now located. Also beginning in the 1930s we have several photographs of Myrtle and Grace together at Rainbow Lodge, in sophisticated dress on the streets of Vancouver, or looking quite casual around Mahood Lake, east of Quesnel, where the Naismith’s had another cabin.

Myrtle Philip and Grace Naismith in street clothes in Vancouver. A Photographer’s stamp on the back of the print reads : “MOVIE SNAPS / 541 Granville Blvd / ‘Souvenir of Vancouver, B.C.'” According to web research, Movie Snaps was a Vancouver photography business specializing in street photography – where photographers solicited pedestrians offering to take their photos for a fee (like an urban version of what Coast Mountain Photography does on Whistler-Blackcomb).

As early as 1929, the Mahood Lake cabin became a regular fall retreat for the Philip’s, where they could unwind after the busy summer at Rainbow Lodge. In an upcoming blog post we’ll go into a bit more detail about the Philips’ frequent fall visits to the Cariboo.

Another glamorous “street photography” capture of Grace and Myrtle, this one appearing to be taken during the 1960s.

For now, that is the extent of our knowledge. We will have to be content placing the Naismith’s in a long line of visitors to our valley who became dually charmed by the landscape and by the Philip’s gracious hospitality. Of course, if any readers out there can share more of this story, we’d love to hear it.

Just in case these glamorous city shots were giving you the wrong impression of Grace, we’ll leave you with this interesting little snippet from the August 3rd 1962 edition of the Prince George Citizen that suggests that Grace was equally comfortable in the bush as she was in the city.