What is the oldest building in the Whistler Village?

This is a question we have been asked many times, especially when leading Valley of Dreams Walking Tours through the village during the summer.  While some questions about Whistler’s history have very simple answers, the answer to this one is not entirely straightforward.

Municipal Hall could be considered the oldest.  The structure was built in the early 1970s and opened its doors in 1974, a year before the Resort Municipality of Whistler was formed and a full five years before construction began on plans for the stroll-centred village we know today.  At the time the building was home to a Keg ‘N Cleaver restaurant, better known as The Keg.  It was not, however, located in the village.

One section of the Keg makes its way slowly up Lorimer Road. Note the rocks blasted off the corner and the BC Hydro employee on the roof. Photo: Whistler Question, 1981

The original location of the Municipal Hall building was in Adventures West on the north end of Alta Lake.  Over the May long weekend of 1981, the building made a well-documented move to its current location.  Despite its earlier construction, the Keg was moved beside another building that could also claim the title for oldest Village building by opening in the Village a year earlier: the Public Safety Building.

Construction of the Public Safety Building (PSB) began some time in 1979.  During this period it went by various names, including the Public Service Building and Tri-Service Building.  An image of the architect Raymond Letkeman’s drawing of the building was published in the Whistler Question in July and by the council meeting of October 5, when approval for a development permit for construction of the building was given after a public hearing, the progress on the PSB was reportedly “up to the roof line.”  The building was predicted to be closed in by early November and ready to occupy in the early winter. 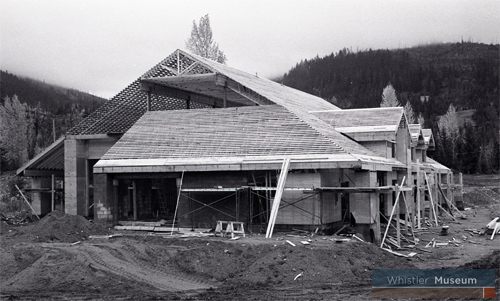 The new Public Safety building starts to take shape as the snow creeps down Whistler Mountain behind.  Photo: Whistler Question, 1979.

Many other buildings were under construction at the time.  In November new access roads into the town centre were poured.  Photos from 1979 show the town centre as a large construction site with a school, the first Myrtle Philip School, along one edge.  The school relocated to Tapley’s Farm in 1992 and the old building was torn down, taking it out of the running for oldest village building.

The PSB was officially opened by Mayor Pat Carleton and a lineup of officials on May 3, 1980.  Representatives from the three services to be housed in the building (the RCMP, the BC Ambulance service and the Whistler Fire Department) were present, as well as approximately one hundred onlookers from the public, a good crowd for such an event in 1980.  Once the ribbon was cut and the fire doors and flag raised, the public was invited inside to view the fireman’s slide pole and the new jail cells.

The building was not completely finished by May 3.  The smell of fresh paint still lingered and some parts were still in the “dry-wall” stage.  A heli-pad behind the building had been completed only the day before.

The PSB was put to good use within weeks of it opening.  On May 11 a fire at the municipal landfill led to the first call out of the Whistler Volunteer Fire Department from their new home and by May 22 the RCMP reported that six people had spent some time in the new cells.

Not all of the space in the PSB was assigned when it first opened.  There was talk of rooms being used as a courthouse, meeting rooms or council chambers.  Over the years the services housed in the PSB have changed, as has the building.  The ambulance service moved to its own building on Lorimer Road and space was added behind the PSB to house the RCMP service.