Walking through Olympic Plaza in the winter, chances are you’ll see some people out skating on the ice.  Plans for an ice rink in Whistler Village date back to the 1980s, though the original plans looked a lot different than the rink you see today.

In March 1980 construction began on the Whistler Village Resort/Recreation Centre.  According to a write up in Whistler News, Summer 1980, the Resort Centre would be a “three-level, multi-purpose, indoor recreation and conference centre” or approximately 72,000 square feet (the Whistler Conference Centre today is somewhere over 40,000 square feet).  The proposed budget for the project was in the $5.5 to 5.8 million range with funding provided by the Province of British Columbia in the form of a TIDSA (Travel Industry Development Subsidiary Agreement), the Recreation Facility Assistance and the Whistler Village Land Company.  This budget did not include operating costs. 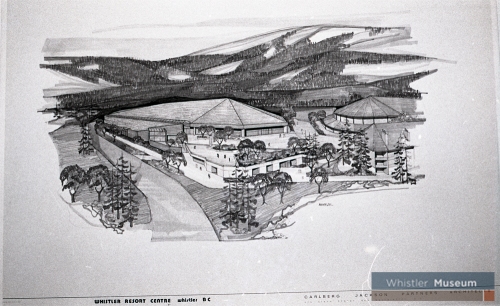 What could have been: An artist’s rendering of the proposed Whistler Resort Centre, 1980. Whistler Question Collection.

The list of anticipated recreation activities that would have been housed in the Resort Centre is extensive.  Plans included a 20,000 sq. ft. Olympic-sized ice rink, a 3 x 20 metre swimming pool, a whirlpool, saunas, four racquetball courts, a squash court, locker room facilities, the Golf Pro Shop for the Whistler Golf Course, and even a restaurant.

Located on the top floor, the restaurant and lounge area would seat 320 people and “provide guests with views of the ice-skating and swimming activities as well as the surrounding mountain landscape.” 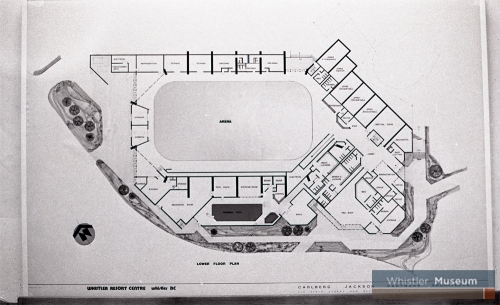 The plans for the lower level of the Resort Centre. Whistler Question Collection.

Many of the proposed facilities were multi-use.  A system of interlocking insulated panels meant that in just under four hours the ice rink could be transformed to either carpeting or astroturf to host banquets, staged performances, tennis matches or basketball games.  The Golf Pro Shop would be transformed in the winter months into a cross-country skiing centre.

When a recession hit North America and Whistler in late 1981 the Resort Centre, like much of the Village, was still under construction.  With the economy failing, real estate sales falling and interest rates climbing above 20%, the Whistler Village Land Company found themselves with debts of almost $8 million, liabilities coming to $30 million, and assets in the form of land that nobody wanted to buy. 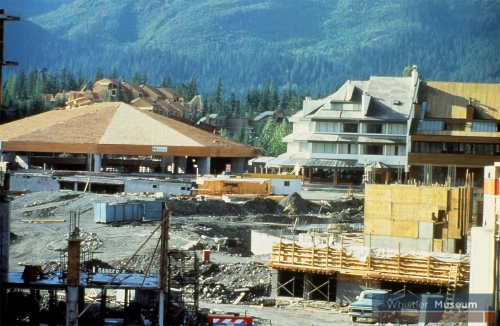 The Resort Centre under construction, along with the rest of the Whistler Village. Eldon Beck Collection.

In January 1983 the provincial government under Premier Bill Bennett stepped in and formed Whistler Land Co. Developments, a Crown corporation to take over the liabilities and assets of the Whistler Village Land Company.  Chester Johnson, a Vancouver businessman, was chosen by Bennett to chair the board of this new Crown corporation and take over the development of Whistler Village.

Before the building could be reconstructed some of it had to be deconstructed. Whistler Question Collection, 1984.

One of the decisions made by Johnson was to reconstruct the Resort Centre as a conference centre without all of the extra recreational facilities.  A convention business consultant and a Los Angeles architectural company were brought in to convert the Whistler Village Resort/Recreation Centre to the Whistler Conference Centre, a year-round facility meant to attract conventions and visitors to the resort.  Work was well underway on the Whistler Conference Centre by the end of 1984 and was completed by 1986, with no ice rink in sight.  Whistler wouldn’t get an indoor ice rink until 1993 with the opening of the arena at the Meadow Park Sports Centre.

The SoCreds Party in Whistler!

Thirty years ago, Whistler was at the centre of the BC political universe. During the week culminating in July 30th 1986, the provincial Social Credit Party held their leadership convention here, as they sought to find a replacement for outgoing party leader Bill Bennett.

The Whistler Driving Range was transformed into a political fair grounds, where leadership hopefuls could promote their political brand.

The Socreds, as the party was commonly known, had a close connection to the nascent resort. Although the initial decisions to create the RMOW, develop skiing on Blackcomb, and build a tourism-specific village at the base of the mountains had been made during the 1972-1975 reign of the NDP, the Socred’s ideological opposites and bitter rivals, the Socreds (to many people’s surprise) continued to support Whistler Village when they regained power in 1975.

Most notably, this included assuming provincial control of a heavily indebted Whistler Village Land Company in 1983. Without that decision, Whistler Village would be a very different place than it is today. At major political risk, the Socreds had hitched their wagon to Whistler Village.

The buzz in Village Square was inescapable.

In 1986, with Whistler Village construction completed and the resort experiencing rapid growth and approaching economic stability, it was the perfect venue to highlight one of the Socred’s major successes in governance.

The carnivalesque atmosphere on the Whistler Village driving range during the 1986 SoCred Leadership convention. Photo by Dave Steers.

In typical fashion, Whistler locals made sure to apply their own interpretation of the term “political party.” As local photographer Dave Steers recalls:

What became evident rather quickly to Whistlerites was that the convention offered interesting eating and drinking opportunities. Many of the would-be leaders didn’t seem to mind wining and dining the locals in town and, not surprisingly, full advantage was taken.

Tapley’s regulars could be found schmoozing with delegates over bar-b-q’d bison burgers. Citta’s patio-dwellers migrated to the driving range to trade political views and and down beers with the movers and shakers of the Social Credit party. It made for some interesting exchanges.

A kind of poster war developed in the village. Rumour had it that local eateries were selling walls and pillars to candidates who would then paste their campaign posters onto them. A pillar in the right location was rumoured to be worth over a thousand dollars.

Village Square was turned into a central convention space and outdoor billboard for all of the contenders (at least those that could afford the temporary real estate for their signs).

In the end, Bill Vander Zalm won the convention and assumed leadership of the party, overcoming rivals Grace McCarthy and Brian Smith, among others. Notably, the 12th and last place finisher was none other than future Prime Minister of Canada Kim Campbell.

The 1986 convention was widely regarded as a successful and energizing political event, and Vander Zalm initially enjoyed high approval ratings as BC Premier. Thankfully, however, Whistler’s fortunes weren’t tied to the Socred brand, as Vander Zalm was forced to resign due to a controversial conflict-of-interest case in 1991, and the ultimate decline of the Social Credit Party followed soon after.

Posted in Beyond Skiing, Ski-Town stories