Crafts in the Park is back!  Each week we partner with the Whistler Public Library to present a story and craft in Florence Petersen Park.  This year’s theme is “When I Was In Whistler, I Saw…” and each week will feature a different animal, activity or object that could be seen in Whistler, either in the present or in the past!

Crafts in the Park runs on Wednesdays from 11am-noon.  It is a drop-in program for all children ages 4-12, with a chaperone present. 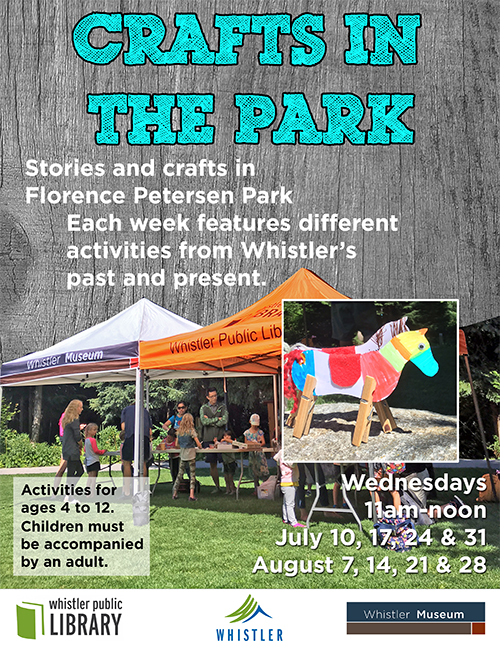 Have you ever seen a beaver in Whistler?  In making their home in the valley, beavers made dams along waterways and changed the landscape for many years to come.  Many of the rivers and streams in Whistler are still the way they are because of beavers.  For our first craft, we’ll be creating cone beavers and paper bag dams. 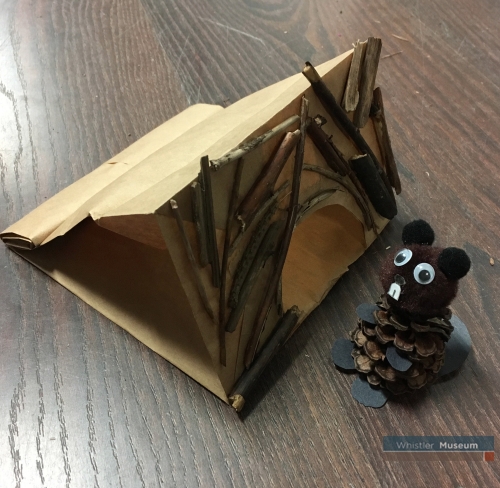 Traveling to Whistler became a lot easier in 1914 with the arrival of the Pacific Great Eastern Railway.  Instead of 3 days, the trek from Vancouver now took about 9 hours (still a lot longer than we’re used to today).   The railway had a major influence on making Whistler a popular resort destination, and we’ll be making our very own train engines in any colours you want.

For this week, we’ll be collaborating with the Squamish Lil’wat Cultural Centre to make animal headbands!

Alta Lake became a popular fishing destination in 1914 and people caught many different kinds of fish.  Just like those early visitors, we’ll be making our own mini fishing rods and fish.  You’ll even be able to catch these fish with your rod, and fish can be designed however you want! 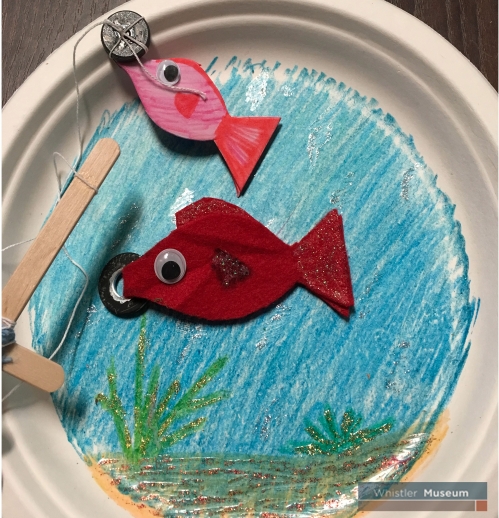 Before the train came to Whistler, it took 3 days to reach Alta lake.  The first day was spent on a steamboat from Vancouver to Squamish, and from there you would have to walk all the to Whistler, accompanied by a pack horse.  When fishing lodges began opening on Alta Lake, some lodges kept stables and would take guests on rides around the valley.  This week we’ll be making our very own horse, who can stand all by itself!  For ambitious crafters, we’ll also be making clothespin riders. 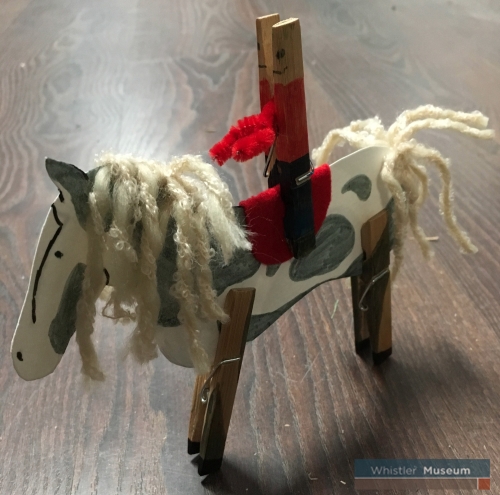 Sailing has been popular in Whistler for over 100 years and Alta Lake residents enjoyed taking all kids of boats out in the summer.  We’ll be making our own sailboats out of sponges, corks and paper.  Just like real boats, these really do float!

While Whistler is very well known for its winter sports, in the summer mountain biking takes over the town.  This week we’ll be making pipe-cleaner bikes and bikers!

Downhill skiing came to Whistler in the 1960s and has been wildly popular ever since.  Snowboarding was introduced to the hills in the 1980s, and now both sports are found on the mountains each winter.  We’ll be making our very own skiers and snowboarders this week, as we look forward to another snowy winter!

We look forward to seeing you on Wednesdays!

Our popular Kids Après is back for March Break!  This is a great chance to bring your youngsters by the museum to experience a bit of history with colouring, button-making, LEGO and more.  Entry is always by donation.  Children must be accompanied by an adult. 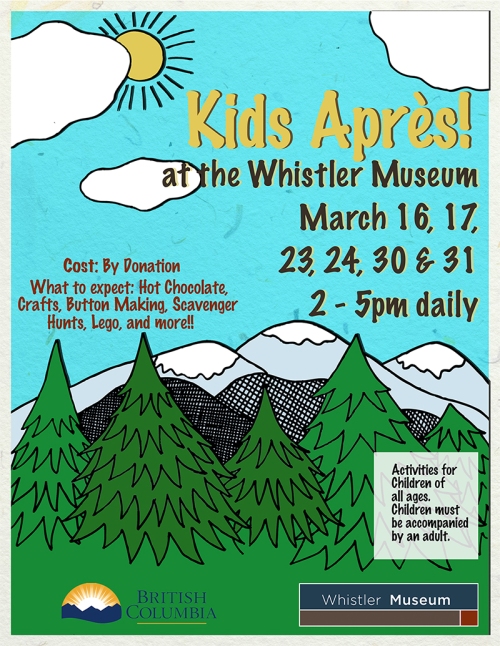 Our popular Kids Après is back for Family Day Weekend, February 16th to 18th from 3-6pm. This is a great chance to bring your youngsters by the museum to experience a bit of culture, colouring, button-making, LEGO, and more. Entry is always by donation. Children must be accompanied by an adult. 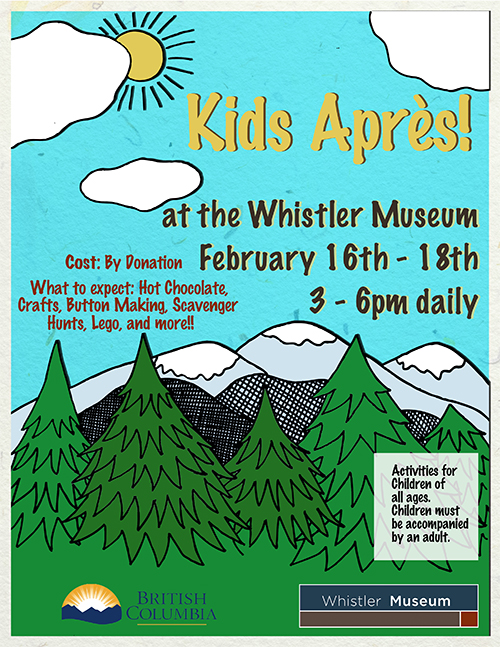 Crafts in the Park is starting up again!

We’re super excited to announce that Crafts in the Park are starting up again! Every  Thursday starting July 5th, the Whistler Museum and the Whistler Library will be hosting fun and free craft activities in Florence Petersen Park from 11 to 12 am. Kids of all ages can learn about Whistler’s history, enjoy a story, and get creative with one of our amazing crafts.

Our theme this year is “Whistler Through the Ages”. People have been coming to Whistler for over one hundred years in the pursuit of seasonal fun- from the first visitors to Rainbow Lodge in 1914, who came out to ride, fish, and sail, or the crowds that gathered in 2010 to cheer on the Olympic athletes. Our crafts this year are based on activities enjoyed in Whistler past and present.

The first settlers in Whistler came here to hunt and trap animals for food, and for their furs. We’ll  be making multimedia animal collages, using foam, felt, paper, magazines, tissue paper, fake fur, and more.  Whistler has an amazing variety of wildlife (bears, squirrels, and everything in between) so what animal will you make? 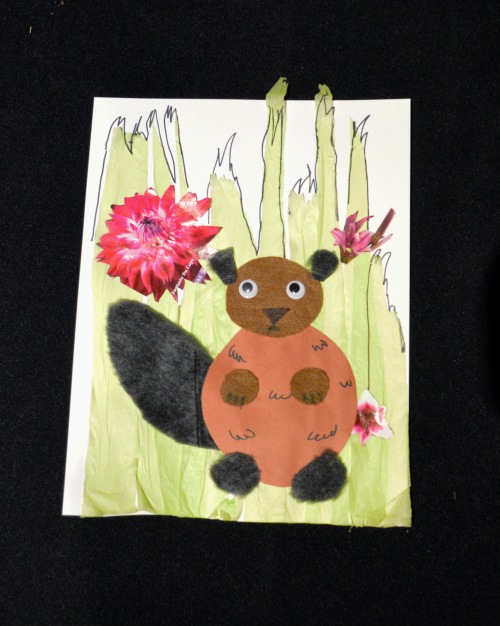 Alta Lake became a popular fishing destination in 1914. People caught fish of all kinds.  Just like those early tourists, we’ll be making our own mini fishing rods and fish. You’ll even be able to catch these fish with your rod. Design these fish however you want – rainbows are never a bad idea! For this craft, we’re collaborating with the Squamish Lil’wat Cultural Centre. We’ll learn about the relationships between animals and people in Pacific Northwest First Nations culture, and the ways we can identify with animals to understand the world around us. The children will make their own animal headdresses, and participate in a drumming song.

Sailing has been popular in Whistler since its early days and Alta Lake residents enjoyed taking all kinds of boats out in the summer. We’ll be making our own sailboats out of sponges, corks, and paper. Just like real boats, these really float, and you’ll even get a chance to try them out on the water. 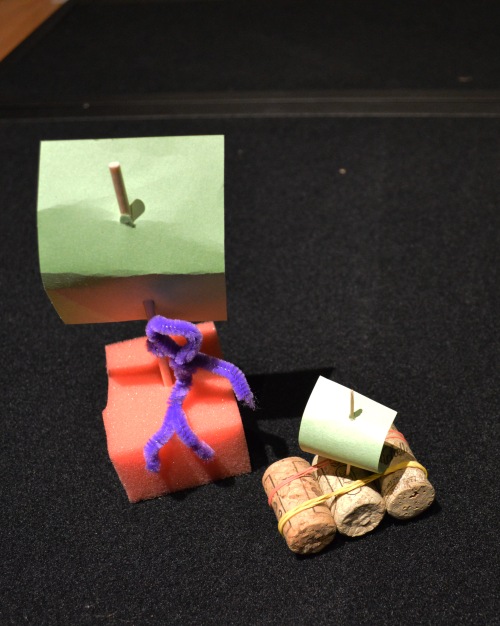 Rainbow Lodge at one time had a stable of 20 horses, and many visitors enjoyed trail rides and trail picnics during their stays. We’ll be making cut-out paper horses with moveable joints. Though you can’t take these horses out for a ride, they’re a fun, poseable homemade toy. And although Whistler’s never been home to any unicorns (as far as we know) you can go ahead and make one of those too. Whistler boasts several beautiful golf courses and this craft is a fun spin on one of Whistler’s favourite sports. We’ll be making kinetic golf ball paintings, using golf balls to roll the paint across the paper. These painting are fun to do and look even cooler.

Skiing began in Whistler in the early 1960s and has been wildly popular ever since. We’ll be making paper doll skiers and snowboarders, and using paper and fabric to dress them up warmly against Whistler’s freezing winters. Whistler was proud to host the Olympics in 2010 when Canada won gold on home turf for the first time. We will be making our own personalized Olympic medals using foam stamp printing and metallic glitter. Win gold in your favourite sport, or even make up your own!

So come out and join us at Crafts in the Park, every Thursday from 11 to 12 in Florence Petersen Park!

Kids Après at the Whistler Museum 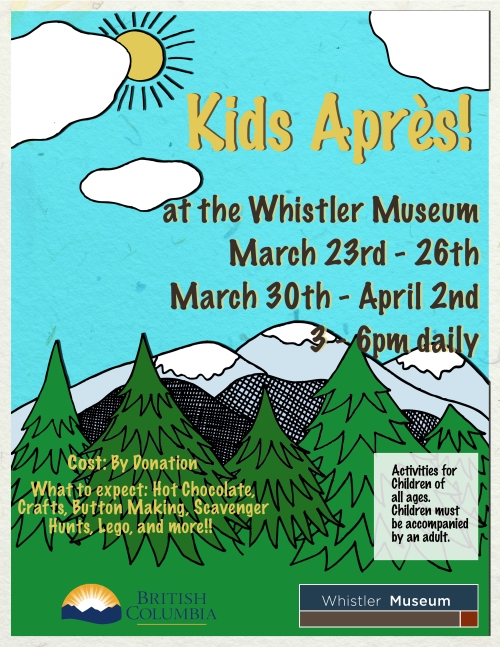 Kids Après is back at the Whistler Museum for March Break!  There will be LEGO building, a scavenger hunt, colouring and button making at the museum, as well as chance to explore the museum’s exhibits.  All ages are welcome; children must be accompanied by an adult.

It’s almost time to begin another summer of Crafts in the Park, run collaboratively by both Whistler Museum and the Whistler Public Library! This year, as Canada’s 150th, the theme will be, “A Journey Through Whistler’s History”. Each week will cover a different aspect of how Whistler came to be! The event runs from 11:00 -12:00, every Friday from July 7 – August 18. It will be held in Florence Petersen Park, just in behind the library. The hour will begin with a story and information activity under the story tree, followed by an example and explanation of the craft. It is a drop-in program for all children ages 4-12, with a chaperone present. 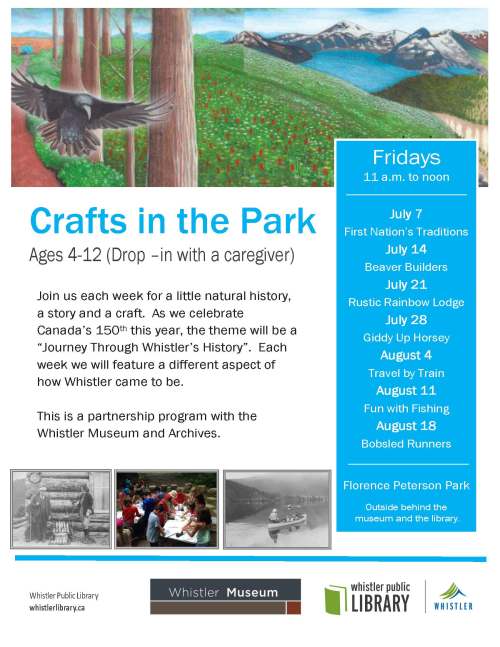 A journey through Whistler’s history could not begin without exploring what Whistler was like thousands of years ago. The Squamish and Lil’wat First Nations have been using Whistler as shared territory for longer than we can imagine. Along with these people, there were also animals, each with its own meaning and connection to the First Nations Culture. We will explore the connections of four animals in particular – Eagle, Bear, Wolf, and Hummingbird – before colouring and completing a headdress of one of the animals. This craft will be tied together with a drumming song, where the kids can be taught to dance like their chosen animal! There will also be a second craft this week for the older children, the slightly more difficult task of completing their very own dream catcher! 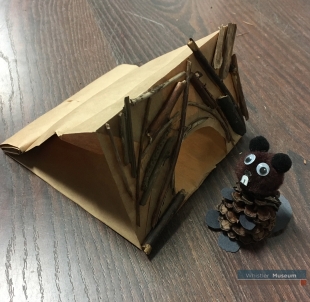 The valley itself has always had inhabitants, long before any pioneer settlers arrived. These pioneers were the animals of Whistler, many of which still live here to this day. One of Whistler’s pioneer animals was the beaver. In making the valley their home, beavers made dams along waterways. This changed the landscape for many years to come. Many of the rivers and streams in Whistler are still the way they are because of beavers. For the first craft, we will be creating both pinecone beavers and their paper bag dams to represent these early landscapes.

Whistler’s most well known original settlers were Myrtle and Alex Philip. They came to Whistler with the dream of opening a fishing lodge – and they did just that! The lodge they build was called Rainbow Lodge, which they opened to the public as a summer’s weekend getaway. This week we will be building our very own Rainbow Lodges. Kids will piece together colourful popsicle sticks right in the middle of their personally designed paper plate landscape. 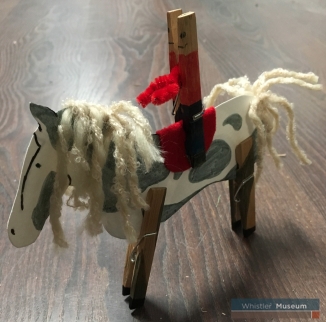 At the time of the earliest pioneers, getting to Whistler was not easy. In fact, it would take three day to get here from Vancouver. The first day was spent on a steamboat from Vancouver to Squamish, and from there you would have to walk all the way to Whistler, accompanied by a pack horse. To represent this journey, we will be making our very own horse, who can stand all by itself! We will also make a little clothespin rider, because even though the horses weren’t ridden to get to Whistler, once they arrived they sure were!

Travelling to Whistler became a lot easier in 1914 with the introduction of the railway. Instead of 3 days, the trek now took about 9 hours; still a lot more than we are used to in modern times. This railways had major influence on making Whistler the popular resort destination it is today. This craft will entail creating our very own popsicle stick railway, and a train to go along with it. 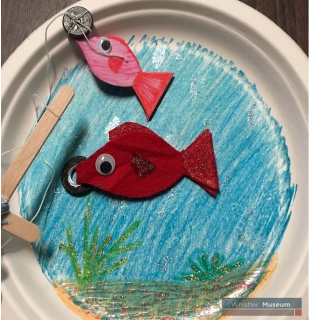 Long before Whistler was a winter skiing destination, people came here for the summertime. Whistler was known for horseback rides in the mountains, and swimming and fishing in the lakes. In fact, the iconic Rainbow Lodge was opened as a fishing lodge. People heard of the “lakes overflowing with fish”, and excitedly made their way to Whistler to stay at the lodge for the weekend. Many people loved it so much that they never left, and from there it grew and developed into this summer and winter town.

Join us for some summer-time fun!

Kids Après at the museum is back for Family Day this year!  Come by February 11 – 13 and 17 – 20 from 3 – 6pm for colouring, button-making, LEGO, hot chocolate and, of course, exploring our exhibits. 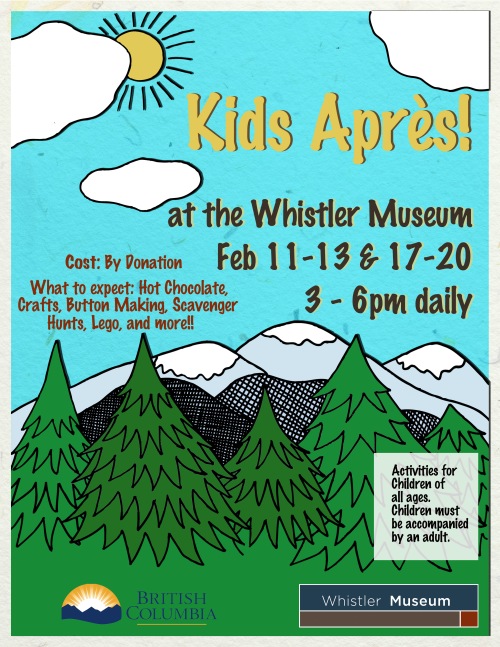 Entry to the museum is by donation.  Children must be accompanied by an adult.

We’ll be holdings Kids Après again every day during March Break (March 20 – 31), just in case you can’t make it out this month.