In the 1980s the Whistler Question began posing a question to three to six people and publishing their responses under “Whistler’s Answers” (not to be confused with the Whistler Answer).  Each week, we’ll be sharing one question and the answers given back in 1983.  Please note, all names/answers/occupations/neighbourhoods represent information given to the Question at the time of publishing and do not necessarily reflect the person today.

Some context for this week’s question: In November 1983, the RMOW was preparing to sign a lease with WLC Developments to lease two lots (Lot 50, also known as the VIP lot, near the Keg and Lot 59, the golf course parking lot) for use as parking lots. This sparked a conversation about the need to light the lots, as one councillor was concerned that in the dark the uneven surface of Lot 50 would be dangerous to pedestrians and others worried about safety and crime prevention. While Lot 59 did have some lights installed, Lot 50 was lit only by the lights from surroundings buildings. It was decided that the expense of installing lights was too great, especially as the lease contract allowed either party to cancel the lease with only 30 days notice (the most likely scenario seemed to be that a developer could buy one of the lots from WLC and WLC would then terminate the lease, meaning any installed lighting would have to be removed or abandoned).

Question: What do you think of lighting in the above-ground Village parking lots?

It should be pay parking. I would like to see it (VIP lot) paved, and the municipality should exploit this area of revenue. Bright lights are not a deterrent to crime. They should not make them bright, but have low-intensity lighting right across. The uniqueness of Whistler Village must be preserved.

I don’t think it’s adequate. This parking lot (VIP lot, beside Keg) needs a lot of work, and definitely needs to be lit up with a couple of really bright lights. I think people’s safety is more important than keeping the village lighting low-level. There are problems with vandalism and people stealing skis left on cars.

I really think it (VIP lot) needs light. Sure – use bright lights. Adequate illumination is not here, period. Add another buck to dinners in Whistler, that will pay for it. If the parking lot is well-lit and well laid-out it will be much more attractive. This lot is certainly patronized. If someone pays enough (as a Whistler patron) he should feel secure.

Snow Way to Get Around

While we may not know how much snow Whistler will get each winter, one thing that can be relied upon is that snow makes travelling within the valley more interesting.  Historically, snow and ice greatly affected people’s mobility through the winter months.

While the snow could slow down the train (one year the railway snowplow reportedly got stuck in the snow near Pemberton for two weeks), the frozen lakes provided the early residents with another way to travel around the valley. 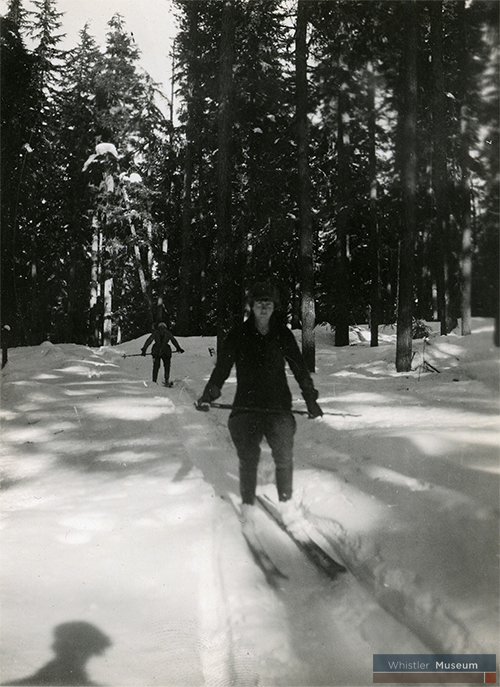 Myrtle Philip and Jean Tapley on their way to Tapley’s Farm over the snow. Philip Collection.

Bob and Florence Williamson moved to Alta Lake in 1930.  One year, Bob remembered, it snowed over two metres in just 48 hours at about -25°C.  According to him, “The snow was just like sugar.  When we got the roof shovelled off, the snow level was higher than the eaves and we had to shovel out the doors and windows.”  On occasion, the couple would skate to the end of Alta Lake, walk over to Green Lake, and skate over to visit with those living at the mill at Parkhurst.

By the late 1960s, when Trudy Alder arrived in the valley, the area had roads and automobiles weren’t such an uncommon sight.  In the winter, however, cars were still not an entirely reliable way to get around.  Trudy worked as a caretaker at the Tyrol Lodge on Alta Lake Road.  Because the road was not always cleared of snow, she would park the car at Alpine Village and walk home across Nita Lake.  To attend movie nights at the community hall, Trudy walked, often in the dark through deep snow (her first winter season at Alta Lake had 1.5 to 2.5 metres of snow in the valley) and accompanied by a pack of coyotes in the distance. 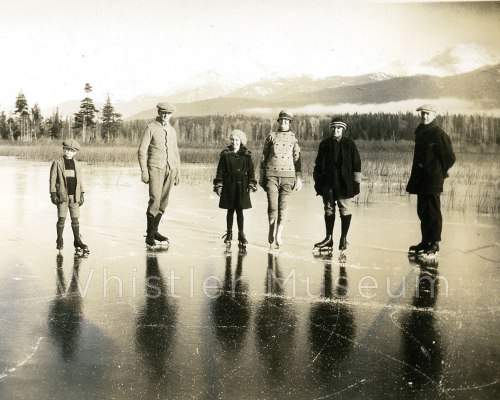 Ice skating across frozen Alta Lake was one way to get around the valley. Philip Collection.

For another group, the snow could be a bit of a burden.  Not too long after Whistler Mountain opened for skiing, Dorothy and Alex Bunbury purchased property almost a kilometre up the old Microwave Road (now known as Gondola Way) and built their ski cabin there.

The dirt road up to the cabin was used by BC Rail about once a week to access the microwave station.  In the winter, the Bunburys were fortunate if BC Rail’s trip had taken place on a Friday as that meant they got an easy walk up a packed-down road before their weekend of skiing.  If BC Rail hadn’t gone up recently, the skiers could be in for a long walk. 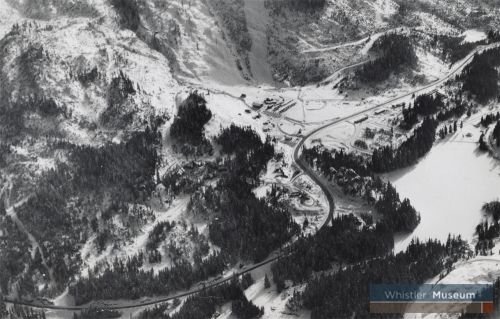 The development of Creekside and the surrounding areas as of 1970.   While there were roads, they weren’t alway plowed and some weren’t very drivable.  Whistler Mountain Collection.

On one memorable evening, the worst night Dorothy could remember, they arrived in Whistler to find 38 centimetres of powder with “an icy, breakable crust.”  Even snowshoes were no use on the icy surface.  Dorothy wrote, “There were four of us, all heavily burdened with packs, and we took turns breaking trait.  It took us about an hour and a half to walk into the cabin that night, and in the morning all awoke with bruised and painful shins.  That was one night when I would have gladly sold the whole mess for a train ride back to Vancouver.”

As we hope for more snow this season, consider your own favourite way of travelling through the cold, whether with skis, skates, snowshoes or very warm boots.