The story of Rainbow Lodge and the Philips may be the best known, but Rainbow Lodge was certainly not the only summer resort that opened on the shores of Alta Lake.

Dick Fairhurst opened Cypress Lodge, the Harrops had a popular tearoom and across the lake, around where Lakeside Park is located today, stood Hillcrest Lodge.

Guests were met at Alta Lake Station by Rainbow Lodge and rafted across the lake.

Jack Mansell first came to Rainbow Lodge in 1944 and, like Myrtle and Alex before him, was so impressed with the area that he began looking into purchasing the Patterson property across the lake.  Jack sold his three shoe repair stores in Vancouver and moved his wife Cis and their two sons Loyd and Doug in May 1945.

It was not the easiest move for the family.  Cis recalled living in a two-room shack, warming bricks in the oven for heat, and keeping the Christmas tree outside because it couldn’t fit in the shack.  For a family used to plumbing and electricity in the city, life at Alta Lake was a big change.

By January 1946 the entire family was involved in building the new lodge, which was ready to open that July.  The first guests the Mansells welcomed to Hillcrest Lodge were the Right Honourable Mr. Charlie Cockcroft, a politician from Alberta, his  wife and their party of family and friends.  Later guests would include Lady Oslow and Lady Wemise from England.  A reservation was even made by Bob Hope, though his wife became ill and they couldn’t come.

Hillcrest Lodge added cabins, dorms and other buildings as they grew.

Hillcrest grew quickly and had a total of 16 cabins open for the summer by 1947.  During the summer Jack and Cis employed University of British Columbia students and teachers to work in the lodge.  Like many employed in the hospitality industry, Jack and Cis worked hard during peak season.  As Cis put it, “Jack and I would say goodbye to each other in May and hello in October.  ‘Cause we didn’t live for ourselves, we lived for that guest.”

Apart from the usual summer activities such as swimming, hiking and boating, Hillcrest also offered their guests organized recreation.  Guests were expected at the main lodge in the evening for masquerade parties and square dancing (lessons included).

Current Hillcrest guests would meet arriving guests in costume. Hillcrest Lodge can be seen across the lake.

The Mansells also organized musical raft rides, kangaroo courts and mock weddings and took part in the Saturday night dances at the community hall.  Arriving guests were greeted at the train station by current guests in costumes and then rafted across the lake.  Though it wasn’t ideal for young families, as there was no beach and only deep swimming off the dock, a regular group of 30 or so “young kids” came to Hillcrest every year and other regulars would come for a week or two throughout the summer.

As they grew up, both Loyd and Doug fell in love with and married Hillcrest guests, Sharen and Barb.  When Jack and Cis retired in 1958 Doug and Barb took over the management of Hillcrest before selling it in 1965.  Eventually, like many other early buildings at Alta Lake, the lodge was burnt down as a fire practice in 1986.

While flipping through the 1979 October/November issue of the Whistler Answer, I came across a fascinating story titled “The Whistler Lodge (1973-74) or the Heyday of a Cabaret.”  I love the Whistler Answer for its bare all writing styles that would most definitely be deemed inappropriate in today’s local news. This story has all that quirkiness one expects from the paper, as the author, an old doorman at Whistler Lodge (also known as Hillcrest Lodge), gives his first-hand history of the place in as many outlandish adjectives as one can muster.

The article highlights the delight of the lodge, going as far as to describe it as “phantasmagorical”–a bold claim, the author admits. He attributes the liberal nature of the lodge to the managers, Rob and Jen Houseman, whose bureaucratic strategy was “don’t make any rules and none will get broken.” Have a read for yourself: 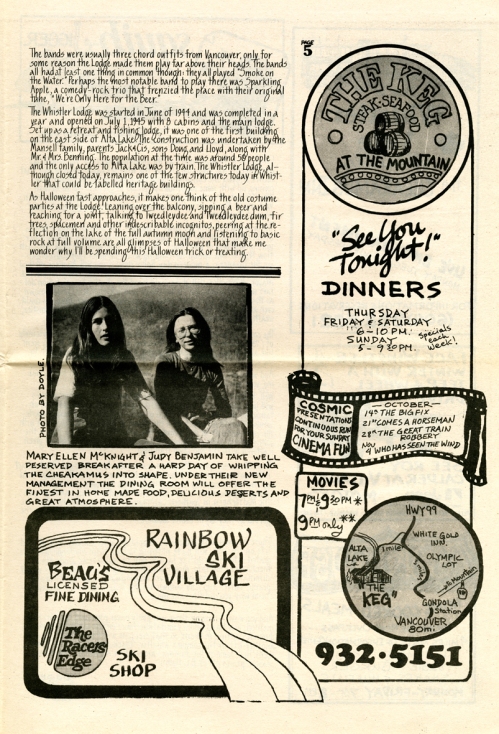 This fun recollection of Whistler Lodge inspired me to dig for some more facts about the place, leading me to the story of the Mansell family. Jack Mansell first came to Whistler (then Alta Lake) on a fishing trip in 1944. While staying at Rainbow Lodge, he got word of property for sale across the lake. Luck would have it that the owner of the land was a regular at Jack’s shoe repair shop in Vancouver. The two negotiated and that same year, Jack bought the property on Alta Lake.

Cis and Jack Mansell on the porch of Hillcrest, ca. 1950.

By May 1945 Jack had sold his three shoe repair stores and moved to Whistler with his family–wife, Cecile ‘Cis’ and sons Loyd and Doug. The family lived in a little cottage on the property before deciding to build a few cabins and develop the site as a fishing lodge. Interestingly enough, the place became a very successful tearoom; Myrtle Philip of Rainbow Lodge brought horseback riding groups round the lake to stop for refreshments at the Mansell property.

In January 1946 the family began building the main lodge, and it was complete by July of that same year. By 1947 Hillcrest Lodge was open for business with a total of sixteen units for rent. The lodge opened for guests on the May long weekend and closed after Thanksgiving in October. Guests would arrive at Alta Lake on the Pacific Great Eastern Railway and were often greeted by current guests… in costume! 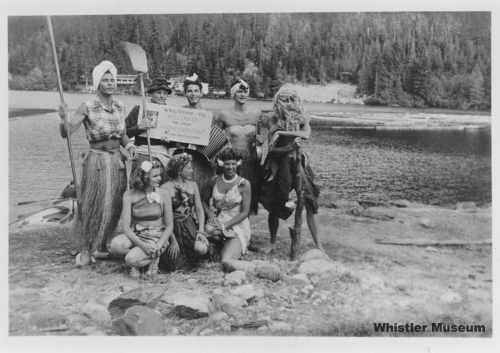 Jack and Cis eventually retired,  leaving management of the lodge to their children Doug and Barb. Doug and Barb managed the lodge from 1958 to 1965 before selling it to a group of Vancouver based businessmen led by Glen Mason. At this time, the name was changed to Mount Whistler Lodge. After operating for about ten years it closed due to lack of business. Thankfully, the stories live on.