This year marks a few important anniversaries for ski racing on Whistler Mountain: it has been 40 years since the ski hill almost hosted the World Cup in 1979 before it was cancelled due to weather and safety concerns, and it is 30 years since Rob Boyd became the first Canadian male to win a World Cup downhill event on Canadian soil.

Whistler Mountain also held other successful World Cup events in the 1980s and ’90s starting with a World Cup downhill in 1982.

By the last week of February 1982, Whistler had undergone some major changes since a World Cup was last attempted in 1979.  Blackcomb Mountain opened for skiing in 1980, giving Whistler Mountain nearby competition, and the first phase of Whistler Village construction was, for the most part, wrapped up.

The course for this World Cup downhill was changed as well.  Rather than follow the traditional route that used what is now known as Dave Murray Downhill ending in Creekside, the 1982 course ended in Whistler Village.

The Molson World Downhill came to Whistler, bringing thousands of spectators along with it.  Whistler Question Collection, 1982.

The new 3,810-metre course was expected to result in a winning time in the two-minutes-and-15-seconds range.  Racers began near the top of the Black and Orange Chairs and then headed down through the Double Trouble rollers, the Pony Trail Flats, Tokum Corner, the Elevator Shaft, across Crabapple Creek and to the finish line in view of the spectators waiting in the village.

There was more to Whistler’s 1982 World Cup than raceday on Saturday.  The opening ceremonies began the festivities on Wednesday, February 24 and included a parade of nations complete with flags and local dignitaries.  The following evening was Western Night.  The scheduled events included a display of logger sports such as axe-throwing and chainsaw demonstrations and a square-dancing demonstration for the national teams.  The Lil’wat Nation also hosted an outdoor salmon barbecue.  The Friday evening before the race was a more casual affair with a torchlight ski parade and fireworks display.

According to The Vancouver Sun, prior to Saturday the weather was “the most-discussed element of the whole affair.”  Days of fog and fresh snow leading up to the race meant great conditions for those skiing on the rest of Whistler Mountain but these conditions weren’t great for training runs, causing delays and cancelled practices.  Luckily, on Saturday and weather cooperated and, for the first time on Whistler, the World Cup downhill could go ahead.

At the awards ceremony after the race on Saturday, the cheers for Mueller were reported to be just as loud as those for the Crazy Canucks.  Mueller appeared to enjoy his second trip to Whistler, having first come to the valley one a five-week camping tour of Western Canada in the 1970s.  When speaking of the area’s hospitality, he told reporters that, “The people here are so friendly.  They come up to me and say, ‘Hi Pete,’ even if they don’t know me.  I would really like to come back here.”

Whistler’s 1982 World Cup was not an unqualified success to everyone.  According to Doug Sack in Whistler Magazine some teams “loathed the new course.”  It ended too slowly, passing over the flats of Lower Olympic, and one Austrian was even heard to say “I should have brought my cross-country skis with me.”

Whistler Mountain hosted more World Cup downhills after 1982, using the Dave Murray Downhill course.  If you’re interested in learning more about Whistler’s World Cups and what it takes to organize and pull off such an event, join us at the Whistler Museum for our next Speaker Series on Thursday, March 29 with guests Rob Boyd and Alex Kleinman.

Whistler’s first World Cup was set to be held on Whistler Mountain in 1979 and in the past four decades Whistler has gone on to host many high profile events, including Rob Boyd’s win in 1989.  We’ll be hearing about what went into putting on these races, what it was like to experience the multi-day events and how one run became a celebrated moment in our town’s history with guests including Boyd and Alex Kleinman.

Historically, in the month of March, Whistler would be hosting a World Cup Downhill event.  Up to 500 weasel workers would be working 12-hour days preparing the racecourse, installing safety nets and removing and moving snow throughout the course.  These volunteers were as important to the success of the event as the downhill racers themselves.

Thousands of ski-race fans would descend on Whistler, filling up hotels and making reservations a necessity to eat at many of the world-class restaurants in Whistler Village.  Pubs and bars would be full to capacity and the village would be enshrouded in a party-like atmosphere for close to two weeks.

Whistler attempted to host its first World Cup race on March 7, 1979.  Due to weather, the race was cancelled.  Three years later, in 1982, Whistler successfully hosted the World Cup Downhill event.  This race took place on a course on the north side of Whistler and its finish was in the newly completed Whistler Village.

Peter Müller of Switzerland finished in first place and two Crazy Canucks, Steve Podborski and Dave Irwin, finished second and third, respectively.  The 1982 race was capped off with a huge celebration because Podborski tied Müller for the overall Downhill World Cup title.

This would be the only race held on this course.  Racers complained the north side course was too flat and Müller even joked that he should bring his cross-country skis to the next one.  The downhill course was moved back to the south-side course and every other World Cup Downhill race held in Whistler was held on this course.  The racecourse was later renamed after Crazy Canuck Dave Murray, who succumbed to cancer in 1990.

Whistler hosted the World Cup Downhill event again in 1984 and two years later in 1986.  In 1989, Rob Boyd became the first Canadian to win a World Cup race on home soil.  If you ask many Whistlerites here at the time, they can tell you where they were when Boyd crossed the finish line.

Prior to the Olympic Games hosted in 2010, the last successful Downhill Men’s event was held in 1995.

From 1996 to 1998, the FIS moved the North American stops to earlier in the race season, leading to three consecutive cancellations of the Whistler stop on the World Cup circuit due to snow and weather conditions.

Will Whistler host another World Cup Downhill race?  Or will it be an event that only appears in Whistler’s past?

With the world watching, the mountain began to fall apart.

It was early March 1979, and heavy rains had turned a mid-winter snowpack already beset by persistent depth hoar into a sodden mess. The avalanche hazard went through the roof. This was a mountain manager’s nightmare, but as they say, “through adversity comes greatness.”

Patrol began doing what came naturally; they bombed everything that could move. As long-time Whistler pro patroller Roger McCarthy recalls, “in a normal day, that avalanche hazard in itself would be enough to give you grey hair. But we had a world cup to run…”

That’s right. Whistler was experiencing one of the most volatile avalanche cycles in memory, and we were just days away from hosting the resort’s first ever FIS World Cup downhill skiing race.

A few days before the race, some FIS officials insisted on riding the gondola up to check on conditions. While standing on the loading ramp at the bottom of red chair they witnessed Goat’s Gully shed its snow right to the ground. The avalanche even damaged one of the Orange Chair’s towers. Further downslope, a slide on Lower Insanity had left debris piles five feet high on Coach’s Corner. This was not the auspicious debut on the world stage that Whistler had planned for.

“In a normal day, that avalanche hazard in itself would be enough to give you grey hair. But we had a world cup to run…”

Still, mountain staff managed to clean up the mess and the forecast for race day was cold and clear. However, FIS officials deemed that safety requirements had not been met and the race could not run. As a new course with a relatively small budget, the safety infrastructure was not at the same level as some of the more established European courses, but some suspected politics as the true reason for the cancellation.

This was the era of the upstart Crazy Canucks trying to crack the European-dominated world of ski racing, and some feathers were being ruffled in the process. Regardless, with so much invested, it was going to be a major letdown for the organizers, the resort, the sponsors, and the tens of thousands of fans expected to be in attendance.

The night before the race, sensing it would be cancelled, Canadian ski racing legend Nancy Greene came up with an idea to salvage the event. They ran an exhibition Super G race, the first ever, instead. It wouldn’t count as a World Cup, but as local writer Janet Love Morrison described in her book The Crazy Canucks, it would entertain the crowds, satisfy the sponsors, and demonstrate the spirit and ingenuity of Whistler, and Canada as a whole.

The Crazy Canucks at the race. From left to right, Dave Irwin, Dave Murray, Unknown (can anyone help us out?), Steve Podborski, Ken Read.

And just in case anyone was wondering how the racers really felt about the cancellation over safety concerns, when it was Crazy Canuck Ken Read’s turn to race the exhibition course, he ignored the Super G gates and tucked the entire course at full speed, much to the crowd’s approval. 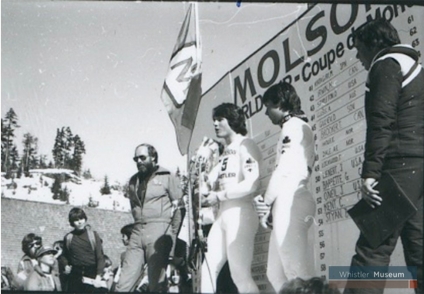 And so, in 1979, with the ski racing world focused on Whistler, nearly everything that could go wrong did. But somehow we still managed to get things right.