This Week In Photos: June 28

The district track meet in Squamish got lucky with its weather.

Someone was practicing their glass breaking at the liquor store last week. RCMP are investigating.

A new BBQ ready to be installed at Alta Lake Wayside Park.

Sarah, Wendy and Sid try to decide what to do with that nosy photographer during a party Friday.

Arnold Palmer chats with the crowd towards the close of the official ceremony at the Whistler Golf Course. 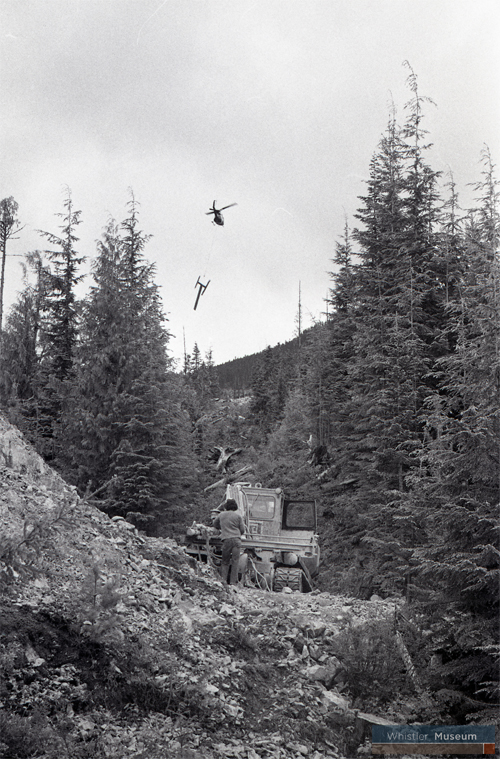 A chopper spins and dips above Whistler benchlands as the lowest lift of the three chair north face lift system is installed from top down.

Phase II Parcel 16 takes shape with Whistler Chairlift N-14 rising through the trees on the left.

With a landscaped area, seed for lawn and new curbing in, Sunshine Place takes on a new look. Paving will add a finishing touch and should be completed by the end of July. 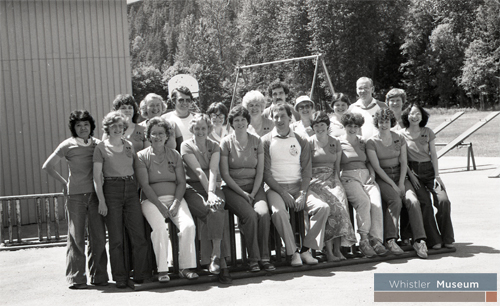 Not to be outdone by the Myrtle Philip staff who were in last week’s paper, the staff from Signal Hill Elementary School in Pemberton pose for The Question. 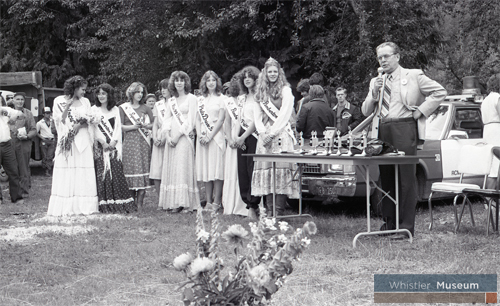 Contestants for the Miss Pemberton Contest look on as BC Minister of Highways, Alex Fraser, explains the provincial grant for Pemberton Airport. 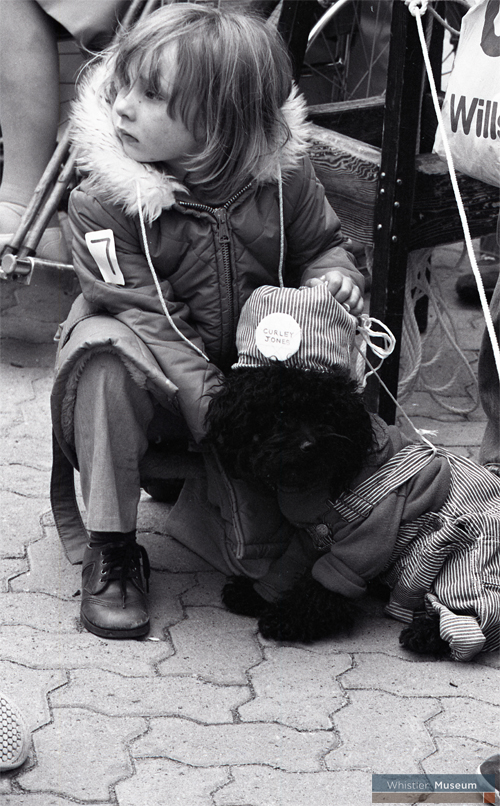 Madeline Domries and her pal Curly Jones wait with great expectations for their fourth prize at Dog Days in the Village Square. 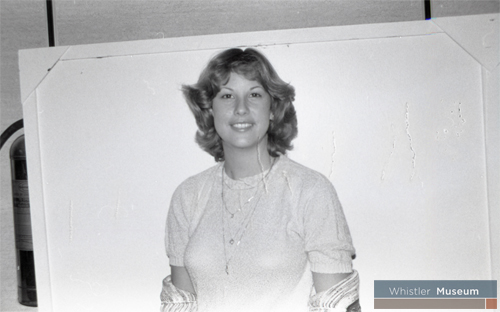 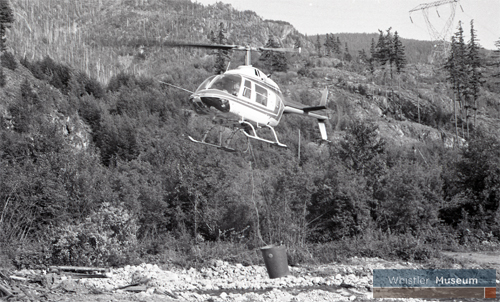 A chopper heads out with a bucket of water to help squelch the recent forest fire in Cheakamus.

Jan Naylor displays some of the strawberries now ready for picking at the Naylor Berry Farm 3 km north of Pemberton.

Stubborn as a mule! In spite of the efforts of the ‘D’Arcy Prospectors’ this donkey refused to cross the BCR tracks during the Pemberton Parade in celebration of Canada week.

New stop signs often get ignored so the municipality placed reminders in front of this sign on the intersection of Rainbow, Matterhorn and Camino Drive. 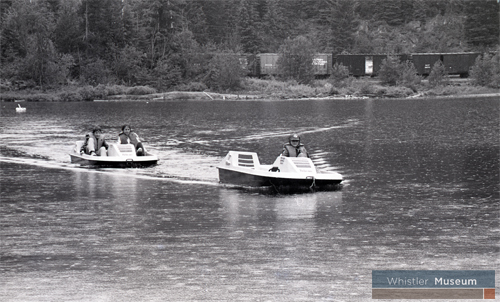 Not even the rain stopped these kids from a practice paddle on Alta Lake for the Whistler Country Guides Kids Races. Bad weather postponed the races to Saturday, July 3 at 9:30 at Wayside Park. 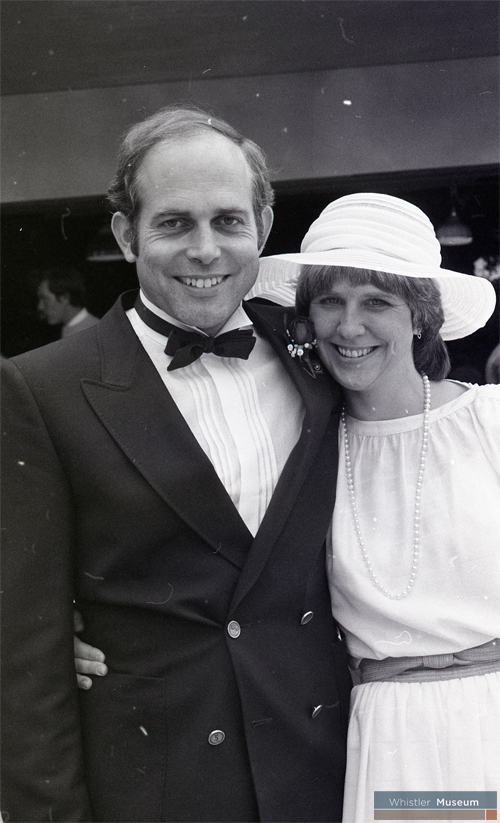 Long-time Whistler residents Paul Mathews and Margot Sutcliffe shared a smile on their wedding day Saturday, June 25 at Whistler. Over 150 guests joined the celebration at the Sundial Restaurant.

This house has found its new home on the streets of Whistler. 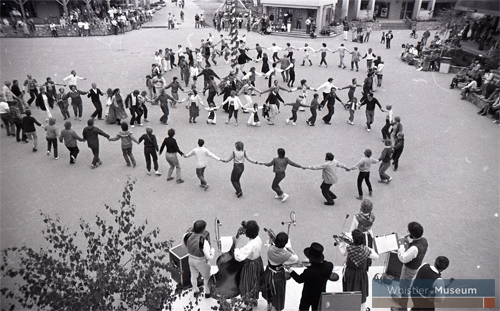 Round and round and round they danced in celebration of summer. Whistler’s first Midsummer Fest, June 25-26, caught the imagination of hundreds, whether they were Scandinavian or not. 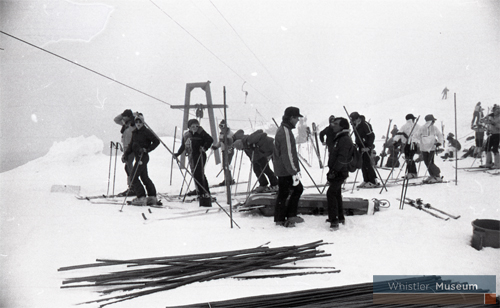 Dave Murray and Floyd Wilkie have a pre-session consultation at the base of the t-bar.

The Tapley’s Pub softball team poses for a group photo.

Ken Harrop of Singapore Airlines showed his staff and took to the air Saturday during the obstacle race – part one of the three-part Battle of the Travel Stars. Thirty-seven travel agents took part in the two-day fun-filled FAM tour of Whistler.

Scandinavian dancers and musicians filled the village over the weekend for traditional Midsummer festivities. Saturday and Sunday afternoon dancers in garb of the old country whirled about Village Square to folk tunes. 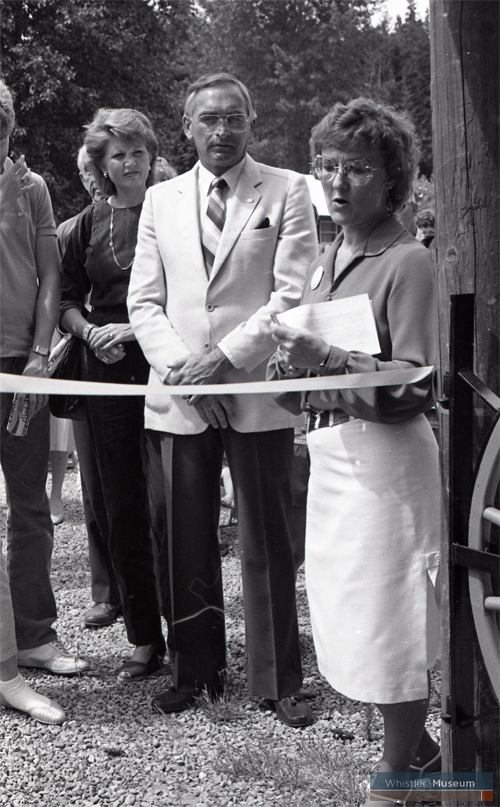 Pemberton Mayor Shirley Henry officially opened the Pemberton Museum Saturday with help from West Vancouver-Howe Sound MLA John Reynolds and his wife Yvonne. Museum curator Margaret Fougberg says most of the collection, which features artifacts dating from the 1860s until the 1950s, was donated by townspeople. The museum building itself has a long history. It was built around 1895 and has been moved twice. It’s permanent location is on Prospect Street in Pemberton.

Whistler Mountains’ miniature golf course at the gondola opened last week and immediately attracted a steady following. The 18-hole course costs $2 a round for adults, $1 for children and is open all day.

Posted in From the Archives, Recreation, Ski-Town stories, Skiing, This Week in Photos, Whistler Blackcomb

While looking through our artifact collection this summer we stumbled upon a familiar item: an Okanagan Helicopters baseball cap in the trademark orange and blue. We recognized the cap’s distinctive hummingbird logo because a helicopter enthusiast we know [Editor’s note: Jaimie’s father] has the exact same hat, but we were unsure why this hat would be part of our artifact collection. 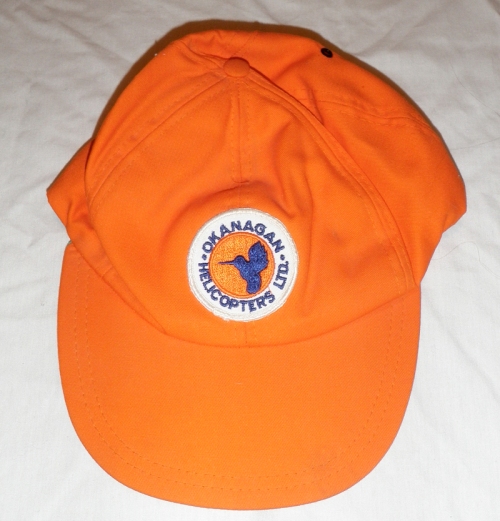 The hat in all its orange glory.

Heli-skiing in the Whistler area has long been a popular activity, since the choppers provide access to the glaciers and backcountry areas for skiers looking for prime powder skiing. Pamphlets from the museum’s research files reveal that a bevy of helicopter companies were involved in providing heli-skiing tours, including Canadian Helicopters Ltd (one of the companies which Okanagan Helicopters became when it was restructured in later years, who also had a hummingbird logo).

Franz Wilhelmsen and Willy Shaeffler with an OK Heli, 1960s.

Issues of the Garibaldi Whistler News going back as far as 1970 also prove that Okanagan Helicopters was the one of, if not the, first company offering heli-skiing services in the Whistler area. The company was allied with skiing superstar Jim McConkey, who was the Director of the Garibaldi Ski School at the time and acted as the guide on heli-skiing trips. 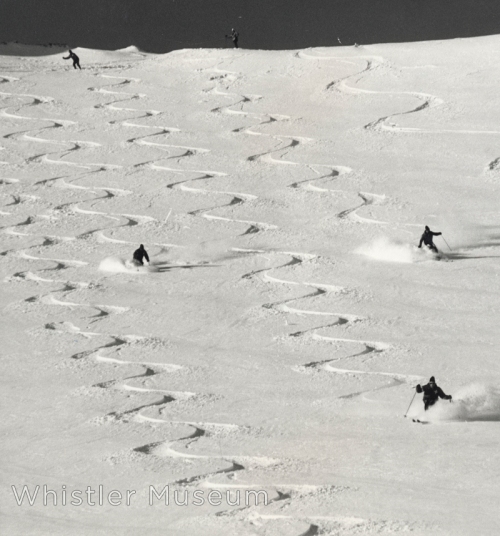 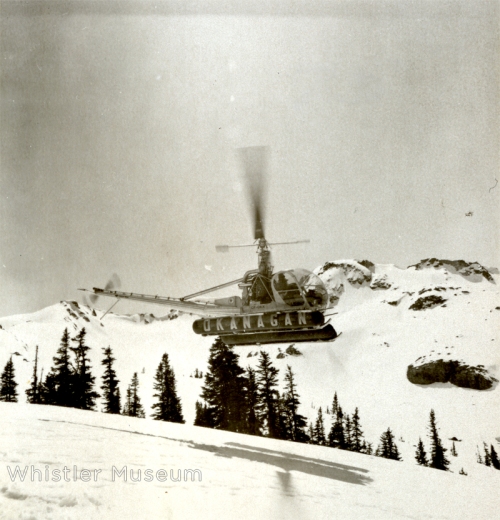 Once the decision was made to make the resort a reality, Okanagan Helicopters was called upon again. Construction of the lift towers was done before ground transportation up the mountain was feasible, and helicopters were thus  chosen the construction vehicle of choice. When the Garibaldi Olympic Development Association (GODA for short) was formed to promote Whistler Mountain as a potential host for the 1966 Olympics Glen McPherson, the president of Okanagan Helicopters, was on the committee due to the company’s important role in the construction of the resort.

The hat itself is most likely from the late 1970s or early 1980s – before Okanagan Helicopters became Canadian Helicopters Ltd and CHC in 1987- but the legacy of how it came to be in the collection goes back almost 20 years to the very beginning of the Whistler-Blackcomb resort.

Posted in From the Archives, Skiing, Whistler Blackcomb