The Woods at Alta Lake

The Woods family moved to Alta Lake around 1926 and worked in the area, both for the railway and in the logging industry, until the 1940s. Fred Woods was born in the Isle of Man and immigrated to Canada after a time in the army. He worked on the railroad in Broadview, Saskatchewan where he met and married Elizabeth. Their first child, Helen, was born in Broadview in 1921 and a couple of years later the family moved to Port Coquiltam, where Fred continued to work on the railroad. While there Fred and Elizabeth had two sons, Jack and Pat. Fred then took a job as a section foreman for the PGE Railway and the entire family moved to Alta Lake.

After a few years, Fred lost his job with the PGE and the family moved out of the company house. After living for a time in a much smaller house, the family was able to rent a property from Jack Findlay, who charged them only the cost of the property taxes. The property included a house, barn, hayfield, and garden and was located across the creek from the Tapley’s farm. Fred began working for the logging operation of B.C. Keeley of Parkhurst during the summers and clearing trails and bridges as relief work in the winters.

The family kept a cow, horse, chickens, and, at times, a pig and grew their own vegetables. In the summer the children would pick berries that Elizabeth would use to make jam. She also canned meat from their animals. When the logging camp closed at the end of the summer Fred would order groceries such as flour and sugar wholesale through the cookhouse to last through the winter. Vegetables were stored in the roothouse and the children would keep the path from the house clear of snow.

Helen, Pat, Jack and later their younger brother Kenneth went to the Alta Lake School, though Pat remembered some days when snow prevented them from attending. As they got older they also began working outside of their home. When Jack was fifteen and Pat fourteen they spent a summer working in the sawmill at Lost Lost (after a fire at Parkhurst in 1938, logging operations were temporarily moved to Lost Lake before returning to Green Lake). Their employment ended abruptly when Jack lost all the fingers on his right hand in a workplace accident. According to Pat, it took years for Jack to receive compensation, as he was supposed to be sixteen before working in the mill.

Though the family worked hard during their years at Alta Lake, both Pat and Helen had fond memories of living in the area. Elizabeth loved music and taught her children to play violin and guitar. She played accordion and the family would perform at community dances. They also remembered the kindness of various “bachelors” who lived at Alta Lake, such as Bill Bailiff and Ed Droll, who would visit with their father and sometimes give the children carrots from their gardens on their way to school.

In the early 1940s Fred Woods joined the Canadian army and the family, apart from Helen who had left home and lived in Squamish, moved to North Vancouver. In later years, members of the Woods family returned as visitors to Alta Lake and then Whistler, though they never forgot the years they spent living and working in the area.

The Alta Lake School Gazette: News Before The Question

The Whistler Question, published from 1976 to the beginning of 2018, was Whistler’s first official newspaper.  The municipality only came into being in September 1975 and Pique wouldn’t begin publishing until 1994.  Well before the first edition of The Question, however, the valley’s first newspaper was put together by a small group of students at the Alta Lake School.

The Alta Lake School first opened in the early 1930s with only 10 students spread across Grades 1 to 9.  In 1939 some of the older students established the Alta Lake School Club and the Club then sponsored The Alta Lake School Gazette.  The Gazette ran from February 11 until June 5.  The paper’s first editor, Bob Jardine, donated an entire run to the archives and the six editions give a valuable insight into the everyday happenings of the small Alta Lake community.

The staff list of The Gazette includes many names that are familiar from stories of Alta Lake’s history.  Bob Jardine and his brother Tom Neiland both acted as editors for the paper and Jack, Helen and George Woods were all involved in reporting.  Helen also held the position of the secretary for the organization. 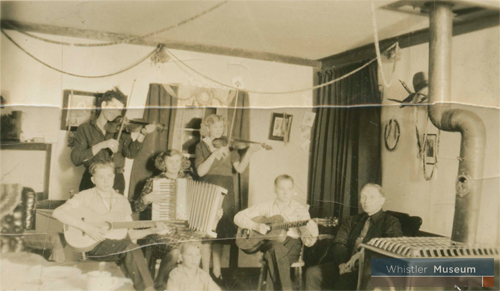 The Woods family band played at community events, such as dances and fundraisers, held in the school.

The first editorial of The Gazette stated the paper’s purpose: “to give a current account of happenings each month as seen by its editor and his staff, it shall try to tell the facts and only the facts.”  The short editorial also thanked those who built the Alta Lake School for allowing the students to start this paper.

Following the editorial of each edition is “Local News Of Interest,” an interesting combination of observations, opinions and local gossip (which may not have been entirely in keeping with the paper’s goal of reporting “only the facts”).  The “Local News” reports on the activities of Alta Lake residents and visitors, whether it is something everyday, such as Mrs. Harrop holding a tea which school teacher Miss Bedford attended, or something a little out of the ordinary, such as William “Mac” MacDermott’s first ride in an airplane in May 1939.

Alta Lake around the 1930s was not the easiest place to live.  There was no real road or reliable electricity, and families worked hard to make a living in logging and other industries.  What could be thought of as hardships are reported in The Gazette as part of daily life in a small, somewhat remote, community.  For example, on May 28 Bob Jardine and his mother Lizzie Neiland left their home at 11 am to walk the 40 kilometres to Cheekeye, where they stopped for the night.  Mrs. Neiland had received word of the death of her brother and, having missed the Saturday train, was resorting to “shanks mare” (her own legs) to get to Vancouver.

Over its six editions The Gazette grew to include letters to the editor, boxing news and even an essay on the state of the Canadian Navy and unemployment in British Columbia alongside the results of the latest Cribbage Tournament.

The Alta Lake School Gazette may have lasted only a few months but it provides a snapshot of the daily lives of the Alta Lake residents.  Its “Local News Of Interest” also supports the idea that in a small community, your neighbours always know what you’re up to.