The last days of the season are a time of celebration, a time to look back on the season’s achievements: epic lines, friendships forged, late nights, and metres of pow slayed. Whether it’s squeaking in a few more slushy turns, perfecting a goggle tan, or raising a glass with friends, almost everyone has some kind of ritual about hanging up their planks for the season.

For some, the end of the season simply means a quiet transition, putting a board away and swapping it for a bike. For others, a migration to the southern hemisphere begins, where the season will start all over again.

For many Whistlerites, participation in ‘Gaper Day’ marks the end of a season well shredded. Gaper Day encourages general ski hill tomfoolery, and has been around in some form since 1996. Formerly ‘Ski in Jeans Day’, the last day of the season celebration came to be called Gaper Day in order to allow people to unleash their stylistic creativity. Not just jeans, but retro ski outfits and costumes are encouraged. As Gaper Day founder Jamie Bond put it,  “you can do whatever the hell you want”, it’s basically a way for people to “[get] silly and keep it real all day”.

Since skiing in Whistler first opened in 1966, the warm whether and sunny days of spring have been accepted with open arms and bare skin (in varying degrees). In 1969, Jane Ferris was at the forefront of the trend of stripping down to celebrate spring in style (pictured). 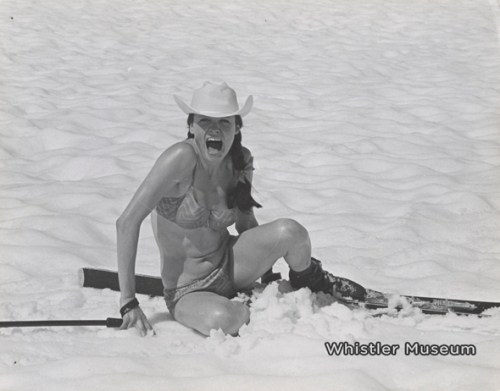 Life’s a mountain and a beach! Jane Ferris stripping down for a day of spring skiing in 1969. Photo by Selwyn Pullan.

So whether your tradition is to dress up, undress, or eke out those last few turns, know that you, in your own way, are contributing to the rich tapestry of Whistler’s spring skiing history.

Raise a glass to another season well spent and the imminent arrival of summer!