Searching for Answers at the Whistler Museum

Working at the museum, you never know who is going to walk through the door or what questions you’re going to be asked on any given day.

Just this past week we had a couple from the UK in search of information on a great uncle who had come to Alta Lake in the 1950s and built a summer cottage.  They were hoping to be able to determine where the cottage had been built and see what the area looked like today.  Given the names of the great uncle and the cottage, we were able to answer all of their questions about Worlebury Lodge, largely thanks to a history of Alta Lake Road compiled by Florence Petersen, Gay Cluer and Karen Overgaard. 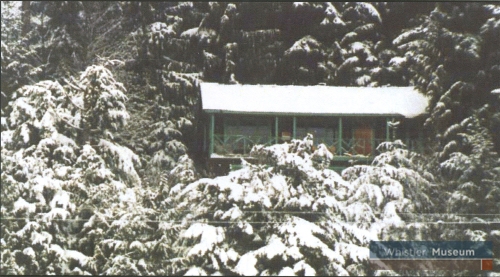 Worlebury Lodge was built by Maurice and Muriel Burge, the great uncle in question and his wife.  Maurice was an accountant for the Vancouver School Board and Muriel was a nurse.  In 1956 the couple and their two sons visited Cypress Lodge for a week in the summer and enjoyed it so much they purchased their own lot.  The cottage was named Worlebury Lodge after the area in England Maurice came from.

Next door to Worlebury Lodge was Woodbine Cottage, the summer cottage of Ray and Jean Dove.  Friends of Maurice and Muriel, the Doves had been convinced to buy a lot on Alta Lake by the glowing reports that followed the Burges’ visit to Cypress Lodge.  Maurice helped with the construction of Woodbine Cottage and both families spent many summers enjoying life at Alta Lake. 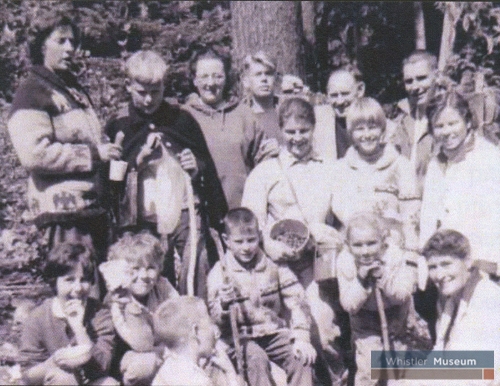 A hike to Rainbow Falls including Maurice Burge (2nd from right in the back) and Muriel Burge in the front row. Photo: Dove

Worlebury Lodge was eventually rented out and then sold and replaced with a more modern house, but we were able to show the visiting couple where the lodge would have been located and they planned to head out to Alta Lake Road to see what the view from Worlebury Lodge would have been.  They had brought photos of the property that Maurice Burge had sent to his sister and a brochure for Rainbow Lodge under the management of the Greenwoods, which we were excited to see.

Not all inquiries we get at the museum are as easily answered as the search for Worldbury Lodge; some require deeper research and there are also some whose answers have been lost as time passes undocumented.  We also occasionally encounter people with questions or inquiries unrelated to the history of Whistler and the surrounding area.  We do our best to answer these questions or direct the inquirer to someone more knowledgeable in that area, such as when a man called form the eastern States to inquire whether the museum was interested in buying a scale model he had made.

This man had hand-crafted a miniature model of Buffalo Bill’s stagecoach as it looked on his return to Kansas and was hoping to contribute it to a museum’s exhibit on Buffalo Bill.  Our best guess is that when searching for Buffalo Bill on the internet he came upon Buffalo Bills, the bar, and assumed there was a connection between the man and Whistler.

Though there is no documentation to suggest that Buffalo Bill ever passed through the Whistler valley, he did have Canadian connections and we were able to direct this man to organizations that would be more likely to be able to help him in his quest.

Next time you’ve got a question about Whistler’s history, think about visiting us at the Whistler Museum – we might just have the answer you’re looking for.