Approaching the Last This Week In Photos

Every week for the past year we’ve shared a selection of photographs and captions from The Whistler Question each Thursday (you can find them all here).  The collection (1978 – 1985) is catalogued by week, which has been very helpful.  With only two Thursdays left in 2018, we’ve not only created the last posts of This Week In Photos but have now taken a look through every digitized photo in the Question Collection.

This will be one of the photos in our last This Week In Photos post on December 27.  Whistler Question Collection, 1982.

The photos in the collection cover a wide variety of happenings in a quickly growing town, ranging from ice stock sliding in January 1978 to a Brownies dinner in February 1985 (with quite a few photos of publisher Paul Burrow’s dog Simba in between).  The collection includes many significant events in Whistler’s history: the construction of Whistler Village, the building of lifts on Blackcomb Mountain, multiple years of the Great Snow, Earth, Water Race, and the openings of many Whistler businesses.  Some, such as Club 10 and Peter’s Underground, have been replaced, while others, including Tapley’s Pub and Whistler Hardware, still occupy the same space they originally tenanted in the 1980s.

Simba poses with Paul and Jane Burrows.  The collection includes photos of Simba from the time he was a puppy.  Whistler Question Collection, 1984.

While the captions originally printed in the paper provide context for many of the images, photos that weren’t published have little or no information about who is pictured or what is going on.  Even with a caption, for a few photos we still needed to look at the accompanying story in the original publication of the photos in The Whistler Question.

A series of photos found in the Week of January [16?], 1981 certainly raised a few questions when first stumbled upon.  One of the photos shows a large pile of boxes, tied together and set aflame with an ambulance waiting in the background.  As the photos progress, a leg can be seen emerging from the growing flames and then a person is extinguished and bandaged.  From the captions we learned that the person running through flaming boxes had the last name Bentham, but we still didn’t know why or where he was running.

The explanation for this literal stunt can be found in the January 15, 1981 edition of The Whistler Question.  John Bentham, a stuntman working at the Mountain House Cabaret, organized the stunt, partly to promote a stunt company he was planning to open in BC to serve the growing film industry.  Media and photographers were invited and and, because he had all his permits in order, an ambulance and fire truck were on hand in case of any emergency.

Bursting through the blaze as crewmen with fire extinguishers head towards Bentham.  Whistler Question Collection, 1981.

The stunt involved Bentham running through a tunnel of flaming “diesoline” soaked cardboard boxes 10.6 m long and 2 m high.  He then burst through a wall of boxes at the end, landing in a roll on the old mattresses set out at the end. 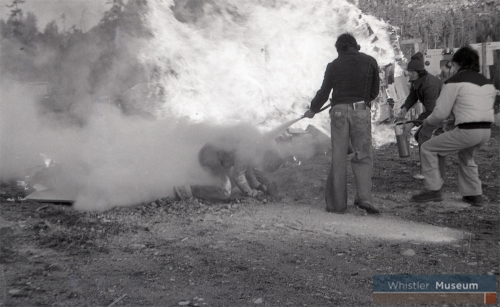 Though one photo shows Bentham being hosed down with multiple fire extinguishers, he reportedly came out of the wall “not aflame” and undamaged.

The Mountain House hosted a “small get together” to celebrate the successful stunt.  Readers were told to drop by the Mountain House any evening to get a first hand account from John Bentham himself.

In the aftermath, Bentham is bandaged by his brother Harry.  Whistler Question Collection, 1981.

There are over 30,000 images included in the collection and each of our posts has featured only a small selection.  If you’re looking to fill a few spare hours (or days) why not take a look through Whistler’s past here.  You never know what, or who, you’ll find.

Posted in From the Archives, Museum Musings, This Week in Photos