Speaker Series – “Celebrity Athletes and the Growth of Modern Skiing”

A few weeks ago we profiled Stephanie Sloan, freestyle superstar and featured presenter at our upcoming Speaker Series event “Celebrity Athletes and the Growth of Modern Skiing.” The event will explore how professional skiers have harnessed their top-level skills and name-recognition to introduce cutting edge techniques to skiers. This phenomenon has long been a major driving force for the sport, otherwise, we would all still be doing telemarks and stem christies.

Here in Whistler, the first high-profile skier to hitch his name and skills to the new resort was Austrian ski-racing star Toni Sailer, who began operating summer ski camps on the Whistler Glacier in 1967. The following year big-mountain ski pioneer Jim McConkey was hired to run the Whistler Mountain ski school.

Before (and during) his time in Whistler, McConkey made a name for himself as an early ski film star. Here he is enjoying some of Alta, Utah’s famous champagne pow.

Then in 1970, fresh off her historic gold medal performance at the 1968 Grenoble Olympics, Nancy Greene and her husband Al Raine built a cabin in Whistler and became heavily involved in teaching skiing, promoting the sport, and developing the resort.

The following image shows the coaching staff at the 1969 Toni Sailer summer camp. Sailer is back row, 2nd from right, and Nancy Greene is front row, 2nd from left. Almost all the other coaches were World Cup level racers. 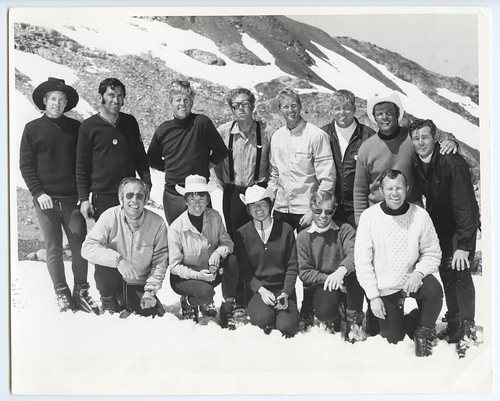 This trifecta of early ski stars set the standard, but there have been countless others over the years. One who has most skillfully made the transition from competition to coaching is John Smart. A moguls specialist John was a two-time Olympian, 13-time World Cup medallist, 3 time Canadian Champion and World Pro Champion during a career spanning from 1987-1996.

In 1992 he founded Momentum Ski Camps which focused on training the next generation of freestyle ski champions every summer on Blackcomb’s Horstman Glacier. Today, Momentum is bigger than ever, having fully embraced the Freeski revolution and hosting some of the sport’s biggest names as their coaches each summer.

But some might say the real highlight of John’s career came in 2013 when he taught renowned Canadian ranter Rick Mercer how to jump onto an inflatable crash pad.

Rounding out the panel discussion will be Rob McSkimming. Rob brings several decades of experience in the ski industry to the table, including a stint as a coach at Dave Murray Summer Ski Camps in the 1980s.

Rob went on to become the snow school’s general manager for several years before moving onto his current position with Whistler-Blackcomb as VP-Business Development.  Clearly, Rob has a wealth of knowledge that will complement John and Stephanie’s recollections on the panel.

We hope you can join us on Sunday February 21st for “Celebrity Athletes and the Growth of Modern Skiing”! The event is being held in conjunction with International Ski History Day, being organized by the International Ski History Association who will have a delegation in attendance. They’re also offering a full-day ski package, concluding at our Speaker Series, that is incredible value. Details available through the above hyperlink.

When: Sunday February 21st; Doors at 6pm, show 7pm-9pm
Where: Whistler Museum (4333 Main Street, beside the Library)
Who: Everyone!
Cost: $10 regular price, $5 for museum members and W-B Club Shred.