The Early Days of Alex & Myrtle

Working at the Whistler Museum we sometimes forget that not everyone has heard of the story of Rainbow Lodge and its owners Alex and Myrtle Philip.  Every so often we’ll be reminded, sometimes by a student on a field trip fascinated to learn that their school was named after a real person or a visitor to Rainbow Park who wants to know why there are old buildings in the bushes.

The story of Alex and Myrtle Philip began far away from Alta Lake, on the other site of the continent in Maine.

The Philip family emigrated to Maine from Scotland when Alex was just a baby.  Some members of the family later traveled and worked in British Columbia and as a young man Alex joined his father to work on the west coast.

In 1906 Myrtle was fifteen, attending school in Maine prior to becoming a teacher, and boarding at the Philip family house.  The two met when Alex returned home to visit his mother.  As Myrtle described it, “I came home from school that day for lunch, dashed into the front door and threw my sweater on the stair rail and dashed through to the kitchen where we were to have our lunch and I ran plumb into his arms in the little hallway… And that was it.”  For four years the pair wrote to each other (Myrtle called it “courtship by correspondence”) and were married in Oregon in 1910 before moving to Vancouver.

Alex and Myrtle Philip, far more dressed up than they tended to be at Alta Lake. Philip Collection.

In Vancouver Alex met John Millar, who was then living near Alta Lake in a cabin on the Pemberton Trail.  Though described as a “funny looking little fellow,” Millar made such an impression on the Philips that the next summer they made the journey up to visit him. (You may have seen John Millar as part of the museum’s parade float for Canada Day yesterday!)

In the archives we have a recording of Myrtle’s account of their first trip to Alta Lake.  After arriving at Squamish by boat they took the stagecoach to Brackendale where they stayed the night at the Bracken Arms, “a quaint hotel.”  They had arranged for the use of a packhorse to carry their supplies and, after getting some help to attach the pack to the horse, they started on their way up the Pemberton Trail.

Myrtle & Alex Philip coming up the Pemberton Trail on their first visit to Alta Lake,August 1911.

By the time they reached Millar’s cabin two days later Myrtle had become proficient in attaching the pack but both were happy to reach the relative comfort of Millar’s hospitality.  His accommodations may have been described as “three or four old shacks” but his cooking more than made up for the structures.  Myrtle, who prided herself on her pies, claimed he made “pastry that would just melt in your mouth and bread that was just out of this world.”  (Millar has also been mentioned by others for his muskrat stew and steller’s jay pie.)

This trip also featured Myrtle’s first time fly fishing.  Using old rafts they found at the lake (also described as “three or four poles tied together with any old thing”) Myrtle and Alex ventured out on Alta Lake.  Thinking that using two flies might mean catching two fish, Myrtle put two flies on her line and, unexpectedly, caught two fish.  Fortunately the fish were small, as Myrtle claimed that “I got so excited that I nearly fell off the raft.”

The Philips returned for another visit and in 1913 they purchased property along Alta Lake from Charlie Chandler.  With help from Myrtle’s father Sewall Tapley and her brothers and sister they built the main lodge and were open for business by 1915.  The construction and operation of Rainbow Lodge could (and has) fill multiple articles but the roles of Alex and Myrtle over the decades may have been most succinctly described in “A Short History of the Garibaldi Area” by Ian Barnet: “Alex is the drinker and greeter of guests; Myrtle the business operator.”

As a person coming from an Anthropological background, I am drawn to the narratives surrounding ones life. Outside of this I am also very interested in Canadian fiction; therefore, I was fascinated to hear that Alex Philip was not just the co-founder of Whistler’s first resort, Rainbow Lodge, but was also an author (for more information on Alex’s books, visit our previous blog post here). This intrigued me to dig further into the life of Alex Philip, as being both pioneer and author seems like an odd combination of attributes. As J. Butterfield said in his column “The Common Round” in the Daily Province, Vancouver “…when you found a man who ran a tough restaurant all day and sat up to write poetry at night, you simply had to take notice.”

Alex Philip on the boardwalk in front of Rainbow Lodge, ca. 1920. Philip Collection.

While doing this research I have read and heard many stories about the kind of man Alex was, but I will keep this blog post to two news articles talking about Alex’s public life. The first is an announcement of his leaving Bangor, Maine in 1906 for Vancouver. The second is an article announcing his return to Bangor for the first time in 50 years.

In the 1906 article, published by the Bangor Daily News, the author refers to Alex Philip as Alec, as that is how he was known during the five years he worked as a night man at Frey’s Central street restaurant. A patron of Frey’s, who happened to be a journalist with the Bangor Daily News, published this article as a farewell present to Alec. It is a very flattering portrayal of Alec, stating, “He was the acknowledged super-superba, past-master, expert extraordinary lunch-bar man of Bangor. He was in a class all by himself. He got all the votes.” The article goes on to say, “Nothing phased Alex. He made no mistakes, no false motions and never lost his grip on the situation…Maine never sent out a brighter, cleaner more honest young man, who can be depended upon to make good wherever he goes–the kind which makes friends and keeps them.” 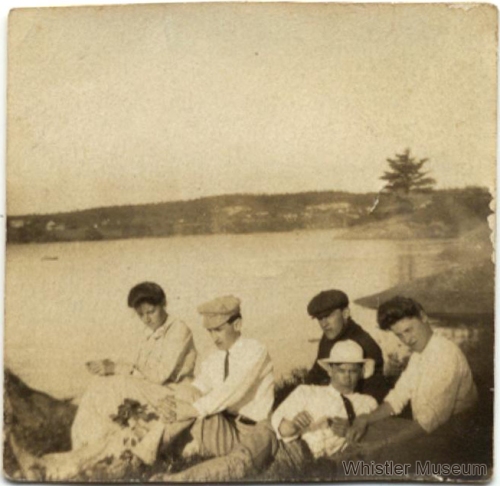 Alex Philip and friends in Maine. The annotation on the reverse reads “Alex Philip in his 20s, Bluehill Maine, 2nd from left, about 1906.” Philip Collection.

Flash forward 50 years to the Bangor Daily News article dated August 30th, 1956, on Alex’s return to Bangor for the first time since he departed for British Columbia. In this article we learn that Alex carried the 1906 article with him for the 50 years and the clipping was one of his prized possessions. He even used the 1906 article to help him get a job at the Horseshoe Café in 1907. “He still carried the NEWS clipping, yellowed and tattered after a half-century of travelling. He hadn’t discovered gold, he said, but, proudly explained how that same newspaper article had been his ticket to a successful career as a resort owner and author.”

It was in the Horseshoe Café that Alex met trapper John Millar, who described Alta Lake (at the time called Summit Lake) to Alex, convincing him and his wife Myrtle to travel north and see the area. This trip inspired both Alex and Myrtle, and soon after this first trip they settled in the Alta Lake area to begin construction on Rainbow Lodge.